She makes the little balls with extreme care, as if for a sphericity contest, and then she puts each one next to the other. This order, which she must disturb to fry them, gives her a strange sense of peace.

She chops the parsley, very fine. The parsley must be finely chopped. If not, the boy will say he doesn’t want meatballs, but meatballs are Paco’s favorite. She chops the parsley very fine, and then the garlic, smaller than the eye can see, invisible garlic so the boy won’t see and say they’ve got garlic, which is what Paco likes most in a meatball. With her hands in the minced meat, half-pork half-beef, she mixes like she did when she had time, when she mixed clay to make vases, plates, and ashtrays. She mixes, adding salt and a bit of pepper, just enough for Paco but not the boy to notice, and egg, and bread crumbs.

She mixes and, on the TV, that song is playing. She can’t remember the name but it goes like this, and she hums. She seems almost happy, mixing, clean apron on, la-la-la-ing like that, with the TV in the background and the fluorescent lights in her eyes, and the mix that, surely mixed by now, she keeps mixing because she likes digging down into the wet meat and feeling it between her fingers. The boy is in his room, on his computer, and she’s at ease because she knows he won’t hear glass breaking or shelves falling. She knows she can make dinner and even start getting lunch ready for tomorrow. She could even, if she’s quick, sit down for two minutes in front of the TV before Paco comes home and watch something, while folding the clothes, that keeps her from thinking. She thinks the boy needs a new pair of shoes, he’s grown a foot, and about the toilet chain, broken again. She thinks he’s worn out the cuffs of his coat, but it’ll have to wait a couple of months until the sales begin. She thinks about the waiter at the bar next to the factory where they have their morning coffee. He winks at her and always gives her those candies she likes so much. She thinks that now the mix is surely mixed and starts making perfect little balls, impeccable and round, which she lines up in absurd rows on a ceramic tray her mother-in-law gave her when they got married.

She makes the little balls with extreme care, as if for a sphericity contest, and then she puts each one next to the other. This order, which she must disturb to fry them, gives her a strange sense of peace. Until she hears the key in the door, the door opening, Paco has arrived a bit earlier than usual and dinner isn’t ready yet, and there are no beers left in the fridge, and there might be a foul mood all night, maybe shouting. The key in the door, and the footsteps leaving the jacket on the sofa, and Paco who goes to see the boy, and the boy who doesn’t say hello, and Paco who greets her in the kitchen, smiling because she’s making meatballs. He leans in from behind and kisses her on the cheek. There might not be a foul mood, today.

But, then, a tongue like an eel at the back of her eardrum, and hands like sharks lifting her skirts, and his member like a ferret that pries open her sex. And she who wants to say something, to say not now, that the boy will hear them, and he who goes shhhh, and she feels her whole body tightening and freezing, and she can only move her hands, which squish the perfect little balls, squirming at the pain so acute that she struggles not to scream. She thinks if she keeps still, it’ll be over soon. She thinks if she doesn’t make a sound, the boy will stay on his computer without noticing. She thinks that on the TV another song, she can’t remember the name but it goes like this, is playing, but she can’t sing because she has a lump in her throat and it won’t give.

She thinks that on the TV another song, she can’t remember the name but it goes like this, is playing, but she can’t sing because she has a lump in her throat and it won’t give.

He grabs her breasts and pushes harder and gasps, and she falls forward, almost breaking the tray. She has a finger between her lips, and bites, bites until the taste of blood is in her mouth, and then, as if from far away, the certainty that the finger is hers, because the blood has a vague taste of parsley, very fine, and garlic, invisible, but the slight pain in her finger doesn’t go away, not even a little, the pain between her legs, the feeling that her sex is live meat and that his is a ferret burrowing and biting and pushing until it bursts.

And then, quickly, he pulls her socks up and her skirts down, and tidies her hair because her bun has fallen out, hair on her face. And a kiss on the cheek, a kiss like a punch, and an I’ll go wash my hands, and footsteps in the hallway, a door that closes.

She brushes off her apron, stained by the meat, and remakes, one by one, the little balls. She makes fifteen, exactly, in three rows of five, covered in flour, white. She puts the pan on the stove and, while waiting for the oil to heat up, the boy comes and tells her he’s hungry and what’s for dinner, and if the meatballs have garlic, and if she’ll make patates rosses, and since she doesn’t respond he goes back to his room until they call him for dinner.

As the dinner cooks, another song plays on the TV. She hums along, because it goes like that, and she thinks that once it gets to the chorus she might remember what it’s called, but then the sobs begin, sobs that come from who knows where and that soak the top of her apron, sobs she swallows and that taste like salt. She removes the perfect little balls, golden, ready to go into the pot with the sauce.

When they sit down at the table, Paco winks at her, the boy pushes the chard away and says that he wanted fried potatoes and that the meatballs taste like garlic. She looks at her finger and the half-moon teeth mark. She eats a meatball, the parsley so fine, the garlic invisible, its perfect shape between her teeth. There’s no singing on the TV now. The news is on and it looks like somewhere in the world there have been wars and killings and deaths from starvation. As they eat, no one says a word, but it doesn’t matter. Tomorrow is another day and she still hasn’t made lunch.

Translation from the Catalan

Translator’s note: “Lalalà” starkly represents the emotional claustrophobia of a woman living a day-to-day situation of gender violence. The repetitive language and telegraphic clauses portray the workings of a mind under threat and at the constant mercy of an abusive husband. In my translation, I have mostly reproduced the length and pace of the Catalan sentences to represent the flitting flow of the woman’s fear and efforts to cope. 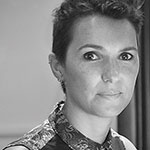 Bel Olid is a Catalan writer, translator, and professor. Through her writing and activism, she portrays the stark realities of child abuse, gender violence, and immigration, while throwing her voice behind the struggle for contemporary feminism and Catalan independence. 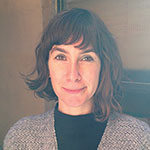 Mattea Cussel is an Australian translator and predoctoral researcher based in Barcelona. Her translation of the Spanish writer Menchu Gutiérrez appeared in Asymptote.