What a world. In life we have to make choices, face the most loathsome decisions; and, there up ahead, all you see are forks in the road. Hang a left, or maybe a right. This girl or the other one. Hold steady in this country or head back to the lands of mom and dad. Take this catchpenny job in Manhattan or the all-the-money-in-the-world-but-right-there-at-the-ends-of-it gig, smack in the middle of nowhere, way out in North Dakota or who knows where. What I really wanted, since before I was ten, was to be a writer. I simply cannot describe what I used to feel when I’d think about it. I filled whole stacks of notebooks with stories; most of them Stevenson or Salgari sequels, as you might expect at that age. Then, when I was twelve, came Homer, followed by Dante, and would you believe I even tried writing my very own epic poem in rhyming tercets. Children do these sorts of things; well, they used to at least: kids these days, don’t we know it, can’t be peeled away from their screens.

I come from the age of books. And there was nothing more important, more pressing. I would read, devour books. I would write.

I come from the age of books. And there was nothing more important, more pressing. I would read, devour books. I would write. Of course, around twenty, you become an engineer, or a lawyer, or a journalist, but not a writer. What good would that do? No good for feeding a family. Engineer, lawyer, journalist. At thirty you start having kids and a mortgage and, with a little luck, not too many problems with the wife. Come fifty and it’s time to pay the kids’ tuition, which, by and by, feels like a protracted liposuction. Next thing the kids get married and it’s so-long and good-bye, around about sixty years in the bag. All of a sudden, when you catch your breath, what’s left is to ask yourself what-all happened. What’s become of it all. Where’d it all go. Where are all those epics you hoped to pen, or the novels. There are, to be sure, some notes strewn here and there, whole mounds of the scraps of primordial works that, given a bit of time, maybe when I retire, could come into shape. Why not? The hard part is realizing suddenly that being a writer takes more than just writing or even writing well. Contacts: those damned contacts. The ones you pick up over decades of tramping on the scene; that scene you know nothing about for the simple reason that a living is made in more mundane and pedestrian trades . . . steady pay, health insurance, and a retirement plan. At this point there’s no way around it. Even so, sometimes I fantasize about one of those people I bump into on the subway, you, for example, one of those strangers we spill our guts to knowing that once we get to the station, in two or three minutes, we’ll still be foreign and nameless, any one of those people, I mean, hearing me prattle on about all this whatever it is, suddenly puts down the New York Times he was reading, gives me a smile and says: as it happens, my friend, what do you know . . . I am an editor; I work for X and Y Publishers . . . Here, take down my address; send me your manuscript, or bring it by in person whenever you like. But, of course, these things never happen. All the strangers I strike up conversation with usually react just like you: they bury their faces in the paper; move ever so slightly in their seat, discreetly inching away. As soon as the train pulls up to the station they jump up and run, gone in a poof.

And there they leave you, tongue in the breeze. 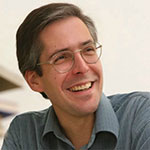 Miguel Gomes (b. 1964, Venezuela) is the award-winning author of eight collections of short fiction and one novel, Retrato de un Caballero (2015). His scholarly work has earned him such distinctions as the Orden Alejo Zuloaga, the Orden José Félix Ribas, and the José Martí Essay Award. 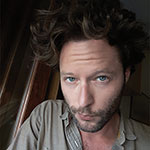 Charles LeBel is the translator of five essays published in a recent Routledge collection, and his own writing has appeared in the journals alter/nativas and Border Lines.