Welcome to the WLT Blog! 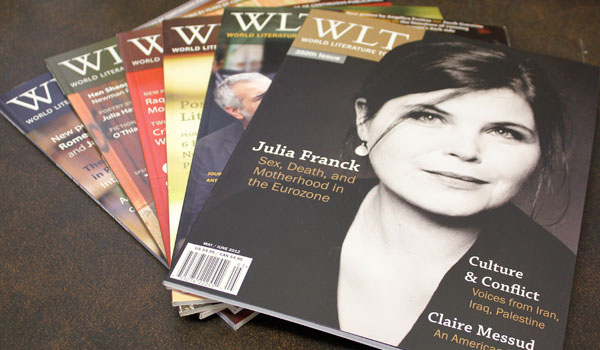 Since the early 2000s, World Literature Today has been gingerly dipping a toe into the fast-flowing waters of the World Wide Web. In the early years, we started out by hosting a basic website, with information about who we are and what we do, along with selected content from the pages of WLT. At the same time, in 2006, when we switched from a quarterly to a bimonthly publication schedule, we increased the timeliness of our coverage as a print publication. Even as we started publishing six times a year, however, we realized there’s still a lot going on in between issues, and for all its advantages, print culture remains tied to traditional modes of production and distribution, modes that have essentially been in place since the turn of the last century.

So, to take advantage of the emerging technologies of e-publishing, in August 2009 WLT launched a digital archive of the first eighty years of our content on JSTOR. And by the end of 2010, we made our current content available in two different digital platforms. Only in 2011, however, did we fully embrace the possibilities of the Internet, when Jennifer Rickard joined our team to be WLT’s first-ever digital media editor. In just over a year, Jen has dramatically enhanced our online presence, making possible what we could only dream of doing but a few years ago. In addition to spearheading a fully functional—and aesthetically pleasing—redesign of our website and monthly e-newsletter, Jen also coordinates the work of Kaitlin Hawkins, our digital media assistant, who has given WLT a consistent presence on Facebook and Twitter, and Sam Tran, our web development assistant, who is helping with behind-the-scenes functionality and architecture, including optimizing our website for smartphone users.

With these important additions to our team, WLT can now sync its coverage with the latest developments in international literature, so the inevitable next step, we thought, was to start a blog. And finally, after several months of planning and lots of discussion, it’s ready to launch. To give you a roadmap of where we’re headed, here are some highlights you can expect this week:

Week by week, then, sometimes guided by serendipity as much as design, we’ll turn to this forum to tell you what’s on our minds. In turn, we invite you, our readers, to join the conversation by not only reading our weekly posts but tuning in to the audio and video supplements found elsewhere on our site. More than ever before, we want to delight and enlighten you with the best of contemporary international literature, and hear what you have to say in response to what the editors of WLT strive to provide, both in print and online—as a cultural viaduct between writers and readers, providing bridges to understanding across languages, geographical borders, and temporal boundaries is our primary raison d’être. Add your comments, and send us your ideas for future posts ([email protected]). And let the blogging begin!