A Bolivian writer living in the United States paints a complete picture of his days in quarantine in New York, the most difficult in the city since the attack on the Twin Towers. “Just as Wuhan was the future of Lombardy, New York is that of Latin America,” he writes.

I speak to Sebastian Antezana, a writer friend who lives in Syracuse—one hour from Ithaca, where I live, both in New York state—and I ask him how many cases there are in his county; two hundred, he says, and I: there are more than seventy here. I was supposed to be in New York City this weekend, but in early March we decided to cancel the trip even though Mayor De Blasio was proudly organizing the St. Patrick’s Day parade and was encouraging everyone to go out into the street; today there are almost seventy thousand cases all over the state—more than half in New York City—as body bags pile up in the halls of a Queens hospital, while a refrigerated truck serving as a makeshift morgue sits outside a hospital in Brookdale, and the Javitz Center, the center of Manhattan’s cultural life due to its fairs and exhibitions, has been converted into a hospital. De Blasio says that this is not the time to criticize, but he must sense that he has no future once the crisis is over, nor will Donald Trump, the president who thought that the virus was the same as the flu and who articulated aloud the death drive of the neoliberal model: attempting to save the lives of a few elderly doesn’t justify stopping the economy (“the cure can’t be worse than the disease”).

The president articulated aloud the death drive of the neoliberal model: attempting to save the lives of a few elderly doesn’t justify stopping the economy.

In the distance, we can hear the ambulance sirens. Liliana is writing to an Argentine friend, a pathologist in an Ithaca hospital, to cheer him up, and he replies: “We’re hoping for the best, but we’re prepared for the worst.” We go for a walk in the town; a female colleague of Asian descent no longer goes out alone, worried about hate attacks (a Chinese family was attacked last Sunday in Texas). The cashier at the Walgreens sells me the last two packages of toilet paper and tells me that she herself only has two packages left. I approach the counter, and she steps back; she approaches, and I step back: it’s a nervous dance. On the streets of Collegetown, Cornell’s student neighborhood, there are get-togethers that take advantage of the sunny day. Every once in a while, we run into someone wearing a mask, but generally there is little “social distancing” to be seen. It must be their age, or perhaps it’s simply the feeling of exceptionalism that the United States transmits: this is the chosen country that nothing can defeat (much less a virus). But the empire was not prepared for a pandemic: with a precarious public health system, a president and a party in power that don’t believe in science, and an ethos obsessed with productivity, its response has been among the worst of Western countries. No one in these times is looking to the United States for leadership.

The empire was not prepared for a pandemic: with a precarious public health system, a president and a party in power that don’t believe in science, and an ethos obsessed with productivity, its response has been among the worst of Western countries.

One morning a couple of weeks ago, the crisis hit close to home: I had chills in bed and couldn’t sleep. I was frightened. I haven’t come out of it completely; I try to come to terms with that fragility, and I look for ways not to go down dark alleys. It’s not easy. The horrifying messages don’t stop: a colleague’s aunt in Spain who has the virus, the grandmother of a friend in California. To calm the anxiety we try to organize ourselves at home. The entrance is full of cleaning products, shoes, jackets. In the kitchen, we wash the fruits and vegetables with soap. Because the quarantine here is very lax, more a recommendation than an obligation, we make our own rules: we can only leave the house every three days. We know it’s a luxury: out there the paramedics, the supermarket employees, the garbage collectors, that entire indispensable world which sustains society and is the most precarious. But we’ve also memorized the advice of epidemiologists and virologists, and we’re confident that confinement will help “flatten the curve” and mitigate the spread of infection. Cornell realized this three weeks ago and canceled face-to-face classes; last Sunday we were asked to move our things out of the office; we weren’t to return until further notice. I helped my son Gabriel, who was living in the dorms, move home.

During the day I try to help my colleagues and students solve their problems, and I organize my virtual classes for when classes resume. Since January, I’ve been teaching—it’s not a joke—a doctoral seminar on Latin American apocalyptic scriptures that I’d been planning since October. We read Plop and watched Children of Men; we were reading 2666 when the apocalypse threw everything out the window, and my science fiction–charged class became costumbrista: a Brazilian student tells me that he feels like he’s in the pages of The Eternaut. I give them the option of doing an academic paper at the end of the semester or turning in a chronicle, a diary, or an imaginary story based on their experience during these days of the plague.

I’ve become an expert at analyzing graphs and calculating exponential increases. I learn from Singapore and Taiwan. I worry about Bolivia and the virus’s devastating advance in Latin America. I follow the local controversies: in my native city, Cochabamba, the mayor drafted an executive order calling for fasting and prayer because “only God can defeat the pandemic”; in Chile, the health minister has said, in one of the most unfortunate statements by an authority on this crisis, that the virus can “become a good person”; in Brazil, Bolsonaro’s followers organized a caravan in Camboriú to entice people to go out onto the streets; in Mexico, López Obrador immerses himself in crowds. In both the US and Bangladesh, science is struggling to make its voice heard amid political interpretations and faces a tough battle with our religious beliefs, our irrational superstitions so deeply sown over the centuries. Meanwhile, the virus continues its march: just as Wuhan was the future of Lombardy, New York is the future of Latin America—a devastating trajectory is almost inevitable for all of us.

The crisis gives us an opportunity to imagine the future and articulate strategies to build a less extractivist world, more balanced in its relationship with ecosystems, with a more just social model that gives a privileged place to health, science, and education.

Some of my friends who are fans of Žižek think that this crisis heralds the end of capitalism; I’m not sure, although I do think it is the end of the neoliberal model. The crisis gives us an opportunity to imagine the future and articulate strategies to build a less extractivist world, more balanced in its relationship with ecosystems, with a more just social model that gives a privileged place to health, science, and education. Bringing light to this world will not be easy: a social explosion is coming at a global level, as a result of the economic collapse—“This is not a recession. It’s an Ice Age,” I read somewhere—to which we must add the devastating way in which our countries’ safety nets were dismantled in recent decades. Years of borders, quarantines, and confinements await us.

Soon a Federal Express agent arrives at the door with a big box for David, the Korean student who rents an apartment from us in the house; without a doubt there are N95 respirator masks in the box as well as gloves—all the paraphernalia you can’t get here. The student just grew up before my eyes.

Editorial note: This essay first appeared on March 30 in Chile’s La Tercera newspaper. Translated by permission of the author. 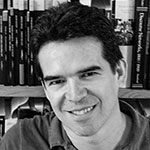 Edmundo Paz-Soldán (b. Bolivia, 1967) is a novelist, short-story writer, essayist, and editor. His work has won multiple awards, including the Premio Nacional de Novela (Bolivia). He is Professor of Latin American Literature and Chair of Romance Studies at Cornell University. Paz-Soldán nominated Mario Vargas Llosa for the 2004 Neustadt International Prize for Literature.