River of Smoke by Amitav Ghosh 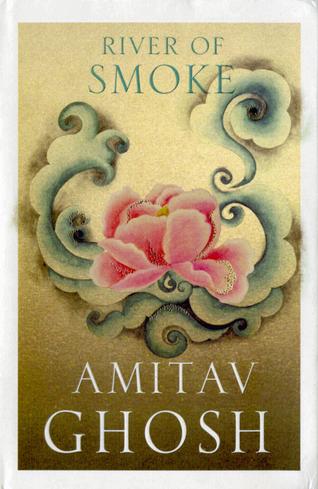 Throughout his work, Amitav Ghosh writes with a global perspective, evident not only in the range of locations and variety of characters he depicts, but also in his insistence on connections that cross presumed boundaries. At the beginning of River of Smoke, the second volume in Ghosh's Ibis trilogy, Neel, the deported raja whose story begins in Ghosh's novel Sea of Poppies, remarks of a hurricane that it is "looking for new possibilities, creating fresh beginnings, rewriting destinies and throwing together people who would never have met." This passage is vintage Ghosh, aware simultaneously of the destructive and constructive forces that bind people and histories together. ThroughoutRiver of Smoke, characters' paths cross, sometimes fleetingly and at other times in intricate and life-changing ways, as Ghosh probes the human frailty and fortitude of individuals caught up in the opium trade to China.

This novel begins with Deeti, a central character in Sea of Poppies. Her shrine in Mauritius contains pictures of characters and events familiar to readers of Sea of Poppies, but Ghosh quickly shifts the scene to Canton and the small, sometimes convivial and sometimes claustrophobic Foreign Enclave that is home to opium-smuggling merchants. While Paulette and Neel from Sea of Poppies appear frequently in River of Smoke, Ghosh introduces a wide cast of new characters, most compelling of whom is Seth Bahram Modi, a trader from Bombay who has built his fortune by selling opium in China. Bahram's story is movingly complex, and Ghosh consistently maintains a humane, rather than polemical, interest in this man who is a privileged merchant accepted by his British peers but always aware of his colonial origins, and whose love for a Chinese woman must remain painfully secret from his extended Parsi family in Bombay. In Bahram, Ghosh brilliantly captures the struggles of an individual whose desires and interests are ultimately defeated by far-reaching historical, economic, and political events.

River of Smoke is rich in historical detail and liberally sprinkled with Hindi, Bengali, and pidgin dialogue. It is told in a narrative style that wears its erudition and its political insights lightly. Paulette's quest to find a mysterious camellia plant aptly captures a theme of the novel: that the era of global modernity is about connections, accidental discoveries, and an unregulated flow of information between people who shape world history in an often anonymous capacity. Readers benefit from Ghosh's capacity to assess the costs and gains of such globalization. As a character remarks toward the novel's end, "Flowers and opium, opium and flowers! It is odd to think that [Canton], which has absorbed so much of the world's evil, has given . . . so much beauty [in] the flowers it has sent out into the world: chrysanthemums, peonies, tiger lilies, wisteria, rhododendrons . . ."