The Great Derangement: Climate Change and the Unthinkable by Amitav Ghosh 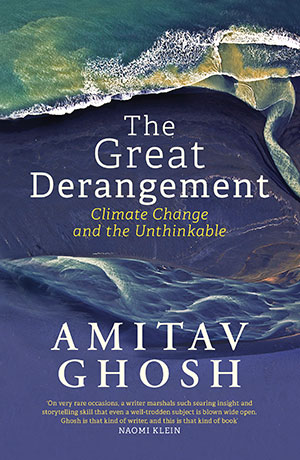 What ensues when a prolific writer often known for his literary fiction points to an aporia that has been prominent in literary studies for a while but hasn’t yet managed to gain attention? Emphasizing the erasure of the nonhuman in mainstream literary fiction where the former is relegated fit for science fiction, Amitav Ghosh’s recent work, The Great Derangement: Climate Change and the Unthinkable, highlights the limits of human vision, both creative as well as political, in eliciting a response to global climate change. Such a claim, first of all, unsettles the modern reader into recognizing his/her collusion in generating this crisis and also in its maintenance. However, before we drown ourselves in the burden of responsibility—a moral dilemma that is a panicked response to the crisis but fails to leave an impact—Ghosh’s narrative leads toward a collective imaginary. Commenting on how the “moral-political can produce paralysis” as the climate crisis gets reduced to individual preferences and any search for collective measures gets abandoned, he interrogates the “politics of sincerity.”

Instead, Ghosh situates climate crisis in the onslaught of global capitalism and, especially in the case of developing countries, in the expanding European empire, manifesting the paradoxical state of modernity today. Often in the public sphere, global climate change is made the developing world’s problem; more so because of statistical figures that reveal the alarming rise in levels of pollution in countries like India. However, this public sentiment is only selectively true as it fails to take into account world politics on climate issues. Without sounding apologetic on behalf of the developing nations, Ghosh is able to locate the central tenet of today’s climate crisis: the reliance on human-centric approaches in understanding a terrain that has proved beyond man’s control.

If this book invites us to reconfigure our idea of “political,” which continues to overlook the environment, it equally challenges us to rethink the role that global politics, with its competing power relations, would play in the turmoil and its aftermath. Ghosh’s narrative is a step toward raising consciousness in the public sphere. It will reach its impact if nation-states take cognizance how global warming might be decisive in reshaping world politics—a thought that is still “improbable” in our collective imagination