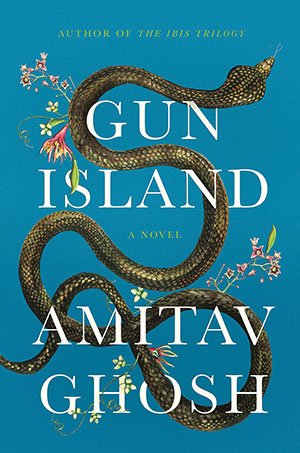 Amitav Ghosh’s latest novel, Gun Island, traces familiar crosscultural patterns evident in his earlier novels. There are journeys by land and water, diaspora and migration, experiences aboard ships, the world of animals and sea-creatures. Ghosh foregrounds environmental issues like climate change and the danger to fish from chemical waste dumped into rivers by factories, concerns that carry over from earlier books like The Hungry Tide and The Great Derangement.

Gun Island describes the quest of Deen, a scholar and collector of rare books, who returns from New York, his city of domicile, to the Sunderbans in West Bengal to unravel the mystery and legend of a seventeenth-century merchant, Bonduki Sada-gar, translated “The Gun Merchant,” and his persecution by Manasa Devi, mythical goddess of snakes. In a talk held in New Delhi after the release of the novel, Ghosh stated that the merchant “was a trope for trade.” The merchant and the goddess dramatize “the conflict between profit and the world.” In the novel, the goddess pursues the merchant to make him aware of other realities like the animal world: “Humans—driven, as was the Merchant, by the quest of profit—would recognize no restraint in relation to other living things.”

We learn that the old Arabic name for Venice was al-Bunduqevya, which is also the name for guns. Deen concludes that the name Bonduki Sadagar did not perhaps mean the Gun Merchant but the Merchant who went to Venice. When Deen travels to Venice to research further on the Gun Merchant, he discovers that many Bangladeshis are being employed as illegal migrant labor. Their hazardous journey across the Middle East and Africa and the strong, even militant opposition to their presence in the city by Italian authorities form a major segment of the second part of the novel, contrasting with the Gun Merchant’s past, prosperous journey to Venice.

Women are a stronger presence and force in the novel than in Ghosh’s earlier fiction. Cinta is a scholar from Venice working on the role of Venice in the medieval spice trade from India. Piya Roy, the cetologist from The Hungry Tide, reappears in this novel and offers the aging, lonely Deen hope of a romantic partner. Nilima Bose runs the Badabon Trust, an effective charitable organization, and Lubna is a Bangladeshi immigrant working for the cause of illegal immigrants.

In depicting a wide range of diverse characters from various countries and subtly invoking myth and history, fact and fiction, Ghosh has created a work that contrasts nostalgia for a lost past with concerns for the contemporaneous.