My dinged-up Honda sputters
to the next school, next class –
Freshman Comp 101, where students in sweats
yawn away my 8 a.m. lecture and the new recruit quarterback
slouches at his seat, texts while his girlfriend slides
her heels up his legs, tap, tap, tapping her pencil all class.

My dinged-up Honda sputters
to the next school, next office,
where the copier beeps and jams and I imagine
yanking out its wired guts, spilling coffee on its circuits,
clapping as it smokes and steams.

My dinged-up Honda sputters
to the next school, next community clinic
for a free flu shot and medicine to ease
my chronic cough. The secretary eyes my ironed
thrift store suit and tie, says, You sure
you need this service?

My dinged-up Honda sputters
to the next school, next class,
where I ghost through hallways, a blur
to full-time faculty. This time I leave
all lights on after 10 p.m., go home to red-ink
my last stack of exams. 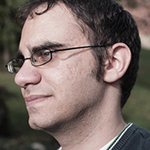 Brian Fanelli’s poetry has been nominated for a Pushcart Prize and has appeared in a number of magazines and journals, most recently Oklahoma Review, Spillway, Boston Literary Magazine, Portland Review, and Third Wednesday. Fanelli is the author of one chapbook, Front Man (Big Table Publishing), and the full-length collection All That Remains, forthcoming soon from Unbound Content. Prior to working as a full-time English instructor at Lackawanna College, Fanelli worked a number of jobs, including country clerk, factory worker, and adjunct instructor. He has an MFA from Wilkes University and is currently a PhD student at SUNY Binghamton.