Love picks its way through the gravel ruts
leading into the job site, past the truck tires
exploded nearby, the crows’ rusted voices, black
wings and feet, cottonwoods risen in ghostly
fields and the levee’s blonde lip folded over
the water. It seeks itself in random orders:
pale mist settling on marsh grass, freezing

the tattered glittering webs, ragged forsythia
strewn down the fence, raindrops fallen like worlds
without end into the distant river. The job
runs smoothly, ahead of schedule, feeder frames
built in the ceilings, underground cable
punched down and tagged. See the tiered
ladders set in place, wire spools threaded

side by side onto a length of steel pipe. See
the apprentice in line at the roach coach waiting
for everyone’s coffee. You know somewhere nearby
chaotic traffic fractures the April dawn. That the
Dow Jones ratings your paycheck depends on
cluster like blind spores swarming their prey.
That the homeless have wandered the hacked edge

of nightfall scavenging Pepsi cans. But here pairs
of carpenters level the windows and new tile work
arches its reverend glaze over the fireproof doors.
A fine rain glows in the threshold where your crew
hunches over the floor plan: four Benedictines
in speckled light, cowled in frayed sweatshirts,
Carhartt jeans, copying out last night’s changes. 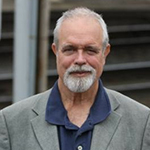 Joseph Millar grew up in western Pennsylvania and was educated at Pennsylvania State University and Johns Hopkins University, where he earned an MA in poetry writing. He worked as a commercial fisherman and telephone repairman for more than twenty years, and his accessible narrative poems, influenced by the work of poets Philip Levine and James Wright, often take working life as a means of engaging themes of class, family, and romantic love. In a 2009 interview for Pirene’s Fountain with Charles Morrison, Millar stated, “We must have the ambition for our poems that they reach toward the sublime, that they speak from our own true selves and are grounded in the experience of our daily lives, including our dreams and hopes.”