The vendor closing up on Wolfe and Monument
deconstructs the skewered souvlaki. A striped umbrella on a truck.
Someone buys a soda. Someone rents the scent of onions wafting up.
How is it upheld? This for that. The wager.

Last night a fertilizer plant exploded in West Texas. A firefighter died
in line of work. A boy watching the explosion from a car says, “Dad,
let’s get out of here . . .” and here at the Munro, waiting for the oil to be
changed from sludge, I hear it on the news along with “dis” and “dat”

is how the work attendant names the work, and from his accent I can
guess the Gullah making their migrations North, the venturing forth,
like wagons into war or into play,
like interns in their lab coats, hunched, like
students with their backpacks hinged on thumbs. Like
someone going somewhere buses run. Like

someone pledging paper. Pen, instead of keys.
One poem a day, sometimes three. 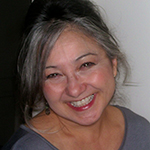