Blind dog staccato howls
in regular intervals in four-four time,
on guard like me, can’t sleep.
Am I happier here?
When in we talked like cellmates,
“How many years you got?”

Wife alongside, “Wish that damned dog’d
shut the hell up and you’d quit movin’ around.”
Her warm body lets me know
I’m back, in a bed, no chance
of hearing howling desert collies
or stuttering radio static, while waiting for word,
watching for movement,
watching meteor-bright rounds
break silence and darkness
creating momentary, blinding black
before eyes realign and rockets
shell the distance in a pop-and-flash,

like dry Oklahoma thunderstorms
casting repeated shrouded lights
through wooden window blinds.
Sitting-up-sleep, head resting
on a salt-stained, flack-vest pillow
visions cast of wife, son, daughter,
causing gloved fingers to curl
around cool eighty-degree air,
pang of home up in a pop,
a flash on the horizon,
am I,
am I happier here? 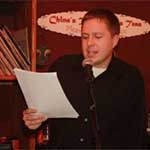 Jason Poudrier is an Army veteran and Purple Heart recipient. He has authored two poetry collections, Red Fields (Mongrel Empire Press, 2012) and a chapbook, In the Rubble at Our Feet (Rose Rock Press, 2011). In 2013 Red Fields was awarded the Eric Hoffer Montaigne Medal, short-listed for the Hoffer Grand Prize, and awarded an honorable mention in the poetry category. Poudrier has been selected twice to participate in the Kurt Vonnegut Memorial Library’s Healing Through the Humanities event.