African Lives: An Anthology of Memoirs and Autobiographies 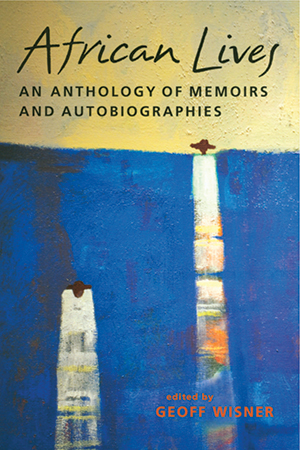 In African Lives, Geoff Wisner’s selection of memoirs (inclusive of an interview, a speech, and court testimony) and autobiographical works answers the need for a collection of “true-life narratives” about the people of Africa. The anthology contains forty-eight works of nonfiction that span the continent during various times in its turbulent history. It is an amazing anthology—a cacophony of African voices in splendid diversity as vast as the continent itself.

Geographically divided into north Africa, west Africa, central Africa, east Africa, southern Africa, and South Africa, the anthology includes the works of celebrated authors, common people, and leaders who share the particular intimacies of their lives. In “Machete Season,” Jean-Baptiste Murangira recounts his participation in the genocide in Rwanda. In “Encounters,” Mohammed Dib (Algeria) describes his first encounters with Europeans. Nisa shares her life (with Marjorie Shostak) of hunting and gathering during the early twentieth century in Botswana. Like Nisa’s account, Tepilit Ole Saitoti’s “The Worlds of a Maasai Warrior” is moving in its simplicity, with the attendant theme of survival and longing.

One of the most powerful pieces in the collection is Chimamanda Ngozi Adichie’s (Nigeria) “African ‘Authenticity’ and the Biafran Experience.” Echoing Chinua Achebe and Ngugi wa Thiong’o, among others, Adichie writes, “The problem with stereotypes . . . in literature . . . is that one story can become the only story: stereotypes straitjacket our ability to think in complex ways.” Rejecting the notion of monolithic authenticity, she asserts that “to be an African in precolonial Africa was not one single thing.” Emily Ruete’s (Tanzania) “Memoir of an Arabian Princess from Zanzibar” is touted as being the first biography of an Arab woman ever written. Similarly, Ruth First’s (South Africa) “117 Days” recounts her experience of being the first white woman ever to be detained under the apartheid government’s ninety-day detention law.

In his interview, Ousmane Sembène (Senegal) explains that “creation is never detached from the social context of the man himself.” Ngugi wa Thiong’o observes during his prison stint, “A writer needs people around him. He needs live struggles of active life.” Compared with fiction, Wisner reasons that nonfiction is not taken seriously as an art form. Judging from the recent memoirs of lost boys, boy soldiers, and women of the continent, this state of affairs is surely changing. Wisner concludes that the “best African memoirs, like the best memoirs from anywhere in the world, are literature, but they are a kind of literature that is complicated by social and political dimensions.”

Geoff Wisner has made a wonderful contribution to the emerging tradition.