The Donkey Lady and Other Tales from the Arabian Gulf 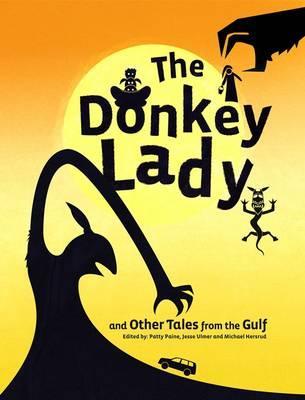 This is a beautifully produced book with large-size pages and glossy paper. It contains sixteen tales, most of which are accompanied by several color illustrations along with a few black-and-white ones. Funded in part by a grant from the Qatar National Research Fund, The Donkey Lady and Other Tales from the Arabian Gulf is the result of a collaborative project undertaken by a group of professors at Virginia Commonwealth University in Qatar as editors, with the help of Sara Al-Mohannadi at Qatar University as joint monitor and coordinator of story collection and translation. Students at Qatar University collected the oral stories in Arabic from relatives and other members of their local community and translated them, and then art and design students at Virginia Commonwealth University in Qatar edited and illustrated the stories, guided by their professors.

The stories are of varying lengths, folktales told to children in Qatar and other countries of the region for entertainment and inculcation of cultural values and traditions. Like other folktales of their genre in the world, they have their fair share of imagined beings and relationships but also local scenes and characters depicted intelligently by the illustrations.

“The Thieves and the Tree Trunk,” for example, is a story whose events are said to have happened in Doha, Qatar, in the pre-oil era. Two thieves overhear Abdulrahman and his friend, Musaed, sitting in a café, and learn that the former will be going to India for a couple of weeks on business. The thieves decide to rob his house while he is away. Abdulrhaman’s wife, Fatima, expresses fears to him about staying at home alone in his absence; he tells her that he can be in Doha and India at the same time and that the tree trunk in the middle of their yard will be her protector. Though surprised, she brings him his ghutra (headdress and black rope) and his thobe (long robe) as he requests, and he clothes the tree trunk with them to appear like a man standing in the yard. After he leaves for India, the two thieves peek in over the yard’s wall, but on seeing what they think to be a man, they leave and return the next night—only to do likewise for two weeks. In the vegetable souk (market), the two thieves overhear Fatima telling her friend, Mariam, about her husband’s clever trick; so the thieves are emboldened and go to the tree trunk on the next night. But as they kick and hit it, laughing and joking, Abdulrahman—who had returned home that morning—runs into the yard and beats them and, with Fatima’s help, ties them up as their daughter, Dana, looks on with pride.

This simple story is enlivened not only by the dramatic illustrations but also by the use of dramatic conversation in seven successive scenes, as in a play, rather than by narrative reporting as in the other stories of the book.

This anthology is a delightful collection of children’s folktales of the Arabian Gulf region. Its stories are beautifully rendered into English and should be of interest to readers of all ages.