The Dual Realm by Paola Capriolo 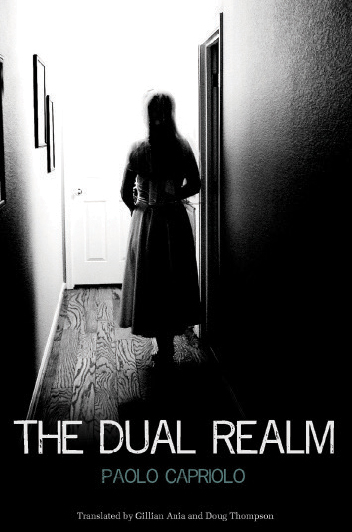 Paola Capriolo’s The Dual Realm was first published in Italian in 1991 and translated into English by Gillian Ania and Doug Thompson in 2000. The duo’s translation has now come out in a second edition through Troubador’s Storia series. Both Capriolo’s haunting narrative and Ania and Thompson’s skillful translation hold up well. They are complemented by an updated author’s preface, translator’s note, and, most significantly, an extended afterword by Ania, a noted Capriolo scholar.

The Dual Realm is a diaristic work written in the voice of its protagonist. It does not contain chapters but is divided into two parts, the first of which begins as the protagonist, a woman of about thirty, meanders through an unidentified, and seemingly uninhabited, coastal town. As she stares out toward the sea, a wall of water gathers and begins its approach. Running to ever-higher ground, the protagonist finds herself at a hotel unlike any other, where she is to remain a guest—perhaps the only one—for a very long while. As the days pass, she observes the uniformly polite and distant waitstaff, wanders the hotel’s labyrinthine halls, and eventually explores its library, full of books in an undecipherable language.

Part 2 adopts a new dimension as three other guests arrive, guests who still seem connected to a reality outside the hotel and encourage Cara—“dear one,” as they take to calling the protagonist—to return to that reality with them. Confronted with the possibility of reentering life outside of the hotel, Cara must assess the relationship she has developed to the place: whether it is the hotel that holds her captive or simply her own desire for escape.

Capriolo’s text is mesmerizing as it unfolds, its mystery never fully clarified yet somehow resolved by book’s end. Through Cara’s musings, it explores the arbitrariness of words, the fallibility of memory, and the dubious utility of social identity, particularly regarding gender. As she notes regarding men and women: “There probably isn’t any clear distinction; it will be more a question of opposites, such as day and night, which are only distinct from each other because the latter is characterized by slightly more light than the former.” The work often reads as a writer’s meditation on the slippery nature of language, which is especially provocative when readers recall that The Dual Realm is a work in translation. The translation itself is lovely, with only the odd incongruence or two. In particular, it captures Capriolo’s refined, evenly paced syntax, for which the author stands out among her contemporaries.