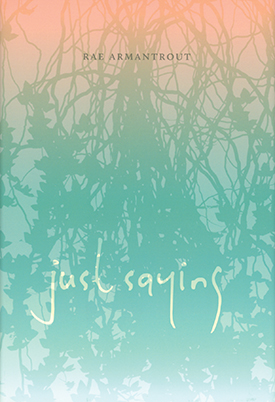 The contemporary tagline “Just saying” adds cheerful sarcasm to any observation, disavowing the authority or urgency of the point being made while calling attention to that point: “Next time you might want to hire a professional. Just saying.” Rae Armantrout’s title suggests more than sarcasm, recalling William Carlos Williams’s “This Is Just to Say,” a poem in which “just to say” is merely to say, merely to utter words (which cannot make up for stolen plums). But what is “just to say” in Williams’s poem is also right, true, measured to and befitting circumstances. As Armantrout writes in the poem “Circulating” (turning a mantra of national security into a poetics), “See something, say something. // Jotting in a notebook.” It is necessary just to say, even if poetry makes nothing happen.

The sixty-seven poems of Just Saying tend toward short titles (often announcing a field of inquiry), short lines, and short, fragmentary sections that form (to borrow from George Oppen) discrete series, inviting the reader to consider oblique relations among parts. “Accounts,” for instance, places us in the territory of explanation, narrative, and reckoning. The poem begins as a creation story, as light gets “tangled up” and breaks into “brand-new things.” An impossible question about motion and matter arises: “How could speed take shape?” A voice interrupts: “Hush! / Do you want me to start over?” Is it a parent who speaks? Or the moody deity of Genesis, responding to human unruliness by threatening to destroy the world? The poem closes with an image of God balancing his checkbook and “encrypting his account.” He too must protect his data from attack.

Just Saying is attuned to the facts of life in this twenty-first century: Clear Channel, downsizing (“To each his own / severance package”), the ping of network communication, tweets, vampire fiction for young adults (now a product category in the United States’ last major bookstore chain). These details are present in Armantrout’s poems not as occasions of easy irony, not as objects of angry indictment, but as elements in “a permanent tizzy” of stimulus and response. Armantrout has written of her interest in the poetic line “as it conspicuously encounters the void of the white page, uncertain what comes next.” Like Stephen Dedalus making his way along Sandymount Strand, this poet finds her way moment by unexpected moment:

This train of thought
is not a train,