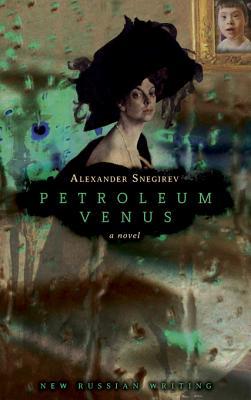 Alexander Snegirev’s Petroleum Venus stands out against the backdrop of Russia’s contemporary literary scene, where conceptual postmodernism is still in vogue. In contrast, this slightly absurd but character-driven novel seems positively realistic. Even as Snegirev builds a world where oil takes on mythic status—where the physical processes that turn organic matter into fossil fuel connect the past to the present more powerfully than cultural heritage or shared experience—he never loses sight of his characters.

He builds the novel around the tender, loving relationship between the narrator, Fyodor, and his seventeen-year-old son, Vanya, who has Down syndrome. After Vanya’s mother abandons them and Fyodor’s parents die, the two are left alone in the world. Fyodor, like any parent, gropes his way through anxieties, frustrations, and fears, while Vanya’s disability provokes poignant moments of public embarrassment, self-doubt, and utter confusion.

This well-observed portrait of single parenthood unfolds in a Moscow charged with symbolic potential. Magic and the supernatural lurk just out of the characters’ reach, creating a world that feels real but slightly out of joint. Vanya’s Down syndrome alerts him to the mystical connotations of the material world. A pendant from his grandmother can tell the future, and “evil forces like witches have fused in [his] brain with suicide bombers into a single deadly danger.”

Everyday objects threaten to pull characters into another world. Chief among them is the “Petroleum Venus,” a portrait of a nude woman drenching herself in crude oil painted by a stylish Russian artist. When Vanya brings the painting home, he says he found it by the roadside. But it soon turns out that he snatched it from the wreckage of a car while the artist was expiring in the driver’s seat. The purloined painting sets off a series of coincidences, leading Fyodor through many encounters (including a very bad sex scene) to the novel’s somewhat overwrought climax.

At times, the plot’s peregrinations expose Snegirev’s youth and inexperience, but the power of his imagery saves the novel. The book’s title image endows oil with almost mystical significance and connects the material world to something beyond. Oil is both part of reality and something almost supernatural.

This is the liminal space of Snegirev’s realism. The characters live and breathe in a palpably real world. At the same time, it is a world trembling with symbolic undercurrents, poised, it seems, to burst at any moment into another realm. Petroleum Venus is a tightrope walk along this boundary line. Snegirev manages to keep the absurd at bay by focusing on the loving relationships between his characters and showing how the supernatural can be part of a compelling human experience.