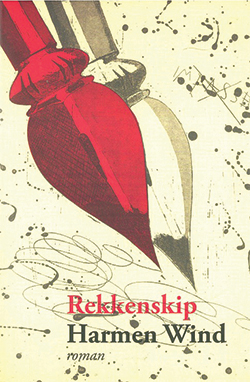 Daniel Mûnema, the main character of Rekkenskip (Calling to account), is very much in search of the self he has been and should have been.

Daniel’s circumstances precipitate his search. Left alone in his house that now sits forsaken at the edge of a vast emptiness where once his factory stood, he senses with profound regret that the happiness of family, workplace, and community has already been out of reach for many years: the children have grown up, his wife has died, and the business is gone. “Here I am,” he thinks, “a man without a wife, a dad without kids, a son without parents, a director without a business, an old man without a future.” In the community, he is known as a “man without guile.” But he wonders and is intent on spending the rest of his life finding out the truth.

The author conjures up appearances from Daniel’s past: an ill-motivated toothpaste prank, a fatal accident and his complicity, a college lover with whom youthful lust was mistaken for love, a former employee whose grudge turns into treachery and murder, his children who remind him of past neglect. Not all of these “appearances” are equally realistic, but they serve the author’s purpose of intensifying Daniel’s existential quest of searching for his true self and the meaning of his life.

He decides he must write a book as a medium for his search, in which he hopes, like Adam, to have his eyes opened and achieve true self-awareness. He starts out by writing a series of seemingly unconnected fables, but which upon closer inspection all deal in one way or another with being true to oneself or paying the price. He senses that he has not lived up to his calling to be a real human being.

Like Daniel in the Old Testament, he finds himself in a den, but a snake den, and he writes to get out. He should be making a ladder, he thinks, but he’s only managed some loose parts. When in a dream he encounters two selves, one who lives for himself and the second who lives for another, he knows that he cannot live without the second. His eyes begin to open. The second self leads him to the truth he’s been searching for, so that he is able to say at last, with God, “I am.” For though Daniel claims not to believe in God, his search has included God, the God “we have imagined . . . as our perfect self. Therefore we’re trying to become who we really are in order to find God. Isn’t that what [I] am after in [my] book?”

In the end, his thoughts go back to a time in his youth when the second self experienced fulfillment by serving the needs of the emotionally disturbed in a Christian institution. At bedtime he had helped them pray, “I lay me down to sleep at the sinking of the sun . . . please forgive me all the wrong I’ve done.”  When shortly thereafter a heart attack strikes him, his last thought is, “I lay me down to sleep . . .”

This is clearly a theme-driven novel whose incidents and actions and dialogue sometimes seem like constructions to carry the primary motif of a search. It may not be unfair to think that the author closely identified with his character. For Wind was suffering from a terminal illness, from which he passed away before his last book could be published. The author, well known for his many books of poetry and fiction and the recipient of many awards and honors, will be missed by his many admiring readers.