To Show and to Tell: The Craft of Literary Nonfiction and Portrait Inside My Head: Essays by Phillip Lopate 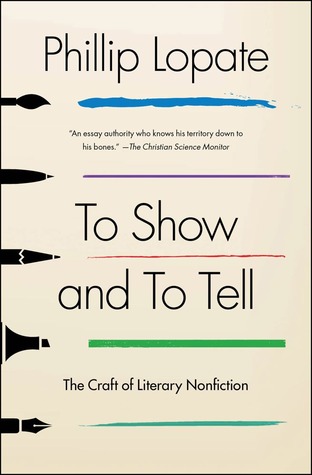 Although Phillip Lopate regards his personal essays as literary—as opposed to creative—nonfiction, his creativity is very much in evidence. The essays unfold like conversations, with the writer as an “I” and the reader as a “you,” responding internally to what has been rendered externally. The best essayists—for example, Montaigne, Lamb, Emerson, E. B. White, Cynthia Ozick—have mastered the technique of making the reader an auditor—mulling over, underlining, and annotating a text on the printed page that is simultaneously heard in the mind’s ear. The best personal essayists—and Lopate is among them—admit the reader into an egalitarian living room—not an elitist salon—where they enjoy a conversation involving the eye, the ear, and the mind. Nor is the conversation one-sided; the reader-auditor responds in a variety of ways: quizzically, meditatively, gesturally, laughingly, or even profanely. Lopate is not meant for the silent.

Since publishers have now acknowledged the essay as a literary form worthy of being incorporated into freshman readers, they should consider using some of Lopate’s from To Show and to Tell. Unlike trendy essays selected for one edition and replaced in the next, Lopate’s do not date because he has distilled the personal into the universal. Anyone who has ever tried to remember the past, much less write about it, knows what it is like to embark on that ghostly venture. You hear a voice in the mind’s echo chamber. “Who sent me that voice?” Lopate asks in “The Made Up Self: On the Difficulty of Turning Oneself into a Character.” The voice is single-tongued but capable of many inflections and nuances. This is the kind of essay that will inspire students to listen for an inner voice that may not be familiar but is still intelligible, beckoning to depths yet to be plumbed.

Since many courses require students to keep journals, “On the Necessity of Turning Oneself into a Character” is ideal for anthologies. A journal entry crafted as a minidrama, purged of the irrelevant and the nondramatic, will have a vividness, an immediacy, and perhaps even an art that would not have been possible if it were just another diaristic response, rooted in subjectivity.

The essays in Portrait Inside My Head are personal but pensive. Lopate, adopting an older and wiser voice, reflects on his youth, his marriages, his beloved Brooklyn, the poet he once was, and the critic he still is. These essays possess the maturity that comes from both age and subject matter, the latter of particular importance in this collection, which crystallizes the essence of Lopate’s art: his ability to begin with a topic that he approaches like a cubist, seeing it from different perspectives, and then using it as a point of departure for another topic that seems unrelated but is as much of a derivation of the first as a corollary is of a theorem.

“Wife or Sister? Abraham and Sarah in Egypt and Gerar” begins with the biblical account of Abraham and Sarah crossing into hostile territory (Egypt), where he passes her off as his sister. After summarizing the scholarship, Lopate examines the nature of the husband/brother, wife/sister relationship, pondering the possible evolution of husband into brother and wife into sister, and drawing examples from both literature and life. In Paul Bowles’s The Sheltering Sky, a marriage of codependency—from which sex has all but varnished, except with other partners—ends nightmarishly with the husband’s illness and death and the wife’s ravishment. Lopate proceeds to a similar but less tragic experience in Morocco—where he fell ill like Bowles’s character, and his first wife went off to hear native music and was almost raped—causing the author to wonder if he behaved more like a brother than a husband. Is the spouse of one’s youth the sibling of one’s age? Does the transference begin earlier, perhaps at the very start of a relationship? Overwhelming questions, eloquently posed.