Tiananmen Fictions Outside the Square: The Chinese Literary Diaspora and the Politics of Global Culture by Belinda Kong 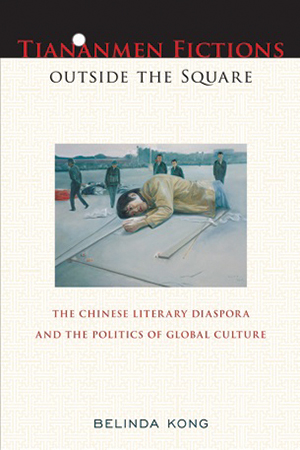 June 4, 1989, remains a day of infamy for the Chinese government. The Chinese army opened fire that day on Chinese citizens (workers, residents, and students) just outside of Tiananmen Square for demanding “democracy” (which remained an inchoate concept for the Tiananmen protesters). The events that took place on June 4 were for a long time shrouded in mystery, with Chinese and Western media vying for representational authority, but the truth has slowly surfaced. It is a day that set in motion a collective emigration of political dissidents, intense long-distance criticisms of the CCP, and new modes of writing in the Chinese diaspora.

This is the argument that Belinda Kong makes in her excellent Tiananmen Fictions Outside the Square. Her focus is on delineating the afterlives of the Tiananmen killings in writings from the Chinese diaspora. She surveys writers based in the United States and in Europe (England and France) though she includes only English-language texts, some of them translations, in her analysis. Kong’s aim is to provide a solid introduction to a “distinctly politicized Chinese literary diaspora” brought into being by Tiananmen. Her approach is primarily text-centered. She reads plays and works of fiction in conjunction with various materials that explain their literary and historical contexts, including literary precursors, nonfiction writings by the authors she discusses, theories of diaspora, and extant discourses on the history of the Tiananmen demonstrations.

Chapter 1 offers a reading of Gao Xingjian’s play Taowang (Escape), commissioned by the American Theatre Group. Chapter 2, possibly the best chapter of the book, turns to Ha Jin, an American counterpart to Gao in the sense that he writes in the language of his adopted country in the post-Tiananmen era and his literary accomplishments have been broadly recognized in the adopted nation. Chapter 3 discusses Annie Wang, who, like Gao, receives an ambiguous appraisal from the author. The last chapter discusses a text dealing mostly directly with the history of Tiananmen, namely Ma Jian’s Beijing Coma (translated from Routu, its Chinese title).

Tiananmen takes on a number of guises in Kong’s critical language, both a site of the literary imagination and that of existential, political struggles on national and global levels. Kong illuminates the conflicting features of the literary diaspora that Tiananmen gave rise to: self-exoticization and melancholic repetition-compulsion on one side and a simultaneous critique of Chinese authoritarianism and global neoliberal capitalism on the other. However, even as Kong theorizes her terms carefully for the most part, she does sometimes resort to unexplained political clichés such as totalitarianism and authoritarianism in her comments on contemporary China. Her contextualization of literary texts, as a result, slackens in rigor at certain points. A flaw like this, no doubt, should not eclipse the general high quality of the book.