Deciding to throw off life’s stagnation, a woman moves from Finland to Italy and takes up tossing coins in fountains. But just how much change can she make when she takes herself with her?

Suddenly, in the middle of life’s cozy stagnation, a letter from her sister arrived and she left off vacuuming the entryway floor. Her sister was a successful international surgeon. As she read the letter she at first felt a sting of envy so sharp that she had to sit down, then felt guilty. She really should be able to be happy for her sister, who had, after all, in the midst of her busy life, taken the trouble to write a real letter and send it from distant foreign lands all the way to isolated Finland!

Her sister said she’d had a baby three years ago and last year had moved with her architect husband from New York to Paris to begin work as the chief physician at a hospital there. Mrs. Chief Physician complained about how hard it was to find reliable childcare in a new city.

The last part of the letter was for some reason written in French. Unfortunately, she couldn’t understand a word of it. She pressed the letter against her chest and sighed. Perhaps she would go to the bookstore tomorrow to buy a French dictionary and try again.

As she walked through her apartment, she cursed the furniture that knocked her in the shins and covered her legs with bruises. Then she apologized to the furniture.

She didn’t want to be ungrateful. Her furniture was, after all, awfully lovely and useful and existed entirely for her. The bowlegged sofa was particularly fine; she sometimes leaned over and whispered secrets to it and caressed its deep brown lacquered curves.

Sometimes she scoffed at herself: What kind of person treats her furniture like friends? Then she would come to her own defense—it wasn’t as if she imagined they were living creatures; she just felt there was no need for a well-behaved person to be rude, even to inanimate objects.

She remembered hearing that a person’s true nature came out when no one was watching.

The letter troubled her. She didn’t often receive letters. When the mail came every morning, around 10 or 10:30 depending on the carrier and the day of the week, she had to make an effort to wait until the mail carrier had left before rushing to the door. She received mostly periodicals. She subscribed to about twenty—she enjoyed making telephone solicitors happy. A mountain of publications piled up on the entryway table—newspapers, comics, women’s magazines, newsletters, and even a couple of hunting and fishing magazines, although she hadn’t been fishing since she was a little girl. She only had time to read a few of them, but she saved them all. It would have felt wrong to throw them away without reading them; a lot of people had worked hard to produce them.

She felt a pain in her ovaries and wondered whether she had cancer, or if her childlessness was causing psychosomatic symptoms. It couldn’t be a sexually transmitted disease, because she hadn’t had sex in fifteen years. Not even with herself. That sort of thing had always seemed dirty and pathetic to her. If you couldn’t get another person to touch you, then you could jolly well do without the whole business.

She read classics of psychology and wondered whether she was what Freud would have called a hysteric.

Then one night she couldn’t sleep and lay awake till morning, coming to the conclusion that she should leave her old life behind and start anew. She got dressed, withdrew her savings, traveled to Rome, flopped on a hotel bed, and got a good night’s sleep. Her first morning in the city she went on a guided tour, threw coins into a fountain, smiled at passersby, drank a cider at a sidewalk taverna, and went back to her hotel.

She kept her room clean and orderly so she wouldn’t be too much trouble for the cleaner.

From the hotel room window she could see a cathedral on the other side of the plaza that had been built some centuries ago. She smiled at the cathedral; it was beautiful.

She read a book that she had brought with her for a little while and then went to sleep. The next morning she went to the window, took a deep breath, and decided to live in Rome.

Her days were colorful and happy ones. She was wild and free! She felt so completely changed!

Her days were colorful and happy ones. She was wild and free! She felt so completely changed!

Every day she went on guided tours, threw coins in fountains (she found many new fountains), and drank a daily cider before turning in for the night. She had her eye on a little room a few blocks away that was going to be available soon. Until then, she could live in her hotel room.

She decided to go crazy and try a different cider every day.

Before falling asleep, she always went to the window to wish the cathedral good night; if she left out this ritual, she couldn’t sleep.

One afternoon a Roman approached her as she was sitting in front of the taverna drinking her cider, watching and listening to the people passing by. They chatted for a few moments about this and that in Italian—the book she had been reading every evening for the month she had been in Rome was a textbook in Italian, so she was already starting to master it quite well. The Roman asked her name, and she was horrified to discover that she didn’t have one. Then she remembered.

Her name sounded odd as she said it out loud. It silenced the people around them, and a group at a neighboring table turned to look.

The few moments stretched to two hours, and finally the Roman looked into her eyes, smiled, and suggested they meet that evening.

Oh, how she liked this Roman, who was so extraordinarily pleasant and fascinating and aroused all sorts of feelings within her. The thought of diving into Rome’s nightlife, however, made her nervous.

She wanted to suggest meeting the next day instead, but she couldn’t think of the words to say in Italian.

She was a new person now, confident and self-assured, the heroine of her own life, so it was out of the question for her to look silly, unable to speak Italian.

She was a new person now, confident and self-assured, the heroine of her own life, so it was out of the question for her to look silly, unable to speak Italian. Unfortunately, all the Italian words and sentences had flown from her mind like pigeons startled by the scooters on the Piazza Navona. The only fluent phrase she was able to form at that moment was a polite refusal of an invitation from page 128 of her textbook, which included a reference to a headache and a husband who had left with the children to buy some diarrhea medication and would be right back.

The Roman got up, said he understood, complimented her Italian, and left.

The days passed, until one night after she had already gone to bed and fallen asleep, someone started to tear the night to shreds. She woke up to a sound of paper. And then a wind came scrambling up out of the catacombs, where it spent the dark times, and gathered itself up, and circled the cathedral three times.

When she looked out the window, the sky was filled with swirling black chaff.

Translation from the Finnish
By Lola Rogers 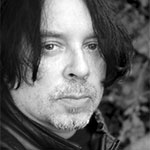 Lola Rogers is a freelance literary translator living in Seattle. She has translated ten novels, including Pasi Ilmari Jääskeläinen’s The Rabbit Back Literature Society (Lumikko ja yhdeksän muuta) for Pushkin Press (2015), and contributed translations of fiction, nonfiction, and poetry to a variety of journals and anthologies.