Secret Passages in a Hillside Town by Pasi Ilmari Jääskeläinen 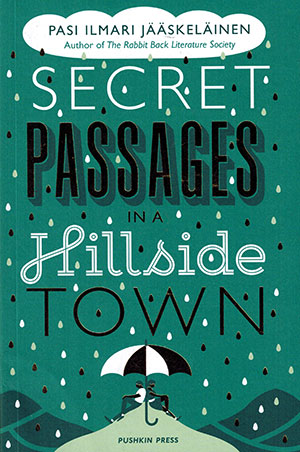 In this English translation, protagonist Olli Suominen of Book Tower Publishing loses umbrellas and joins a film club by mistake. His wife, Aino, a teacher, peruses Facebook. Their son, Lauri, is in nursery school. The family lives in the Finnish Lakeland city of Jyväskylä, “a monument to dull ordinariness.”

Via waking dreams, childhood memories return. Olli views his new Facebook friends more closely. He and those Blomroos siblings were part of the Famous Five, he realizes. Then it hits him: Greta Kara was his first great love—the girl in the pear-print dress. Events conspire to separate Olli from his family. Magical realism ensues as everyone searches for “cinematicness” and “meaningfulness particles.”

The book, perhaps longer than necessary, concludes in a maze of alternative endings until the credits roll in “quite a cinematic moment.”

Jääskeläinen’s first book translated into English, The Rabbit Back Literature Society, was a genre mash-up: a surreal fantasy metaphysical murder mystery. Similarly, there are multiple ways to frame the unique, shapeshifting Secret Passages.

On the surface, the book is an amusing story of a grumpy man’s midlife crisis à la Fredrik Backman’s Ove. On another level, the novel’s a lurking childhood mystery in the style of Per Petterson’s I Refuse. Look again, it’s an exploration of memories reminiscent of Haruki Murakami’s Colorless Tsukuru Tazaki. Go deeper for a psychological examination of gender harking back to Ursula K. Le Guin’s The Left Hand of Darkness. Crawl far enough into the warren maze of Jääskeläinen’s plot and uncover a parody of data analytics, Facebook, cinema, and book publishing echoing the best of William Gibson—with a touch of Anaïs Nin.

Jääskeläinen embeds social commentary and a soupçon of gothic horror. Metaphor abounds: as Olli reviews childhood, neuroplasticity kicks in, etching memories into the neural pathways of his brain—where so many secret passages exist.