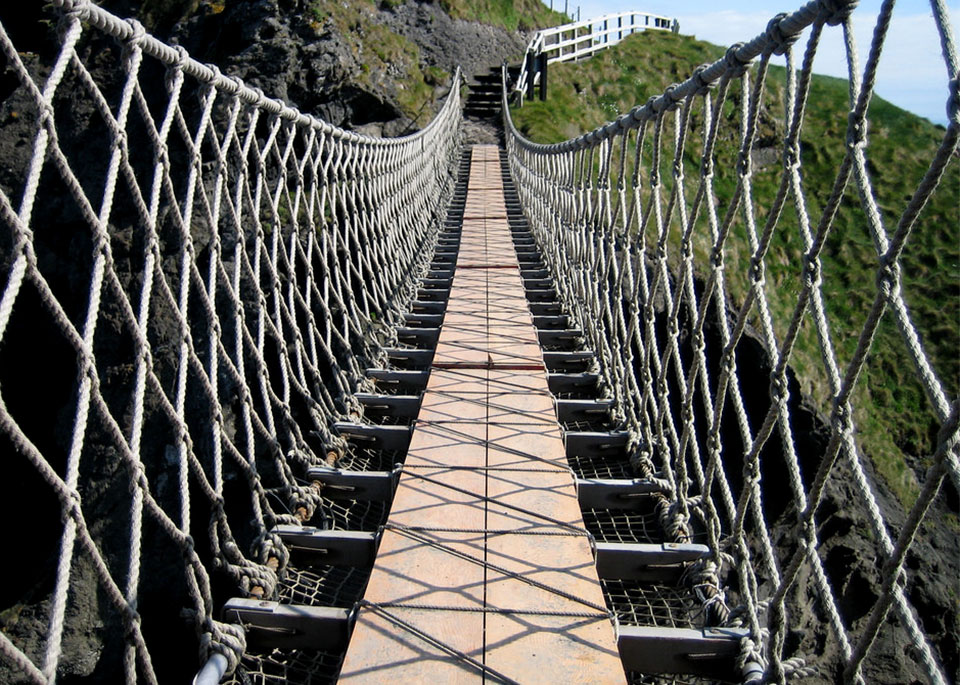 Behind us a sea-cliff, landfall, ahead the wind,
tar-smoke, the sea, a carrick.
We sway on a bridge between them
above a great shattering. We have left
the verge, our certainty, and walk across
a chasm to the cries of cormorants, fulmars,
the wings of mute swans singing in flight.
Below us bladder-wrack, sea-froth and dulse,
sea against rocks in heave and salt, and between
bridge and sea an abyss we cross, as behind us
the headland recedes – cottages and boats, clouds and sheep,
a piping of oystercatchers dying out, and the callings
of kittiwake preparing to leave their nesting ground.
The bridge rises and falls with our steps, moving in wind
so we must hold fast the ropes
once made of hides and the hair of cows’ tails
hoisted over the silvering salmon as they leapt
into bag-nets too heavy to lift, hauled
across this very bridge that rings in wind
like ship’s rigging, volary of rock pipits,
bazaar of guillemots, colony of puffins,
and in the blackest water below us ghosts
of salmon, empty nets, and on the carrick
ruins of boats, nets, buoys and fisherman’s bothy.
We have only to keep walking for the bridge to go on.
The carrick is a foothold in the distance, a stone in time.
When we reach it, not only may the salmon return
but you will be alive again, wake me when we reach the carrick.

There is no album for these, no white script on black
paper, no dates stamped in a border, no sleeve, no fire,
no one has written on the back from left to right.
Your hair has not yet fallen out nor grown back—
girl walking toward you out of childhood
not yet herself, having not yet learned to recite
before others, and who would never wish to stand
on a lighted proscenium, even in a darkened house,
but would rather dig a hole in a field and cover herself
with barn wood, earth and hay, to be as quiet as plums turning.
There is no calendar, no month, no locket, but your name
is called and called in the early storm. No one finds
you no one ever finds you. Not in a small grave
dug by a child as a hiding place, nor years
later in the ship’s hold, not in the shelter, nor high
on the roof as the man beside you leapt, not
in a basket crossing a vineyard, nor in a convent
kitchen on the last night, as a saint soon to be
murdered told you how to live your life,
never found you walking in the ruins of the blown
barracks, wading in the flooded camp, taking cover
in the machinist’s shop, or lighting every votive
in the Cathedral of St. Just, with its vaulted
choir and transept, a wall of suffering souls.
It was just as Brecht wrote, wasn’t it? “You came
in a time of unrest when hunger reigned.
You came to the people in a time of uprising
and you rose with them. So the time
passed away which on earth was given you.”
Gather in your sleep the ripened plums.
Stay behind in the earth when your name is called.

It begins with a word as small as the cry of Athena’s owl.
An ache in the cage of breath, as when we say can hardly breathe.
In sleep we see our name on a stone, for instance.
Or while walking in the rain among graves we feel watched.
Others arestill coming into our lives. They come they go out.
Some speak quietly beside us on the bench near where koi swim.
At night there is a light sound of wings brushing the walls.
Not now is what it sounds like. Or two other words.
But they are the same passerines as live in the stone eaves,
as forage in the air toward night. To see them one must not be looking.

For Ilya at Tsarkoe Selo

We stand at the casement window of Pushkin’s Lycée.
These are the desks where Pushkin wrote, his chalkboards, his astrolabe.
Snow falls from here into the past and vanishes on golden minarets.
Snow recedes from the birches. A lesson writes itself in winter chalk:
On the day Michelangelo died in Rome, Galileo was born in Pisa.
Isaac Newton was born the year Galileo died. When they searched for
the poet Kabir, they found nothing beneath his shroud but a sprig of jasmine.
Man is like the statue whispering about the marble chiseled from his mouth.
You are the guardian of this statue, standing in your silent world.
The year Isaac Newton died, there was a barn fire during a puppet show.
Kabir says all corpses go to the same place, and the world has fallen
in love with a dream. This life is not the same as your other life.
We are here now in one of the shrines of the silver poets.
You are one of the silver. The snow is a white peacock in a Russian poem.

In the library of night, from the darkness of ink
on paper, there is a whispering heard book to book,
from Great Catastrophe and The World of Silence
to The Encyclopedia of Ephemera, a history having
to do with aerial leaflets, air raid papers,
bills of mortality, birth certificates and blotting papers,
child lost-and-found forms, donor cards, erratum slips,
execution broadsides “liberally spattered with errors of all kinds”
sold by vendors at public hangings, funeralia, with drawings
of skeletons digging graves and inviting us to accompany
the corpse of x to the church of y, gift coupons, greeting cards,
housekeeping accounts, ice-papers to place in windows
for the delivery of blocks of ice, jury papers, keepsakes,
lighthouse-dues slips for all ships entering or leaving ports,
marriage certificates, news bills, notices to quit, oaths, paper
dolls, plague papers, playing cards, quack advertisements,
ration papers, razor-blade wrappers, reward posters,
slave papers, songbooks, tax stamps, touring maps,
union labels and vice cards left in telephone boxes,
warrants and watch-papers used to keep the movements
of the pocket watches under repair free of dust,
wills and testaments, xerography, yearbooks and the Zoetrope
disk also known as the wheel of life wherein figures painted
in a rotating drum are perceived to move, faster and faster
whether dancing, flying, or dying in the whirl of time. 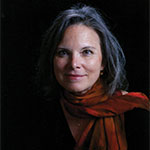 Carolyn Forché’s first volume, Gathering the Tribes, winner of the Yale Series of Younger Poets Prize, was followed by The Country Between Us, The Angel of History, and Blue Hour. Her latest collection, In the Lateness of the World, is forthcoming in 2017. She has translated Mahmoud Darwish, Claribel Alegría, and Robert Desnos. Her famed international anthology, Against Forgetting: Twentieth-Century Poetry of Witness (1993), has been praised by Nelson Mandela as “itself a blow against tyranny, against prejudice, against injustice,” and was followed by the anthology Poetry of Witness: The Tradition in English, 1500–2001 (2014). In 1998 she received the Edita & Ira Morris Hiroshima Foundation for Peace & Culture Award in Stockholm for her human rights advocacy and the preservation of memory and culture. She was also a finalist for the 2016 Neustadt International Prize for Literature. She holds a University Professorship at Georgetown University, where she directs the Lannan Center for Poetics and Social Practice. She is currently at work on a memoir and a fifth collection of poetry.