The Faces of Maigret 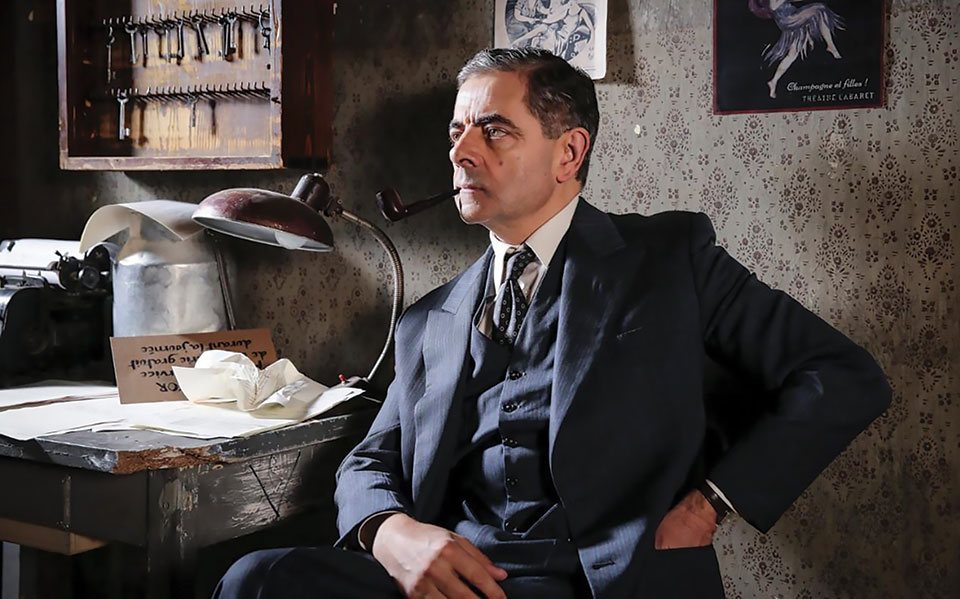 Rowan Atkinson as Maigret in the ITV feature-length adaptation of Maigret Sets a Trap.

Early last year, fans of the actor Rowan Atkinson were surprised, and many astonished, by the British network ITV’s announcement it would be airing a feature-length adaptation of Georges Simenon’s Maigret tend un piège (Maigret Sets a Trap), with Atkinson in the lead role. Atkinson has been creating notable comic characters from the beginning of his television career in 1979 on Not the Nine O’Clock News and moved on to Blackadder (intermittently from 1982 to 1989) and most memorably Mr. Bean (intermittently 1990–95 and after). He also starred in a number of feature films like Johnny English (2003, a James Bond parody) and Mr. Bean’s Holiday (2007, inspired by Jacques Tati’s Les Vacances de Monsieur Hulot). A character once seen that cannot be forgotten, Mr. Bean is Atkinson’s most brilliant creation and the identity most often associated with him. Bean speaks very little, and when he does, his words are usually unintelligible. As in Tati’s films and those of the great silent comedians, almost everything is communicated by facial expression and physical action. The idea that Atkinson would take on the role of the taciturn, world-weary detective Jules Maigret is initially so counterintuitive that one expects either total disaster or a stunning coup.

It is not as if actors haven’t played against their own popular typecasting. Dick Powell was a song-and-dance man in 1930s musicals who in the mid­-1940s revitalized his career by playing private eye Philip Marlowe in Murder, My Sweet. James Cagney began as a hoofer, became iconic as one of the tough guys of Hollywood gangsterdom, then stunned everyone when he returned to his almost-forgotten roots with Yankee Doodle Dandy. These were successful metamorphoses, but there are dozens more unsuccessful ones. Maigret seems almost the anti-Bean, and British critics were largely unhappy with the contrast. Where Bean is expressive, always seeking approval, twitchy, and childlike, Maigret is thoughtful, deliberate, and much less physically active. The Telegraph expressed the common reluctance that Atkinson was too distinctive to take on the role, which left it “sunk at the start.” The Daily Mirror summarized the critical reaction by saying he “failed to convince.” Metro, a London tabloid, said the movie “bored viewers to tears.” A Guardian headline said simply, “Zut alors!—c’est terrible!”

To be fair, the film had high ratings, and another Guardian critic blamed the script but praised Atkinson for being “deeply subtle.” The film will make its way to America eventually, probably via Masterpiece Mystery, and we will judge for ourselves. A second film with Atkinson as Maigret is scheduled, and I suspect some of the critics and bloggers will decide Atkinson has “improved” as it becomes easier to see him as the character he is playing rather than a character he has played. If he can get past that, he may face two other problems. The first is that our entertainment at present is very action oriented. Even 1950s Saturday matinee “shoot ’em ups” were slow paced compared to our current swarm of CGI-enhanced superheroes. Though traditional cozy mysteries are still very popular, the best-selling crime novels tend to be thrillers—more sensational, more violent—with a ticking clock and a desperate chase closing the story. By contrast, the Maigret stories tend toward the cerebral, even more than the Sherlock Holmes stories.

Simenon, in all his novels, is a student of the way people see themselves and the world around them, but his psychological interpretations, particularly in the Maigret novels, can be overly simple.

Another problem might be one raised by Christopher Stevens in the Daily Mail (March 28, 2016). Rather than deducing the criminal from scraps of detail like Hercule Poirot, Maigret, he points out, uses psychology. Simenon, in all his novels, is a student of the way people see themselves and the world around them, but his psychological interpretations, particularly in the Maigret novels, can be overly simple. “In his world, men are controlled by their animal lusts,” wrote Stevens. “And women are men’s biggest problem. This notion sits uneasily with modern audiences. We expect our heroes to see women as human beings, not demons sent to torment their menfolk.” Following the political maelstrom raging as I write this column, one can expect more sensitivity to this attitude, provoking a wince similar to what we now get from Sax Rohmer’s Fu Manchu novels. The “Yellow Peril” has long turned to vinegar. So has woman as the source of all sin.

Books are, of course, a product of their time. Simenon learned his trade in the age of the hard-boiled detective. Born in Liège, Belgium, in 1903, he published his first novel in 1921. The next year, he moved to Paris, began his prodigious output of novel after novel, and pursued his inexhaustible enthusiasm for prostitutes. In 1930 he created Maigret. Seventy-six Maigret novels and twenty-eight short stories would be published before his death, but these (even at the rate of three novels a year) are less than a sixth of his total number of novels. From 1945 to 1955, the great age of noir, Simenon lived mostly in the United States. Many of the best novels of the hard-boiled/noir style feature women villains of a particular sort: they manipulate men’s lust in order to achieve their ends. In the best of these novels, like The Maltese Falcon or Double Indemnity, the woman is psychologically convincing as an evil person who happens to be a woman. In others, like I, the Jury, the woman is more of an evil caricature, the female equivalent of a Fu Manchu. There is certainly a case to be made that there are evil women in this world who use their sex appeal to manipulate men. However, the appearance of this trope with unremitting regularity says something pathological about the time period that produced it, and an awareness of that pathology makes us read any portrayals of sexually manipulative females with discomfort. Moviemakers have long had no scruples about stripping away most of a character’s qualities to update the original but still exploit the famous name or title. Could Maigret still be Maigret if this underlying premise is pulled out from under him? 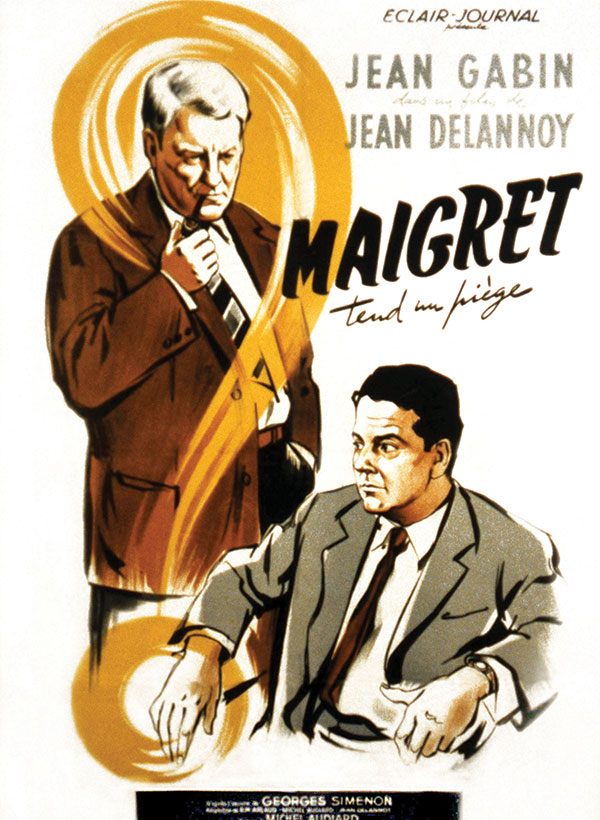 Maigret has appeared numerous times on the screen, with at least thirty-four actors assuming the role at different times. The long list of film adaptations began in 1932, only two years after Maigret was created, with the release of two films. Le Chien jaune starred the actor Abel Tarride, but Pierre Renoir, the son of the great impressionist painter, has the honor of being the first Maigret in La Nuit carrefour, directed by his brother, Jean Renoir, who became one of the world’s greatest filmmakers. Notable French actor Jean Gabin, most famous for his role in Jean Renoir’s La Grande illusion, took three turns as Maigret in 1958, 1959, and 1963, but television actors Jean Richard and Bruno Cremer are probably the most well-known French Maigrets. Richard had a long run on French television from 1967 to 1990, doing nearly ninety episodes. Cremer began in 1991. He died in 2010 after fifty-four episodes of the series.

Maigret made his way into English-language films in 1949. Charles Laughton starred in The Man on the Eiffel Tower, an adaptation of Simenon’s La Tête d’un homme. Like Richard Harris in 1988, Laughton played the detective only once. Maigret, however, proved as popular on British television as he was in France, with Rupert Davies playing him in over fifty episodes in the 1960s. Michael Gambon (who, like Harris, also coincidentally played Dumbledore in the Harry Potter films) got much praise for a dozen Maigrets done in 1992 and 1993. A couple of dozen actors in other nations have been tasked with the role, including Dutch, Russian, Czech, Japanese, Mexican, and Armenian actors. Simenon’s personal favorite was Gino Cervi, who had a six-year run on Italian television. Each actor brought his own tics to the role, though the character remains relatively consistent despite the frequent changes of face and nationality.

This might have something to do with the vast reservoir of material the hypergraphic Simenon left us. Unlike the situation with so many other famous fictional detectives, it would be almost impossible to film every story. No gun-for-hire screenwriter need make up Maigret stories to fill out a season; just grab another book off the shelf. Penguin has begun a project to translate and reprint seventy-five Maigret novels, and that in itself is admired for its ambition. Drawing directly from the author might provide screenwriters with a consistency of character in the portrayals, limiting excessive inventiveness and forcing actors toward subtleties as the only means to distinguish themselves from all the Maigrets who have gone before. For instance, Maigret is described in the stories as a big man, and most of the actors chosen for the role have been on the larger side. Rowan Atkinson’s smaller build was seized upon by some critics as one of the reasons he—quite literally—didn’t measure up. Is this detail to be the standard? There may be many flaws in the Atkinson film, but once one gets used to seeing him in the role, we may be startled by a return to bulkier Maigrets. The essence of Maigret is that he is a thinking detective. He is neither a flamboyant nor a physical presence. The stampede of police procedurals, from the late 1940s on, owes a great debt to Simenon’s approach to the often plodding character of Jules Maigret. His insights into the dark mysteries of the human heart are the character’s true identity. Maigret, whatever the details of his face, is Simenon’s tinted lens to unravel and illuminate it.