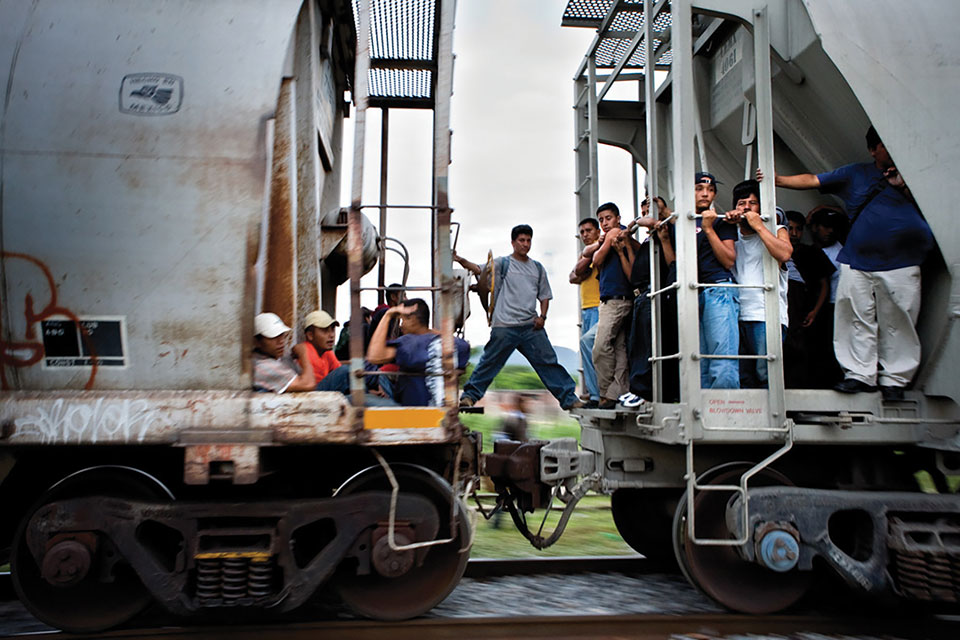 Migrants heading north through Mexico on La Bestia (“The Beast”).

Nadia Villafuerte’s collection of short stories Barcos en Houston (Ships in Houston) portrays a wide variety of voices inhabiting Mexico’s southern border, from an exotic dancer forbidden to attend a pop concert to a john, spooked by his interaction with a prostituted child. The narrator of “Cosmo Girl” (page 20) is, like many of the collection’s characters, a woman migrating from Central America to the US-Mexico border. Her shocking selfishness at the story’s climax reveals the racism, criminalization, economic hardships, and violence that migrating people face. Like most of the collection’s stories, “Cosmo Girl” takes place in the southern Mexican state of Chiapas, the author’s home state.

Villafuerte recounts how, on a family trip to the coast, she caught a glimpse of the train called La Bestia (“The Beast”). A cargo train, it is also the fatally dangerous mode of transportation for hundreds of thousands of people crossing Mexico from south to north, fleeing, seeking, gambling, hoping. Villafuerte says that the image of the train, with its stowaway human cargo hanging onto the sides of containers as best they could, inspired her to write Barcos in Houston.

The collection was published over ten years ago, yet its themes are as urgent today as then. In recent years, officials in both Mexico and the US have apprehended hundreds of thousands of migrants from the so-called Northern Triangle: Honduras, El Salvador, and Guatemala. Mexico’s US-backed Southern Border Plan for border security and migration enforcement has led to a greater share of apprehensions by Mexican officials. Central American migrants crossing Mexico’s borders—many of whom are unaccompanied children—face abuses like abduction, armed robbery, extortion, sexual violence, and trafficking. Their motivations for undertaking the risky journey are most commonly to escape gang violence, domestic abuse, or poverty in their home countries. While many migrants choose Mexico as their final destination, many others have the United States as their goal. The humanitarian crisis at the US-Mexico border can be seen in the large numbers of Central American families being held in US detention centers and the waves of unaccompanied migrant children arriving at the southwestern US border. The disparate situations portrayed in the stories reveal the complexities of the characters’ crossings.

Besides my impulse to raise awareness of the problems presented in Villafuerte’s work, I am also drawn to the wide array of voices brought to life in the collection. Their diversity paints a complex portrait of the border and its inhabitants, transitory as they may be. In my translation I attempt to preserve the rhythm of Villafuerte’s language and the natural ease of her dialogue. Because the stories are so evocative of place, translation of local slang and cultural references proves challenging. I had to treat representations of racism, for example, thoughtfully. Though discrimination finds its way into most every corner of the globe, its manifestations are often painfully specific. The unique set of insults the narrator of “Cosmo Girl” reserves for her fellow Central Americans are almost untranslatable. I had to search through glossaries of hatred to find a derogatory term for a Guatemalan person that would be recognizable, if not familiar, to an English-speaking reader. In other cases, I have left certain words in the original Spanish if they have worked their way into general usage in American English. Locos and coyotes populate the story’s bus station and remind readers that language knows no borders.

This is why I believe now is an apt time to translate Villafuerte’s rare stories of Mexico’s southern border for an English-speaking audience.

Julie Ann Ward was born in Oklahoma in 1983. She is an assistant professor of twentieth- and twenty-first-century Latin American literature at the University of Oklahoma. Ward is a 2016-17 recipient of the OU Humanities Forum Fellowship, which supports her research on representations of borders in contemporary Mexican literature.