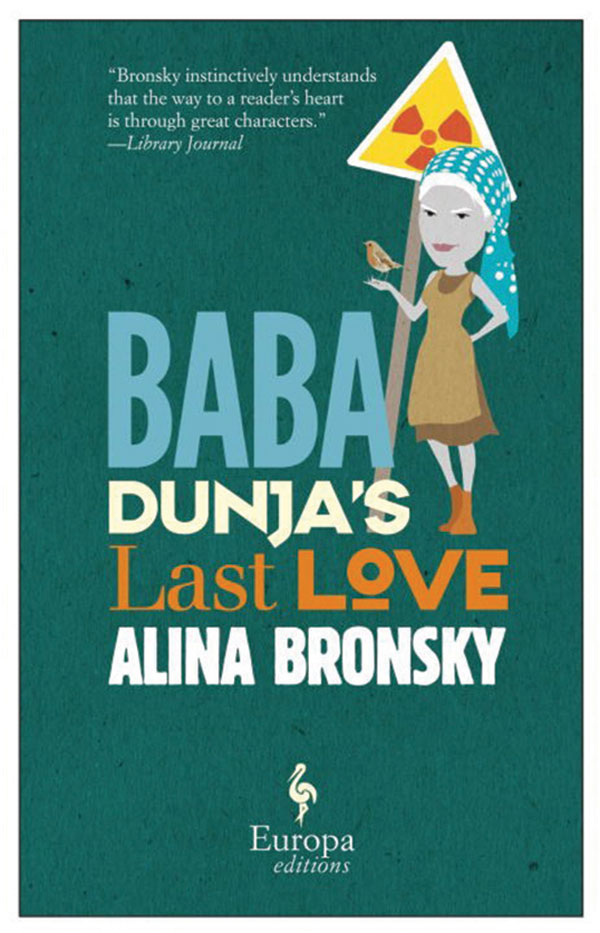 Alina Bronsky is skillful at inventing darkly humorous protagonists, and Baba Dunja is no exception. This short novel is a surprising story told by a stubborn, amusing grandmother who lives in an abandoned village that’s nestled in a post-Chernobyl “death zone.” She’s not as menacing and brash as Bronsky’s Russian matriarch Rosa from The Hottest Dishes of the Tartar Cuisine, and this makes Baba Dunja all the more compelling to unravel—she’s coolly pragmatic yet sentimental, hardened by circumstances, yet a flicker of wonder still quivers beneath her weathered outer shell.

Her world is inhabited by only a handful of neighbors and the occasional visiting biologist, and it’s intriguing to explore the village’s landscape through Baba Dunja’s eyes. Thriving on misshapen fruits and the other foods they’re able to sustain, she and the other villagers have established their own strange paradise. And they treat her as the unofficial leader of their secluded, radiation-emitting homeland.

“No one has ever insulted me like that before.”

Through her frank and quick-witted voice, Baba Dunja establishes herself as an unlikely but strangely likeable leader. And in the closest neighboring cities, it appears she has a reputation as people buzz about “Baba Dunja from the death zone.” Her character is revealed in all these encounters, and we discover even more about her as the story pivots into an unexpected, gripping path when a newcomer and his young daughter arrive with the intent of staying in their village. She takes the reins of her village’s crisis borne out of what happens to the newcomer, but in the midst of this she can’t refrain from revisiting sentimental, albeit bittersweet memories about her daughter, Irina, who now lives in Germany with her granddaughter, Laura, whom she’s never met. Bronsky’s story holds the reader in its grasp as Baba Dunja attempts to overcome an urgent situation while teetering with the unresolved strain in her family.

And along with these themes of adversity and isolation, it is a letter from her granddaughter—in a language she can’t read—that intensifies her unique estrangement. With no Internet, computers, or even books to assist her, the unconquerable language barrier that prevents her from reading Laura’s letter becomes a very real materialization of her emotional and familial barriers.

“My greatest fear is that it will disintegrate before I find out what it says.”

Through Tim Mohr’s succinct translation, Bronsky has written an enthralling story of humor, tragedy, and triumph that takes the reader deeper into Baba Dunja’s psyche, where we see how everyone has their own idea of paradise, and for some, perhaps paradise is what’s familiar and not necessarily what’s idyllic.