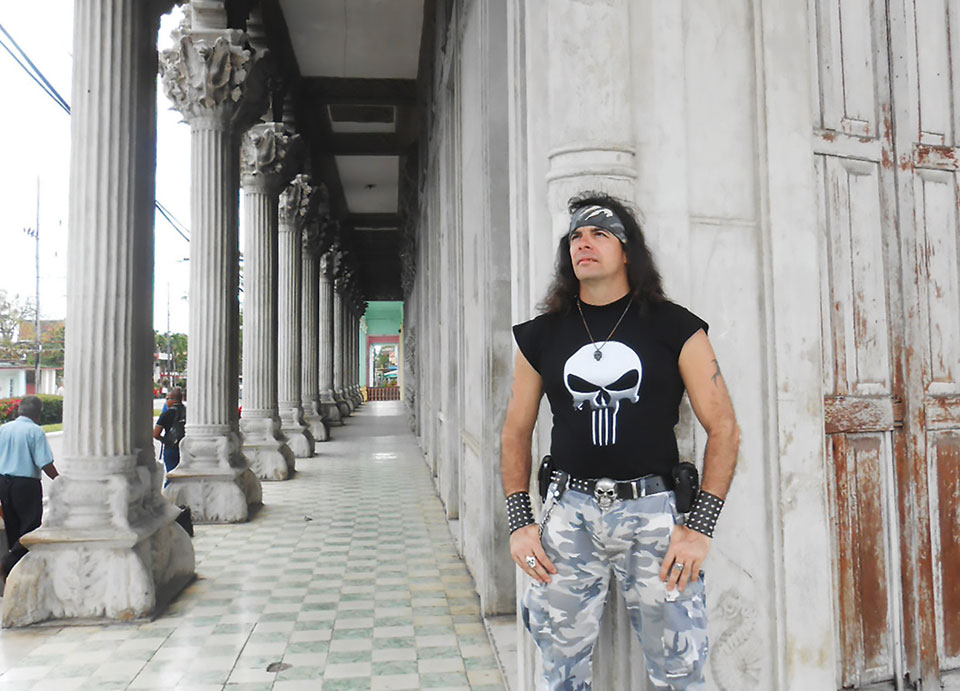 When we were together in Cuba in early 2015, I took a photo of Yoss tenderly holding a kitten we encountered in Old Havana. When I later asked him about life during Cuba’s Special Period, the time in the early 1990s following the fall of the Soviet Union, which had artificially propped up Cuba’s economy, I was surprised to hear that he had survived during the extreme food shortage of that time by catching and eating cats, which he skinned and decapitated to convince his mother they were rabbits. What could be more dystopian than having to hunt for house pets for food, in a society built on utopian ideals, and under a government that proclaimed a better future was just ahead?

Yoss and I spoke over email about Cuba’s special relationship with the concept of dystopia and its role in his work as a writer of science fiction.

David Shook: The way you’ve described the Special Period sounds to me like a real-life dystopia. Is that accurate? Did living through that time affect your writing?

Yoss: Of course, living in such difficult times affected my writing. I wouldn’t have written A Planet for Rent if I hadn’t seen so many male friends trying to illegally leave Cuba on rafts, so many female friends prostituting themselves, if I hadn’t reached the level of having to buy rice in a black bag and eating cat meat. Some writers say that reality doesn’t affect them. I’m not one of those, evidently.

Science fiction is a literature of responsibility for the future consequences of our present actions, among other definitions. So we continue depicting dystopias and begging in our minds that they never become real.

Shook: You’ve written a great number of stories set in dystopian futures. One that I particularly like is the one in progress that you told me about, in which Cuba becomes the fifty-first state of the United States. Do you think that imagining future dystopias can help us avoid them? Do you feel that you, as a writer, have any responsibility to warn your readers about the possible future consequences of present decisions, or is that beyond the scope of your duties?

Yoss: Many think that we science-fiction writers are professional pessimists: we’re always writing about asteroids that hit Earth, epidemics that kill 99 percent of the population, etc. In reality, we think that speaking about these possibilities is the best way of exorcizing them. So science fiction works like a warning: if those that can change the future read our apocalyptic stories, perhaps they’ll change it for the better. And Cuba will continue being an independent country and not even an Associated Free State like Puerto Rico. Not writing about these possibilities, which are sad and terrible but perfectly real, would be irresponsible. . . . And science fiction is a literature of responsibility for the future consequences of our present actions, among other definitions. So we continue depicting dystopias and begging in our minds that they never become real.

Shook: What dystopian futures do you think are most realistic?

Yoss: The most realistic dystopian futures are those that appear utopian. The most absurd ones. For example, before the recent presidential election, I wrote a novel, Que den un paso al frente los caídos (The fallen step forward), in which I told the story of the division of the United States into two dozen small nations, after Donald Trump’s second term. It seemed then that Trump would never be president . . . now, caray! He already is! I just hope he doesn’t dismember the country.

Shook: I’m interested in Cuba’s relationship to dystopia. Not just in regard to the Special Period but also in how the revolution was a response to a notoriously corrupt and unjust government and in how things today are changing so quickly. Could you speak to that?

Yoss: This is the most difficult question. We Cubans have been indoctrinated for decades to believe that we live in the best of all possible worlds, or at least that it was just around the corner, in that communism which we were just about to reach, if we continued down the path we were on and abided by the visions of our leaders. But that hasn’t been so. And each year it’s more evident that the public’s good faith has been betrayed in ways large and small. But the government does not accept that it hasn’t fulfilled what it promised. I think that no government can accept that and continue having the authority to govern. Perhaps that is why for years it was almost forbidden for the island’s science fiction to speak of dystopias.

Now, to speak of totalitarian regimes on distant future planets is often a metaphor to critique ours. It’s true that the previous government, Batista’s, was not the paradigm of democracy . . . but I am sure that he also presented himself as such. The present one has committed crimes and errors, too . . . far fewer, I’m sure, but neither is it innocent of everything. It’s just that, more worried about its international image, it has better hidden them . . . and it has shown the world a libertarian face of hope. Anyone who believes that hasn’t lived long enough in Cuba. It isn’t a hell . . . but, without doubt, it is pretty far from being the best of all possible worlds. A dystopia of deception, perhaps, where life isn’t so bad . . . but there’s not much notion of truth. Something that, nonetheless, still seems pretty nightmarish to me.

Translation from the Spanish
By David Shook

Two of Yoss’s science-fiction novels have been translated into English: A Planet for Rent and Super Extra Grande. Born in Havana in 1969, Yoss is also lead singer in the heavy metal band Tenaz.