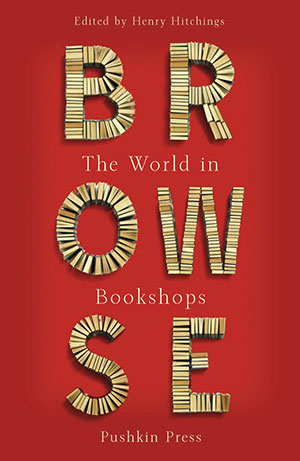 Browse: The World in Bookshops

Don’t mistake Browse for a collection of breezy tributes to writers’ favorite bookshops. The essays in this little red book are glimpses into the lives of fifteen international writers. Ali Smith opens the collection going through second-hand books in an Amnesty International shop where she volunteers. Postcards, photographs, receipts: “this seeming detritus” we leave behind in our books becomes part of the story in Smith’s hands. As the essay continues, Smith goes deeper, revealing her mother’s influence on her developing appreciation for books.

That going deeper occurs throughout, as writers witness the beginning of a revolution (Alaa Al Aswany), recount “how the bookshops of the former Soviet Union became European-style second-hand bookshops and Ukraine itself became a second-hand country” (Andrey Kurkov; trans. Amanda Love Darragh), and take refuge from an India “whose priority of economic growth and individual aggrandizement did not include, and possibly deliberately excluded, an intellectual and literary culture” (Pankaj Mishra).

Dorthe Nors ends her essay rescuing Kristin Lavrandsdatter from a box where she’d “buried it alive,” finally reading the book that a bookseller who “understood that he served as literature’s outstretched hand” placed in her grandmother’s hands decades earlier (trans. Misha Hoekstra). In other essays, booksellers are a dealer providing a fix (Saša Stanišić) and the poet Roberto Roversi, who only sold a book if he liked the customer (Stefano Benni).

A twentysomething Elif Shafak’s ferrying between shops on Istanbul’s opposite sides closes the book. With her favorite shops near Taksim Square on one side and her messier Kadikoy shops with their feminist symbols and leftist poems on the other, she kept her reading lists eclectic, choosing anything that intrigued her. Like other writers in the collection, she enjoyed the freedom to browse. Juan Gabriel Vásquez defines a good bookshop as one where you go in looking for one book and come out with one you didn’t know existed. “That’s how the literary conversation gets widened and that’s how we push the frontiers of our experience, rebelling against its limits” (trans. Anne McLean).

The book’s title becomes a commission.