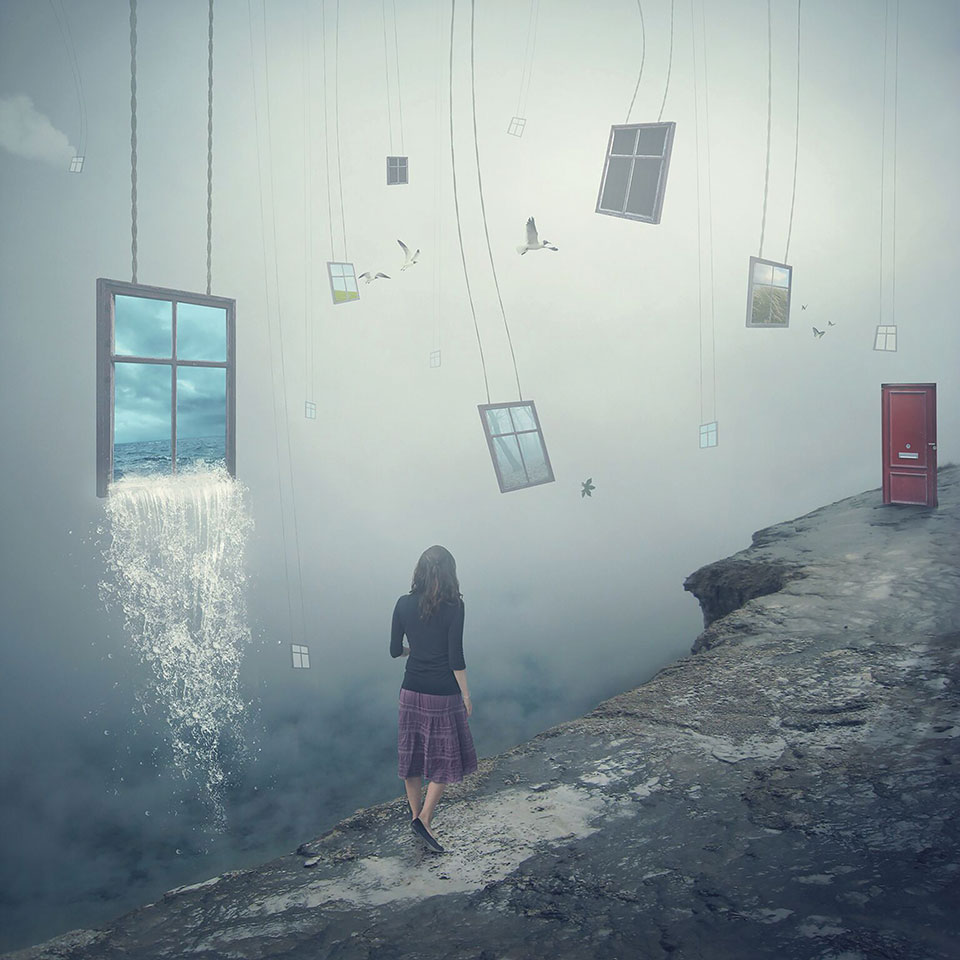 Anything might happen beyond a door opened by a perfect wife.

to the memory of María Varela Osorio

If you should meet her on the street, cross quickly to the other side and pick up your pace: she is a dangerous woman. Between forty-five and fifty years old, with a married daughter and a son who works in San Nicolás; her husband works in a body shop. She gets up very early, sweeps the walk, says goodbye to her husband, washes the clothes, does the shopping, cooks. After lunch, she watches television, she knits or sews, she irons twice a week, and at night she goes to bed late. On Saturdays she does a thorough cleaning and washes the windows and waxes the floors. On Sunday mornings she washes the clothes her son brings home, his name is Néstor Eduardo, and she fixes noodles or ravioli, and in the evening her sister-in-law comes to visit or she goes to her daughter’s house. She hasn’t been to the movies in a long time, but she reads Radiolandia and the police blotter in the newspaper. She has dark eyes and rough hands and she is starting to go gray. She catches cold often and keeps a photograph album in a bureau drawer along with a black crepe dress with lace collar and sleeves.

Her mother never beat her. But when she was six, her mother gave her a whipping one day for drawing on a door with colored chalk and she made her erase the drawing with a damp rag. While she was cleaning, she thought about doors, about all of the doors, and decided they were very stupid things because they always opened to the same places. And the one she was cleaning was the absolute stupidest of all, because it led to her parents’ bedroom. And she opened the door and then it didn’t lead to her parents’ bedroom but rather to the Gobi desert. It didn’t surprise her, although she didn’t know what the Gobi desert was and they hadn’t yet even taught her in school where Mongolia was, and neither she nor her mother nor her grandmother had ever heard tell of Nanshan or Khangai Nuruu.

She took a few steps on the other side of the door and bent down and scratched the yellowish ground, and she saw that there was nothing and no one around and the hot wind messed up her hair, so she went back through the open door, closed it, and went on cleaning. And when she finished, her mother scolded her a little more and told her to wash the rag and get the push broom to sweep up that sand and clean off her shoes. That day she changed her hasty opinion about doors, although not entirely, at least not until she saw what would happen.

What kept happening over the whole course of her life, right up until today, was that from time to time, doors would behave in a satisfactory manner, although in general they went on being stupid and opening onto dining rooms, kitchens, laundry rooms, bedrooms—at best, offices. But two months after the desert, for example, the door that always led to the bathroom opened onto the workshop of a bearded man who had on a long robe, pointed shoes, and a cap that fell to one side of his head. The old man had his back to her and was taking something out of a tall piece of furniture with many little drawers behind a very large, very strange wooden machine with a flywheel and a gigantic screw. There was a cold draft and a sharp scent, and when he turned around and saw her, he started to shout at her in a language she didn’t understand. She stuck out her tongue at him, went out the door, closed it, opened it again, and went into the bathroom and washed her hands for dinner.

Another time, nap time, many years later, she opened her bedroom door and went out onto a battlefield and wet her hands in the blood of the wounded and the dead and tore from the neck of a dead body a cross that she wore as a pendant for a long time under buttoned-up blouses or high-necked dresses and that she now keeps in a tin can under her nightshirts along with a brooch, a pair of rings, and a broken wristwatch that had belonged to her mother-in-law. And so without trying, by luck, she found herself in three monasteries, in seven libraries, on the world’s highest mountains, in she no longer knows how many theaters, in cathedrals, in jungles, in meat-packing plants, in sewers and universities and brothels, in forests and tents, in submarines and hotels and trenches, on islands and in factories, in palaces and in huts and in towers and in hell.

She hasn’t kept track nor does it matter to her: any door can lead to any place, and that fact has the same weight as the thickness of the dough for ravioli, as the death of her mother, and as the forks in the road of life that she sees on television and reads about in Radiolandia.

Not long ago, she accompanied her daughter to the doctor’s office, and when she looked at the door of the bathroom in the clinic hallway, she smiled. She wasn’t sure, because she can never be sure, but she got up and went to the bathroom. And yet it was a bathroom: at least, there was a naked man in a bathtub full of water. Everything was very big, with very high ceilings and a marble floor and closed drapes at the windows. The man seemed to be asleep in his white tub, short and deep, and she saw a straight razor on an iron claw-foot table that had feet decorated with iron leaves and flowers above the lion’s paws; a razor, a mirror, some curling tongs, towels, a box of talc, and a basin of water, and she tiptoed closer, lifted the razor, tiptoed over to the man asleep in the tub, and slit his throat. She threw the razor to the ground and rinsed her hands in the warm water of the tub. She turned around when she went out into the clinic hallway and caught sight of a girl going in through the bathroom’s other door. Her daughter looked at her.

She threw the razor to the ground and rinsed her hands in the warm water of the tub.

“The toilet didn’t work,” she answered.

Only a few days later, she slit the throat of another man at night in a blue tent. That man and a woman were sleeping, barely covered with the blankets of a very large, very low bed, and the wind strained the tent and bent the flames in the oil lamps. Further on there would be an encampment, soldiers, animals, sweat; manure, weapons, and commands. But there inside, there was a sword among the clothing of leather and metal. She cut off the head of the bearded man with it and the sleeping woman moved and opened her eyes as she went through the door and returned to the patio she had just finished washing down.

On Mondays and Thursdays, when she irons shirt collars in the afternoon, she thinks about the slit throats and the blood and she waits. If it is summer, after putting the clothes away she goes out to walk for a bit until her husband gets home. If it is winter, she sits in the kitchen and knits. But she doesn’t always encounter sleeping men or open-eyed cadavers. On a rainy morning, when she was twenty years old, she was in a prison and mocked the prisoners in chains; one night when the kids were little and everyone in the house was asleep, she saw a disheveled woman on a plaza, looking at a revolver without daring to take it out of her open purse; she walked over to her, she put the revolver in her hand, and she stayed until a car parked on the corner, until the woman saw the man in gray who got out and looked for the keys in his pocket, until the woman aimed and shot; and another night, while she was doing the sixth-grade geography homework, she went to get colored pencils from her room and she was beside a man crying on a balcony. The balcony was so high, so high above the street, she was tempted to push him so as to hear the bump down there below, but she remembered the orographic map of South America. She was on the point of going back, but since the man hadn’t seen her, she pushed him and then ran out to color in the map, so she didn’t hear the bump, but she did hear his cry. And on an empty stage she made a bonfire under the velvet curtains, and during a riot she raised the cover of a cellar, and in a house, sitting on the floor of a study, she destroyed a two-thousand-page manuscript, and in a clearing in a forest, she buried the weapons of the men who slept, and in a river, she opened the sluice gates of a dam.

The daughter is named Laura Inés, and the son has a girlfriend in San Nicolás and has promised to bring her next Sunday so she and her husband can meet her. She has to remember to ask her sister-in-law for the recipe for orange cake, and on Friday they’re showing the first chapter of a new telenovela. She passes the iron over the front of the shirt once again and remembers the other side of the doors that are always carefully closed in her house, that other side where the things that happen are far less abhorrent than those that are experienced on this side, as you will understand.

Translation from the Spanish by Amalia Gladhart Angélica Gorodischer (b. 1928, Buenos Aires) has lived most of her life in Rosario, Argentina. The recipient of numerous awards, she is the author of some thirty books. Three of her novels have appeared in English: Kalpa Imperial, translated by Ursula K. Le Guin (2003); Trafalgar, translated by Amalia Gladhart (2013); and Prodigies, translated by Sue Burke (2015). 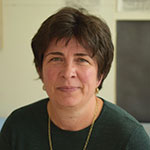 Amalia Gladhart is the translator of Trafalgar (2013), by Angélica Gorodischer, and of two novels by Alicia Yánez Cossío. Her short fiction has appeared in Saranac Review, The Fantasist, Atticus Review, and elsewhere. Recipient of an NEA Translation Fellowship, she is Professor of Spanish at the University of Oregon.