Now settled in Hong Kong, one of China’s most influential contemporary writers considers the city’s cultural positioning and how to improve its cultural ecology. When a canyon separates rich from poor in a city with a higher Gini coefficient than any other developed region in the world, what does it mean to dwell poetically?

AT THE END OF THE 1930s, the renowned newspaperman Sa Kongliao said, “At some point, the center of Chinese culture will be in Hong Kong.”

In the two and a half years since I settled in Hong Kong, I haven’t stopped searching for Hong Kong’s cultural positioning, as it is an important frame of reference for me. Recently I was shocked by Chan Koonchung’s “Cultural History of Hong Kong Society in Ninety Minutes,” collected in his book The Next Ten Years: Hong Kong’s Glory Years? (2012): not only did Chan clearly and thoroughly lay out the source and course of culture in Hong Kong society over the last half century, but the undulations and vacillations of Hong Kong culture are themselves so stirring. Reading it, I became ashamed of my own ignorance.

There have been a few flourishings of literature and culture in Hong Kong, flowers that have bloomed and then fallen from the branches, but Sa Kongliao’s wishful prediction has not come true. In fact, Hong Kong seems ever further from arriving at such a goal, as we are face-to-face with a more brutal reality: in Hong Kong, money is God, and blood pressure rises and lowers with the stock market, the moon waxes and wanes to prices of real estate; in Hong Kong, so as to reap the highest yield on their souls, the world’s richest capitalists meticulously manipulate sticker prices in supermarkets so they’ll be different on weekends from weekdays; in Hong Kong, a canyon separates rich from poor, and the city has a higher Gini coefficient than any other developed region in the world, yet no one fears upheaval from the impoverished; in Hong Kong, beneath the slick surface of equality is an entrenched class system, with the bottom of the pyramid made up of migrants, the unemployed, and foreign domestic workers.

In Hong Kong, beneath the slick surface of equality is an entrenched class system, with the bottom of the pyramid made up of migrants, the unemployed, and foreign domestic workers.

Because I teach, I have a lot of contact with the youth of Hong Kong. And I worry for their generation. They were born on a production assembly line—their whole lives are determined for them in advance. This assembly line has the look of being safe and reliable, but their creativity and imagination have been hijacked—by capital, by their fathers, by the media, by the internet; they have no curiosity, no vision, no desire to read or to learn, no independence, no ability to express themselves, yes, none whatsoever. I have no doubt that this is a contributing factor to the high suicide rate of youths in Hong Kong, a contributing factor to the pervasiveness of psychological complexes among the youth of Hong Kong.

But what troubles me most is that if the youth are Hong Kong’s present, then their lack of creativity or imagination leaves the city with no hope for the future, no matter how economically prosperous it may be. For their sake, then, the responsibility of every writer and intellectual living in Hong Kong must be to improve the sad state of this city’s cultural ecology. What we must figure out is how to help them open up a space for the spirit, a space for the poetic, a space for the creative and imaginary.

Well, what is the poetic anyway? To “dwell poetically” has by now become the kind of language used by property developers to sell real estate, mixed in with clichés about European-style luxury. But I think it’s worth going back to the locus classicus and asking what twentieth-century German philosopher Martin Heidegger was really getting at when he wrote about it.

“. . . poetically man dwells . . .” If need be, we can imagine that poets do on occasion dwell poetically. But how is “man”—and this means every man and all the time—supposed to dwell poetically? Does not all dwelling remain incompatible with the poetic? Our dwelling is harassed by the housing shortage. Even if that were not so, our dwelling today is harassed by work, made insecure by the hunt for gain and success, bewitched by the entertainment and recreation industry.

It speaks of man’s dwelling. It does not describe today’s dwelling conditions. Above all, it does not assert that to dwell means to occupy a house, a dwelling place. Nor does it say that the poetic exhausts itself in an unreal play of poetic imagination. . . . This is not all. Perhaps one even bears the other in such a way that dwelling rests on the poetic. If this is indeed what we suppose, then we are required to think of dwelling and poetry in terms of their essential nature. If we do not balk at this demand, we think of what is usually called the existence of man in terms of dwelling.

Toward the end, he concludes:

That we dwell unpoetically, and in what way, we can in any case learn only if we know the poetic. Whether, and when, we may come to a turning point in our unpoetic dwelling is something we may expect to happen only if we remain heedful of the poetic. How and to what extent our doings can share in this turn we alone can prove, if we take the poetic seriously.

In short, to dwell is the state of being of the human, while the poetic is the attainment via poetry of a spiritual liberation or freedom; therefore, to dwell poetically is to search for one’s spiritual home. Starting from this inference of Heidegger’s, we can’t help but ask, How do we dwell poetically in Hong Kong?

To dwell is the state of being of the human, while the poetic is the attainment via poetry of a spiritual liberation or freedom; therefore, to dwell poetically is to search for one’s spiritual home.

Hong Kong’s many advantages over the mainland, over nearly all the cities in the entire greater China region, are worth celebrating: the high degree of administrative independence; the basically flawless rule of law; and the freedoms of speech and of the press. Additionally, Hong Kong fulfills the basic conditions necessary for being an international cultural capital. Which basic conditions? For one, dominant international languages—at the moment that’s English, but right beside that there’s Chinese, which may take its place; two, many ethnicities and many languages and many cultures coexisting and mixing together; three, a long history, with an abundance of resources provided by tradition; four, its international standing in economics and finance; and five, it is a center of higher education.

To dwell poetically in Hong Kong is not a hypothesis but rather a path leading to reality.

At the end of November 2009, with support from the Chinese University of Hong Kong, we launched the first of the International Poetry Nights in Hong Kong, “The Other Voice.” Seven renowned poets from around the world and over a dozen Chinese-language poets from the mainland, Hong Kong, and Taiwan came for a festival that attracted over two thousand audience members. The opening ceremony was live-streamed on the internet, all readings were accompanied by translations in English and/or Chinese projected overhead, and, along with musical interludes and visual design, constituted a transmedial experience of sound, sight, and language. “Cantonese Poetry Night” emphasized the role of regional speech amidst the international, and two roundtable discussions, on “The Other Voice” and “Poetry and Translation,” gave participating poets a chance to dialogue with one another. Events at the Diocesan Boys’ School brought poetry into the secondary education system, and a multilingual anthology of poems from the event, titled The Other Voice, was published by the Chinese University Press. It was the largest-scale poetry festival in the history of Hong Kong to date, and we decided to make it a biannual event.

Of course, such grand-scale festivals are insufficient to enable us all to “dwell poetically”; what is needed is for poetry to become part of the daily formation of this city’s spiritual life. With support from the Lee Hysan Foundation, we have also been able to invite two international poets to Hong Kong each year, for two-week stays. As part of these visits, we prepare a bilingual volume of the poet’s work to appear in Chinese translation from Oxford University Press, and we arrange as well for the poets to give a series of talks and workshops to Hong Kong audiences. During their time in Hong Kong, the poets take part in an array of poetry-related activities, including readings, discussion sessions, and forums with high school and university students. So far, we have hosted Shuntarō Tanikawa from Japan and Michael Palmer from the United States. I believe that the diversity of activities we arrange for these poets can supplement the International Poetry Nights, and together they can add texture to the flat monotony of our lives.

At this point, people may categorize me as a “Southbound Writer,” like those who came to Hong Kong from mainland China in the late 1940s—even though I have a lousy sense of direction and don’t know what it means to be “southbound.” But I know the list of Southbound Writers is a long one and includes the names of many of the greatest literary figures in modern Chinese literary history. Hong Kong was for them a crossing, a haven, or even a final destination, providing not only a place to stay but also a place to write, and they gave back to Hong Kong through their writings and their literary activities. After twenty years in exile abroad, fate brought me to Hong Kong, where I have settled, where I have made my home. As I said above, at the same time as I have been looking for my own positioning, I have been searching for the cultural positioning of this city. I hope that, both through my writing and through the activities and events I have helped organize, I too can give back to this place called Hong Kong, as it has taken in yet another rootless drifter looking to put down roots.

Translator’s note: Bei Dao wrote “Dwelling Poetically in Hong Kong” in 2010, two and a half years after moving to Hong Kong and not long after what would be the first of the International Poetry Nights in Hong Kong—a poetry festival that has helped change the cultural reputation of this city. At one point Bei Dao strikes a sour note about the youth of Hong Kong, whom he knew as his students. Much has changed in Hong Kong since he wrote this piece—the activation of the younger generation’s political engagement with Occupy Central (2014), or what was known as the Umbrella Movement, but also Bei Dao’s International Poetry Nights, which have taken place biennially since 2009. If his critique of students now rings false, then, to a certain extent, Bei Dao himself is partially to thank for that. – Lucas Klein 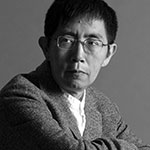 Bei Dao, one of China’s foremost modern poets, co-founded China’s first underground literary journal in 1978 and was exiled following the 1989 Tiananmen Square protests (WLT, Nov. 2008). His memoirs were published as City Gate, Open Up (2017). He has lived in Hong Kong since 2007. 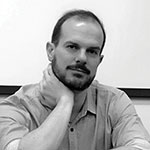 Lucas Klein is a father, writer, and translator as well as assistant professor in the School of Chinese at the University of Hong Kong.