To Write from a Place of Permanent Exile

Only travel can teach us anything. Only travel can move us out of our staid lives into a fresh perspective, to see before us what has not been before us. It is travel that moves us and allows us to see others in their lives, how they live as well as how we live.

It’s no wonder my life was changed by reading Art as Technique, by Viktor Shklovsky, who woke me to the deadening of habitualisation: “. . . as perception becomes habitual, it becomes automatic. And so life is reckoned as nothing. Habitualization devours works, clothes, furniture, one’s wife, and the fear of war. If the whole complex lives of many people go on unconsciously, then such lives are as if they had never been.”

As a child, I had been forced to travel—by birth, by circumstance, by world event. Bilingual (formerly multilingual), from the island of Patmos, Greece, I was born on an American Air Force base in England, was raised in Greece, England, Wales, Turkey, Belgium, Switzerland, Austria, Germany, Yugoslavia, Jerusalem, lived in a tent on an Italian beach and was then evacuated out of Italy, and viewed my childhood as a succession of insecurities I hoped my adulthood would make stable.

When I was thirteen, Greece’s political coup of the military generals overthrew the royal government, forcing families to either be assimilated, purged, or escape into exile if they had an “out.” Thus, America (because of my birth status on that American military base) and my next succession of living in thirteen American states (not the original ones). I became the child other children made fun of, because of my accent. I was “that kid who wasn’t here last year.” I stood in the background, at the edge of all the class photos. I became “that kid who used to be there last year.” Eventually, I lost my French and German, the other briefer languages and phrases, retained the Greek, hid the accents, kept the British spelling, and became a writer who writes from a place of permanent exile.

I became the child other children made fun of, because of my accent. I was “that kid who wasn’t here last year.” I stood in the background, at the edge of all the class photos.

Still, a writer has to write in the world. I chose to write for the world, in spite of the world, wanting to stay in contact with the people, the land, the cultures, even if in only memory. It was about redemption. Teenaged years brought me to adoption and that furtive stability I prayed for. But the nature of writing (specialising in poetry) kept me forever in the status of the outsider, the observer held at a distance. Everywhere I went, I was socially viewed and marked by subliminal difference. “Where are you from?” is the worst question anyone could ever have asked me as a child. Perhaps all this is why I now most identify with issues of identities and citizenship, with refugees and exiles, the same others who only strive to also find their places in this world, who only wish to live beyond politics and the manmade constructions of borders.

I chose to write for the world, in spite of the world, wanting to stay in contact with the people, the land, the cultures, even if in only memory. It was about redemption.

As a young adult, I moved back to Greece and lived on Patmos again, in Thessaloniki, in southern Turkey. Back in America, my job after college at Columbia was with the old airline, TWA, where I found myself on pairings all over Europe, Egypt, the Middle East. Because my father now is a Greek Orthodox priest, I became adept at smuggling medicines past border control and customs inspections into Greece for sick people, for sick monastics in remote monasteries. It was about helping people and subverting both politics and import laws. I had become proficient at adapting to any nuance of local culture, custom, or flavour, quickly blending in, whichever the country.

But the wars kept coming—Afghanistan, the Gulf, Libya, Egypt, Syria—on our televisions, the flood-lines of human bodies walking to borders, clamouring to get in, to escape and live. The juggling of governments accepting and refusing to accept the refugees and exiles.

My adoptive mother’s family had survived early-century pogroms in Alatsata, Turkey, escaping to the Greek island of Chios and, then, to America. And now, how circuitously had current circumstances given me several opportunities to return to Bavaria, to Turkey and Greece. In 2016, at the height of the Syrian refugee marches to European countries, I found myself back there, witnessing the reality of humans facing the same old evacuations and constant, unstable moving I knew well.

What I’ve always hated is how “trendy” wars can be. After the fever of media reportage, what happens to the exiles and refugees when the frenzy of cameras has moved on to the next “trendy” global trauma? Why does nobody stay and follow the stories of the people a year after? What happens after the “popularity” of the story dwindles?

There is such an odd sense of a “double-exposure” photograph in countries of exile: one exposure is of normality, the tourist scenes of a village or city; the other exposure is “visibly hidden,” almost like a transparent overlay, glimpsed more when you stay with people who are trying to help the “citizens of nowhere.” In Bavaria and the picturesque Alps, children begged in the streets, in restaurants. In Smyrna, I felt overwhelmed by the multitudes of begging. In Alatsata, I found old people who knew my family’s name, but I also found people asking me to help translate languages and help them navigate passage to Greece. By the time I got to Chios, one of the first seaports for war refugees, a number of the Greek islands were already overrun with refugees seeking any place to sit, to sleep, to breathe. Through an old schoolmate, Jim Antokas, I got to meet his cousins, Markos and Kalliope Psoras of Chios, whose charity work for the wave of refugees on that island was both humbling and revealing: they were rehabbing and repurposing abandoned monasteries on their island, making use of the ruins by cleaning, scrubbing, and filling the rooms and cells with donations, reopening the chapels. Driven high into the arid mountains of Chios Island, I was brought to one, particular, ancient, ruined monastery of stone and brick—reclaimed, rebuilt, cleaned—a vibrancy of new flowers, splashes of purple and orange petals against grey stone, all its prayers recast.

Driven high into the arid mountains of Chios island, I was brought to one, particular, ancient, ruined monastery of stone and brick—reclaimed, rebuilt, cleaned—a vibrancy of new flowers, splashes of purple and orange petals against grey stone, all its prayers recast.

On top of the mountain fragranced by pine and distance, the height of green cypress, the dizzying blue port of entry leagues below, Markos and Kalliope led me into rooms housing the silence of charity: a room of shoes standing at attention, an alcove of hung shirts with sleeves outreaching, rooms of coats, even a room of wedding dresses—I was stunned by that vision of whiteness and lace—histories of donated clothing to be of use again, waiting for bodies to fill them.

Yes, there were news stories of drowned refugee children and the sombre pictures—on this island and neighbouring islands. We were helpless helpers there, only able to listen to their griefs and sympathise. I focused on the people who were actively helping other people, strangers, those in exile from their lives and homes. I translated what I could translate. I absorbed what I could absorb. I allowed myself to be changed out of the habit of my grown living. I knew that, in America, we suffer from the burden of comfort. I saw it helped me to travel however far to share the reality behind the news, to remember my childhood and offer anything back. Every one of us has known levels of insecurity—and how such can linger.

Yes, for a while, select Greek island citizens who were helping refugees were nominated for the Nobel Peace Prize, and didn’t win. But those in exile still remain where they landed, halfway in and out of their lives. The makeshift camps are still there, the need is still there, and the various wars are still destroying.

In the time since my time there, just two years ago, there’s hardly any further news in the American media about the refugees and exiles. But my own exile has followed me my whole life. I still live it. I still write about it, my healthiest therapy. I chose to stay conscious and not habituated by living. I travel back when able. In like manner, the people I met and shared with will continue to live their realities, their identities, bandaged and blended. As my own life became repurposed, all I can do is honour them and remember them, helpers and helpless alike, to remain conscious of all their lives, hoping they may become as repurposed as those good monasteries made contemporary and helpful. May they continue so, beyond the media, beyond habit and invisibility. 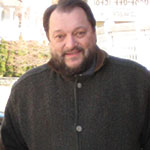 Nicholas Samaras is the author of Hands of the Saddlemaker and American Psalm, World Psalm. He is currently completing a manuscript of poetry focusing on experiences of exiles and refugees, “Citizens of Transience.” His most recent poem for WLT is “Exile Dossier” (January 2019).