AS THE YEARS GO BY and I get more advanced in age, I find I have become increasingly self-aware. It’s hardly an astonishing revelation, of course, but my sense of self-awareness is greater than the self and extends to my home city—Hong Kong. Or, to some extent, the self has been subsumed or even replaced by the city—the two are one. Roland Barthes in A Lover’s Discourse writes, “The lover’s fatal identity is precisely this: I am the one who waits.” My identity, not fatal but at once practical and emotional, is this: I am where I live. This is a sentiment perhaps shared by many in this turbulent world who swear allegiance to their cities and vow to defend them at all times, at any cost. And it is a sentiment inherent in the longing for their home cities by those who have been deprived of the right to live there.

These days, both in my creative works and academic research, I write more about Hong Kong. It is as if writing can have concrete effects in the real world, and I hope that at least some of the time it can. I ask questions such as Can we say Hong Kong? How is Hong Kong represented in film? What is the local Hong Kong ethos and how is it articulated? How many Hong Kongs are there? Do they speak to one another; do they try to decipher one another?

With self-awareness comes constant wondering what other people think about you. Pride and insecurity are wont to go hand in hand. And I also wonder about how Hong Kong is perceived by those who do not live here or those who imagine it in passing. We can see ourselves, or so we think, but how are we seen? People might marvel at Hong Kong’s magnificent skyline, a labyrinthine cityscape wrought out of a built environment that is one of the world’s densest. These are all very visual and have been repeatedly captured and reproduced, with varying degrees of success and fidelity, by filmmakers and photographers, even if some of them, lacking any genuine emotional attachment, merely use the city as a picturesque backdrop. Others might consider Hong Kong with detached and in some cases authentic pity, half-understanding what has happened to it and what might yet be in store for the city. Since the city’s sovereignty was “turned over” from Britain to China in 1997, it has experienced much: two financial crises, the SARS outbreak, a growing discontent in civic society, the Umbrella Movement of 2014, the abduction of the Causeway Bay booksellers two years later, and the unmistakable deterioration of the city’s democracy.

I also wonder about how Hong Kong is perceived by those who do not live here or those who imagine it in passing. We can see ourselves, or so we think, but how are we seen?

Writing during the lead-up to the hand-over, the scholar Ackbar Abbas suggested interpreting Hong Kong culture through the lens of “a culture of disappearance.” He wrote, “The change in status of culture in Hong Kong can be described as follows: from reverse hallucination, which sees only desert, to a culture of disappearance, whose appearance is posited on the imminence of its disappearance.” As we approach 2047, which will see the end of the “One Country, Two Systems” policy that guarantees fifty years without changes to the city’s legal system and fundamental rights as it integrates into the People’s Republic of China, it can be said that the idea of “disappearance” has become once again highly prescient to the narration of Hong Kong. The city will be absorbed—“disappeared”—into China, more fully than ever, and the status of the city as a self-autonomous Special Administrative Region will vanish.

BUT HONG KONG is not defined by its topography and social strife alone. And amid the disappearances, deletions, demolitions, vanishing, and forgetting the city is subject to, there are certain areas of life that remain constant. In the following pages, I turn the focus to two of those constants as they are experienced in the quotidian lives of Hongkongers—food and language—and which are unlikely to go anywhere anytime soon, for all the changes each might undergo.

Hong Kong’s food culture encompasses much more than just the stuff of sustenance but also informs fields as varied as class, community, gender norms, labour relations, government policies, civic identity, attitudes to life, and more. In one of the world’s most expensive cities, restaurants are one of the few things that remain consistently affordable to even the poorest people. The city’s estimated twenty-four thousand restaurants and cafés are a taxonomy in themselves, a complete survey of which is beyond the scope and space allotted to the present article. A few merit mention, though. We have cha chaan tengs—literally translated as “tea restaurants”—which are Hong Kong–style cafés found in all parts of the city. These are as much places Hongkongers go to meet others as to eat. There are dai pai dongs, open-air food stalls, where meals are consumed in surroundings that might best be described as basic—their numbers are sadly dwindling due to the government’s hostile antihawker legislation and refusal to grant new licenses in the name of safety and hygiene. Food is the nexus of family and community and dim sum and poon choi—two of the more popular exemplars of communal dining—are often witness to both the genial conviviality and dark intrigues of family life.

Food, like many another thing, is political too. Hong Kong’s biggest riot of recent years—humorously dubbed the Fishball Revolution—took place in February 2016 when activists rose up against a police crackdown on illegal street food vendors during the Lunar New Year, a time when hawkers usually come out to sell street food (including the ubiquitous fishballs, as emblematic a Hong Kong foodstuff as there could be) until early morning.

The city’s love affair with food is not without its guilt-inducing side, though. For many years, Hong Kong has been one of the biggest shark fin trading centres. More people are now aware of the cruelty and waste of shark finning, which involves the removal of fins from sharks, often when the shark is still alive. Though more and more restaurants and consumers are turning away from shark fin soup, and many of the shipping companies serving Hong Kong’s port refuse to carry shark fin, it has not been completely done away with. Food is also one of the vectors of Hong Kong’s waste problem, one of the world’s worst. The South China Morning Post reported last year that every day Hongkongers throw away 450 tonnes of leftover soup ingredients. Nothing to be proud of. I say this much as I love the soups made by my father—lotus root soup with lean pork ribs, Chinese watercress soup, chicken feet soup, carrot and daikon radish soup, winter melon with barley soup . . .

Cantonese suffers from increasing marginalisation in favour of Mandarin, the “official” language spoken in mainland China—one of many encroachments from across the border that affect Hongkongers’ way of life, style of life, and their identity.

Hong Kong remains an officially bilingual city, and English still continues to have a significant role after 1997. For most people, though, its use is confined to business, trade, and education rather than daily exchanges. The majority of the population in Hong Kong—over 85 percent—speak Cantonese as a first language. Even though the city, as the linguist Lisa Lim writes, “hosts myriad communities, each with its own heritage languages,” it is Cantonese that most of the city’s people consider to be their mother tongue. A constantly evolving language, Cantonese is these days unfortunately being stifled and sidelined institutionally in Hong Kong, and there is even a sense that it is endangered. It is even being squeezed out in Hong Kong classrooms, suffering from increasing marginalisation in favour of Mandarin, the “official” language spoken in mainland China—one of many encroachments from across the border that affect Hongkongers’ way of life, style of life, and their identity. One feels acutely what Barthes wrote: “Language is a skin: I rub my language against the other.”

THE PIECES IN THIS FEATURE centre on either food or language or both, written by a mix of locally born writers, expats who call Hong Kong their home, and Hongkongers currently living, studying, or working abroad. Xi Xi writes about turning the bones of a black silk chicken, a gift from a friend, into writing implements, dipping them in ink. Kit Fan reminds us that in this city, “millions of homemade voices [are] in an impasse, / in fissures, in boxlike existences / where one language is never enough.” Bei Dao asks: “How do we dwell poetically in Hong Kong?”

The pieces in this feature centre on either food or language or both, written by a mix of locally born writers, expats who call Hong Kong their home, and Hongkongers currently living, studying, or working abroad.

Wawa’s poems evoke the language of nature, of dream, of birth, of the theatre of time, beckoning us to listen. Arthur Leung takes us to a crowded dim sum house where the servers’ carts ferrying bamboo baskets to tables are compared to “wooden horses, galloping giraffes, flying tigers.” Belle Ling recounts a tale of food, life cycles, and filial piety: “Will she be a sow in her next life / for she ate too much pork belly?”

Both Kate Rogers and Eddie Tay, originally from Canada and Singapore, respectively, write about their relationship with Cantonese. Jennifer Wong remembers “King of Kowloon,” a “self-declared king for fifty years, painting / all over the colony” with his distinctive handwriting—words of defiance.

My favourite of all are these lines from Chris Song’s “Rice with Soy Sauce”: “a bowl / of rice with soy sauce—a taste of closeness from home at home.” They reminded me of my late paternal grandmother who, to save money, would give us the plainest of dishes for lunch sometimes—a bowl of rice with soy sauce, which, from the distance of memory, was the most delicious ever, because it was prepared by her. The feature also includes Xu Xi’s list of must-read books for those who want to learn more about Hong Kong. I hope these pieces together will inspire love for my city in international readers and make it a spirited topic of their table talks. 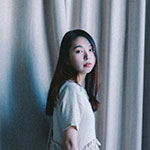 Yang (yangillustration.com) is currently based in Macau, working and learning to be a good visual storyteller. Her family members include two cats, and she almost naps every day. A slow reader who daydreams a lot, Yang is also interested in growing little plants. 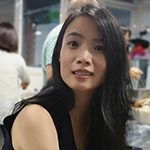