“We All Have to Eat”: A Conversation with Poet Clemonce Heard

I had the privilege of having a conversation with the poet Clemonce Heard while he was enjoying a piece of orange-peel chocolate. My first impression of him was his stoic appearance and soft-spoken manner. Growing up in New Orleans influenced his passion for music and food. His most notable poetry pieces display his love for food and how it can mold the soul. Working for years as a cook, he uses his creative mind not only to create delicious foods for his family and friends but also to convey emotional attachments through his poetry.

Tiffanie Vo: I read one of your poems called “Midwest Swing,” and I absolutely loved it. Was it referencing your recent move to Oklahoma? What was your mind-set during that time?

Clemonce Heard: Yeah, thank you for looking at that. I had just moved to Tulsa, and me and a few friends would attend Tuesday open mics at the Jazz Hall of Fame. There is two hours devoted to jazz and two hours devoted to blues. There were these swing dancers that were flashy. I started thinking about the rhythm.

Clemonce: Thank you, I was picking up on things and learning. But it’s actually a song. It’s a poem, but I sing it. I’m not going to sing it right now. But if I was performing the poem, I would sing it because it was written as a song in terms of meter.

Tiffanie: That makes a lot more sense now. I admit I reread the poem a few times to get the right rhythm when I was reading it in my head. Do you play any instruments?

Clemonce: No, but I love music! It is one of my favorites of all the arts, and I wish it was one thing I could do. I played one instrument, the double-bass, in high school for a year, so it almost doesn’t count. When I meet someone that can play music, I am always amazed because I believe, as Fela Kuti once stated, “Music is the king of all professions.”

Tiffanie: I love music too. I played the piano for eight years growing up, but I was a terrible piano student. I was classically trained, but I dreaded my piano lessons. Anyways, music is still a big part of my life even though I don’t play the piano anymore. If you could pick an instrument, what would you want to learn how to play?

Tiffanie: I heard the trumpet was one of the hardest instruments to play. That would be super impressive. Besides a future music career, do you have any favorite poets or writers that influenced you?

Clemonce: Oh, I have many.

Tiffanie: What are the first names that come to your mind?

Clemonce: I would say Patricia Smith. She is from Chicago. She was one of the first poets whose work I latched onto. Now, she’s a really good friend. Next would be Yusef Komunyakaa who is also from Louisiana. From a small town named Bogalusa. Other people are Terrance Hayes, Tiana Clark, Claire Venetia, Clare Paniccia, Colin Pope, Allyse McCanna, Kelila Knight. This is just a few poets pushing boundaries.

Tiffanie: I will definitely add them to my list of must-read poets.

Clemonce: I have been so fortunate to meet them all. One in particular is Tiana Clark, who is like a sister. Her poetry is outstanding. There’s a sort of grit that I like in a lot of my poetry, and in hers she writes with grit but also grace. It’s amazing.

Tiffanie: She sounds amazing. Wait, so you mentioned Patricia Smith. I heard you cooked for her and in another lifetime you were a chef. Is this true?

So, I invited Patricia Smith over and I cooked because that’s what you do for your friends and family.

Clemonce: Who told you! I’m not fessing up to anything. But I will say I did cook for Patricia when she came down for the Nimrod. I knew she was coming, and we had been friends for a couple years. So, I invited her over and I cooked, because that’s what you do for your friends and family.

Tiffanie: That’s so nice of you. So, you were a chef?

Clemonce: Not a chef, I was a cook. I cooked for seven years. I first started cooking at a gas station, then fast-food restaurants, and eventually fine dining.

Tiffanie: Wow. That’s incredible. I recently saw on Facebook that you hosted a poet’s dinner event. How was that experience? In the event description, I read that people would have food courses, and in between you would—not serenade them—but read your poetry to them.

Clemonce: That’s a funny way to look at it. I kind of like the way that sounds. I wasn’t wooing anyone. It was a fundraiser. This was really one of the coolest events I’ve ever done. Chef Matt, who’s cooked in Portland, Oregon, Hawaii and elsewhere studied French cuisine. I sent six or seven poems to the head of the program, Dr. Lindsey Smith, and she forwarded the poems to him. So, what he did was create original dishes in response to my poems.

Tiffanie: That is so cool! I have never heard of anything like that before.

Clemonce: It is definitely up there with one my coolest readings. I would read my poems, and afterward Chef Matt would come up and introduce the course and talk about his connection with the poem that inspired him to create the course.

Tiffanie: You got to eat all the food, right?

Clemonce: Every last bite. Except the meatballs. I don’t eat beef.

Tiffanie: So, what was your favorite childhood meal that you could eat every day?

Clemonce: Spaghetti and weenies. It is like spaghetti and meatballs, but it would be hot dogs, smoked sausages and a tomato-based sauce over spaghetti. This was back when I liked SpaghettiOs and stuff. My mom would make it every week, and I loved it. Even though my dad would get frustrated seeing it every week.

Clemonce: Yeah. There’s this recipe for crawfish cornbread. It’s made with crawfish tails, creamed corn, cornmeal, two eggs, bell peppers, jalapeños, and cheddar cheese. It’s very good. A preexisting recipe I tweaked. I don’t use cheese or pimentos, and I add a couple of tablespoons of honey.

Tiffanie: That sounds delicious. I know you have notable food poems. Where do you find your inspiration to write? Do you have a certain category you prefer to write, like all food poems or anything else?

Clemonce: That’s a great question. First off, I don’t like categories. But I know that categories are necessary. I have a poem online titled “Court-Bouillon.” It’s basically a broth, but in New Orleans we have a dish called court bouillon that is a fish stew. It is usually made with redfish, and it is my favorite. I started writing this poem after going fishing with my dad. We caught two reds. He didn’t clean them, so I tried, but as he would say, “gobbed one up.”

Tiffanie: Oh no, you messed up!

Clemonce: Yes, so I decided to make it into a stew and looked up “court bouillon.” Later, while writing the poem, I was thinking of the word. It starts with talking about the name of it and how there are two different names and one of them is shortened. I started connecting how in New Orleans, most people are a fan of shortening words and names. I started thinking about the language in terms of class. It then went in a different direction speaking about a myth of feeding a king the head of a fish.

Tiffanie: Wow. Then, the poem kind of took a mind of its own and turned to a completely different direction.

Clemonce: Yes. Though I didn’t have a specific destination to begin with. I just started with food, but the poem turned into something else. Most of my food poems, really most of my poems, start small and end up in a totally different place.

Most of my food poems, really most of my poems, start small and end up in a totally different place.

Tiffanie: So somehow, it always goes back to food.

Clemonce: Yeah, of course. We all have to eat.

Read “Incen / diary,” a poem by Clemonce Heard from this same issue. 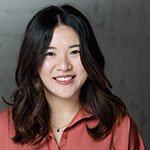 Tiffanie Vo is a WLT intern studying human relations and sociology at the University of Oklahoma. She is passionate about sharing her Vietnamese culture and advocating for Asian American rights. When she’s not studying, she is performing spoken word at local open mics and taking kickboxing classes four times a week.