Kurds, an ethnic minority living across Iraq, Iran, Turkey, and Syria, have a long history of great poets. Spanning centuries and moving from an oral to a written form of literature, poets have been and continue to be significant figures in public life. Historically, poetry was prevalent: everything from diet plans to horoscopes to private letters was written in rhymed and metered verse. Poetry was almost synonymous with writing.

Today, poetry retains a place of privilege in the world of Kurdish letters not only for its legacy but as a vital form of identity and expression. The Kurdish ethnic group is the largest in the world without its own country. For comparison, the state of Israel at its founding consisted of six million people; estimates of the Kurdish population today hover between thirty and forty million. In the 1990s, Kurds fought for and realized a semi-autonomous regional zone in Iraq: the Kurdish Regional Government (KRG). While the KRG offered Iraqi Kurds their own governance for the first time in over a hundred years, it is a far cry from what many call “Greater Kurdistan,” the entirety of the lands Kurds traditionally inhabit. So, Kurds must create their sense of nationhood, which exists only as an ideal. For this, they turn to poetry.

Abdulla Pashew and Sherko Bekas grew up with the current political leaders, under the genocidal regime of Saddam Hussein. Pashew lives in exile. From Egypt, Russia, and different countries in Europe, he articulates both longing for his homeland and disappointment in how Kurdish politicians have served their people. Bekas enlisted in the Peshmerga at a young age and worked for decades as a party poet for the Political Union of Kurdistan (PUK), one of the two major Kurdish political parties in the KRG. Toward the end of his life, he shared Pashew’s disillusionment with their government and expressed it in a book-length poem, Now a Girl Is My Homeland. The PUK quickly hushed the book up and ousted him as the editor of their publishing house. Hero Kurda belongs to a new generation of Kurdish poets and, as a resident of Kirkuk, a contested city, doesn’t have the shelter or censorship of the Kurdish government. She works as a poet and a woman to understand the internality of Kurdish identity.

All three poets elevate the public conversation of polemics into intimate reflections on who they are and how to live.

Editorial note: Read about the Kashkul cultural institute at the American University of Iraq Sulaimani. 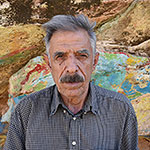 Ismail Khayat (b. 1944) is an artist of international renown. He received local and global attention for his painting and advocacy for peace between Erbil and Sulaimani after the Kurdish Civil War (1994–96). Khayat grew up in Khanaqin, in Iraq’s semi-autonomous Kurdish region. He graduated from Ba’quba Teachers Training School in 1966 and worked as an artist and art teacher in various schools throughout Sulaimani. Over the course of his life, he has been featured in more than fifty exhibitions around the world, including in the United States and Europe. See his painting, A Girl.