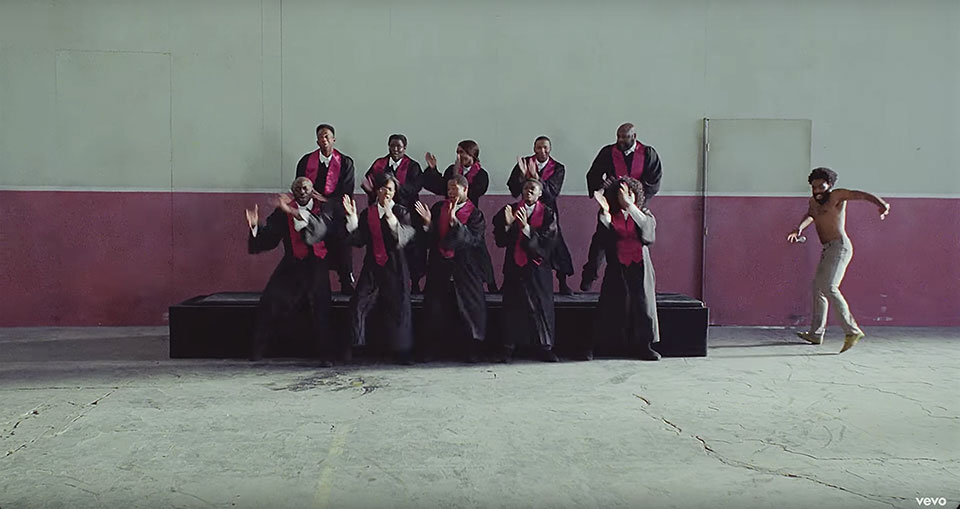 Photo: A still from “This is America” by Childish Gambino

Poet Ladan Osman considers how Childish Gambino obliterates rooted acts of black optimism and expression, leading us to understand the artist’s persona as a site upon which historical and aesthetic lineages are free to interact and contradict each other.

The direction of Hiro Murai is singular in composition, moodiness, and deft depictions of the zaniness, play, and agony that attend human desire. Since 2013, Murai has collaborated with Childish Gambino (AKA Donald Glover) to create music videos and the hit show Atlanta. Before “This Is America,” Murai directed “Never Catch Me” for Flying Lotus, where two children rise out of their coffins and dance through their haunts. It’s unclear how the children died but given our fresh grief, it was hard to disremember the shooting deaths of Michael Brown Jr and Trayvon Martin.

Murai is a master of scene-setting. “This Is America” begins in a warehouse, empty save a red banquet chair seating an acoustic guitar. At first the tone recalls Pharrell William’s “Happy,” that goofy New Black anthem. A barefoot man plays while Childish Gambino moves, similar to modern dance performances by Robyn and Sia. He’s shirtless, wearing trousers and two slim chains, seemingly carefree. But we know something is off in his glitching facial expressions. We return to the guitarist, now hooded and empty-handed as the distinctly African melody he played is overtaken by a synthetic beat. A rupture in the rhythm. Gambino takes a showman’s pose, draws a gun from his waistband, and shoots the guitarist in the back of his head. It’s a terrible moment, in part due to its deliberateness, and one I revisit over and over via reaction posts on YouTube. “This Is America,” Gambino says, handing the pistol to a boy in school uniform. The boy takes the gun in a cloth, as if it’s a relic, while two other boys, also in uniform, drag the guitarist away.

The video begins by annihilating a root in black music. Moments later, Gambino slays the heart of a black optimism.

The scene opens to a Grand Theft Auto style commotion, people waving objects and cars veering as Gambino performs dance steps recognizable across the diaspora. Four children in school uniforms accompany him with the casualness of a Vine. This relentless looping, their inattentiveness to the horrors behind them is both appalling and familiar. We’re inside a feed, subject to a stream of headlines, body counts, and our emotional static. In this carnival atmosphere, we’re forced to deal with our expectations of a black artist. How can he kill someone and dance? Gone is the millennial fancy we granted when the chorus babbled: We just want the money / Money just for you. In our disappointment, we reveal a crude polarity: ogre or Uncle Tom.

We pan at whiplash speed to a black choir singing: Tell somebody / You gon’ tell somebody. It’s a guilty moment of potential comfort, one in which someone may come with the good news. As they sing: Grandma told me / Get your money, we realize it’s a continuation of irreverence, that they’re adjacent to disaster when Gambino enters, revealing a room furnished only with a stage. He wouldn’t, we think. But our reference point is the massacre in a Charleston church. With the same speed we entered this scene, Gambino catches an assault rifle and fells the choir in less than a second. The video begins by annihilating a root in black music. Moments later, Gambino slays the heart of a black optimism. And he keeps dancing, assuring us there’s no sanctuary. Not in Noble Savage platitudes, not in a Mammy, not in any Magical Negro. His dancing repulses us but this satire isn’t as grotesque as killing 9 people, then having the stomach to eat Burger King. The point is we’re uncomfortable seeing a black man performing these actions, especially while mildly disheveled and at ease, sober but not somber. The point is our inattentiveness is designed to maintain a system that allows some citizens to act as a virus, while others become viral in death. 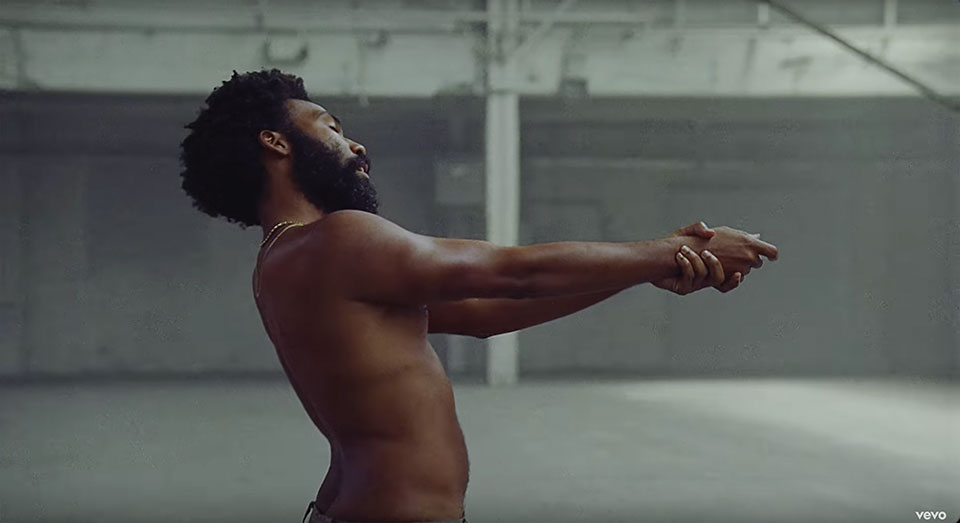 Still from Childish Gambino’s “This Is America” music video, directed by Hiro Murai.

Gambino returns to the warehouse, passing a mob, an unattended police car, hopping and whooping with an energy you know if used to chaos disinterested in our human limits. The music is layered with screams, weapons firing, and hype man ad libs. What follows is a sequence that violates almost every entry in the penal code, as well as desperation that recalls 9/11, and acts of torture and violent detainment abroad. Look what I’m whippin’ on, he says, his smooth back to the camera. By this time, we may read particular bodies as material, their continual destruction a bassline we must keep booming. The guitarist returns to play his melody, once again hooded as Gambino reinterprets Michael Jackson’s infamous Panther Dance, an extension of his 1991 “Black or White” video. For anyone who scoffs at its network ban, or doubts its significance, imagine the consequences for a black person yelling and dancing on top of a car in many American neighborhoods. We inverse out of the frame facing Gambino, go to black, then see his back as he flees, his eyes, teeth, and chains most visible when we face him again. Just a big dog, yeah / Kenneled him in the backyard. We’re no longer in the realm of satire. Blurred figures chase him and run alongside him. This isn’t a post-black moment. It’s midrace, colored by insurmountable terror.

Violence against black bodies is a foundational practice in America and has cultivated the grounds for our current disregard in the face of mass shootings. As Childish Gambino obliterates rooted acts of black optimism and expression, we may understand the artist’s persona as a site upon which historical and aesthetic lineages are free to interact, contradict each other. Gambino looms musical and movement references while performing a roll call of fellow rappers. In this act, we may also hear a quiet argument, one threaded with respectability politics, about the artist’s responsibility in a complex theater of commerce, emotion, and dignified custodianship of talent.

I play the song on repeat walking around and watch a woman playfully tase a man in a warped game of tag. I wonder what we mean when we say surreal, and if we know the difference between an illusion, and a vision that achieves the substance of enchantment. 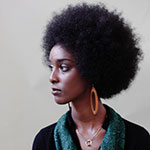