The Unknown University by Roberto Bolaño 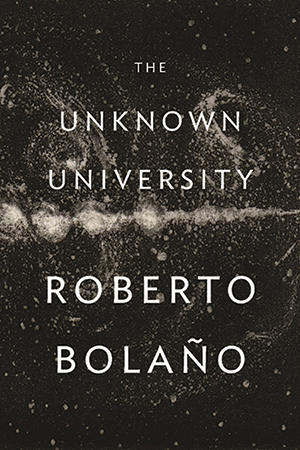 In the most recent posthumous publication of Robert Bolaño’s work in English, The Unknown University, fantastically translated by Laura Healy, the reader is exposed to some of Bolaño’s earliest and grittiest writing. The book is classified as poems, but this may be misleading, as I’m not sure we should really read these as poems at all. Of course, there are poems here, and more than a fair share of prose poems. Most of the work here is unpolished and raw, and thrilling. The bulk of the writing was composed when Bolaño was a young man, threading his way through the literary experience as only the young can. But perhaps most important is that what we experience while reading the work contained in The Unknown University is a precursor to a writer who dared to write in the face of certain death.

The Unknown University is divided into three parts, each containing its share of poems, prose poems, and fragments of a poetic mind. As with all of Bolaño’s work, those collected here represent the thoughts of the literary imagination at street level. There is none of the loftiness of a poet reaching for the stars here. Instead, we find a writer with the heart of a poet always on the edge of nightmare, lonely, and, at times, close to madness. In the poem “Ethics,” Bolaño writes: “Strange, lovely world: suicides and murders; / there’s no magnetic lady, Gaspar, just Fear / and the requisite speed of one who does not want to survive.” The tone of the poem is consistent with all of Bolaño’s work. The same themes are also evident: death, sex, writing, loneliness, and the need to connect in a world devoid of security.

Some of the work collected here has appeared elsewhere: parts of the “novel” Antwerp as well as large sections of two earlier-published collections of poetry, also translated by Healy, The Romantic Dogs (see WLT, Jan. 2010, 71) and Tres (see WLT, Jan. 2012, 68). Despite this repetition, reading The Unknown University as a whole offers us a glimpse into, if not the mind of the author, then a reflection of the author whose face stares back at us from the void. This work is not Bolaño at his best—his novels provide that for us—but they are essential works by an author we are just beginning to understand.

All of Bolaño’s writing sounds and feels as if the author was writing from the void, and since most of his work has been translated into English posthumously, he has been writing from the void. Bolaño’s writing wraps us in a ghostly embrace that refuses to let go. This beautiful oblivion that is the body of work that is in turn Roberto Bolaño forces us to stare into the void after him. What we find are not exemplary experiences but ghostly encounters with our other, darker selves.