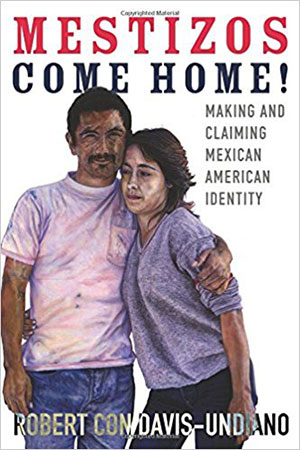 Mestizos Come Home! is a comprehensive and valuable study of Mexican American history and culture from pre-Columbian and colonial Mexico to present-day United States. With family branches in Coahuila and Oklahoma, and native to California, Robert Con Davis-Undiano authoritatively recounts the centuries-long settlement and habitation of Mexican Americans in what is now the United States.

The book’s sweeping view is interdisciplinary and critically attentive to the work of Mexican American writers, historians, and artists who have redefined the meaning of “homeland” as a place and history that must be reinvented, thus a “lost home” re-created with a full awareness of its ancient ties to the southwest region and, as of the nineteenth century, to the United States. Emboldened by the intent to view Mexican American cultural history beyond its national boundaries, Davis-Undiano extends his critical reach from “America” to the Américas, resulting in an innovative work of scholarship that bridges Chicano and Latin American intellectual history with works by Rudolfo Anaya (New Mexico), Tomás Rivera (Texas), José Vasconcelos (México), José Martí (Cuba), and Eduardo Galeano (Uruguay), to name a few.

Mestizos Come Home! is an accomplished account of how the Chicano generation embraced an idea of American exceptionalism, understood not as the destiny of a country ruled by a people who brandish their skin color as proof of superiority, national birthright, and privilege (“white” over black, brown, or peoples “racially mixed”) but as an open and free society inspired by American democratic ideals of liberty, inclusion, and the unique mission to make America a better country. In addition to the centuries-long habitation of Mexicans in the US Southwest, Davis-Undiano addresses the many achievements and contributions to the United States by Mexican Americans, with additional references to questions of demography; for instance, by 2013, the Mexican American population had reached over thirty-four million nationwide, therefore constituting a substantial part of the nation.

Looking back to democratic structures of everyday life in the Southwest, Davis-Undiano weighs on the traditional New Mexican practice of the resolana, which is a gathering of community members who meet to discuss community concerns, to deliberate on the validity of different points of view, and to reach a resolution that is the product of group debate. This Mexican American folk tradition, with its community involvement and problem-solving deliberations, is reclaimed by Davis-Undiano as a direct correlate for free speech and democratic dialogue in American society. This view of the American experience is in broad compliance with the ideals of the founding fathers, such as James Madison, who warned Americans against the tyranny of elite groups who might claim that America “was theirs alone,” thus depriving citizens of different ethnic or “racial” backgrounds of their civil rights. In a revealing passage, Davis-Undiano states: “The Federalist Papers expresses a passionate defense of democracy that trumps the Puritanical vision and the Anglo-Protestant tradition.”

Books with the range and analytical rigor found in Mestizos Come Home! generally require years of research and completion, yet this book seems to have been written as an incisive and informed response to current national concerns regarding white supremacy, fake news, governmental authoritarianism, and growing antiminority sentiments in the United States. Facing totalitarianism and race-thinking in an era that increasingly resembles our historical present, Hannah Arendt gave the world pertinent counsel: “Race is, politically speaking, not the beginning of humanity but its end, not the origin of peoples but their decay, not the natural birth of man but his unnatural death” (The Origins of Totalitarianism). Mexican Americans have also experienced the forces behind race-thinking, thematically represented in Rudolfo Anaya’s Chicano novel Bless Me, Última (1972). Última, the wise healer, directs Antonio during one of his dreams to see beyond his mestizo origins and toward the great human cycle that binds us all. In a similar vein, Robert Con Davis-Undiano claims that inquiry and scholarship must serve the community, the nation, and the world. As such, the pursuit of knowledge carries a moral imperative: to make life better for others.