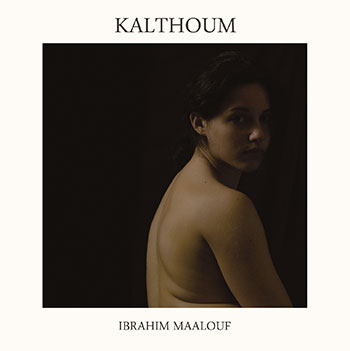 “Umm Kalthoum is the quintessential Arab,” Uncle Jihad said. “She’s probably the one person whom all Arabs can agree to love . . .”—Rabih Alameddine, The Hakawati

Decades ago, when jazz occupied a more central position in American culture, it enjoyed a symbiotic relationship with the popular music of its day. Casual fans could appreciate jazz because many of its melodies were already familiar to them as songs drawn from musicals and other popular fare. The process of jazz—stating melodies, deconstructing those melodies across a variety of soloists, then reassembling them for the final restatement of that melody—made sense to the listener because they knew the melodies to begin with.

It is in this spirit that Lebanese trumpeter Ibrahim Maalouf turned to the forever queen of Arab music, Umm Kalthoum, for the core material of Maalouf’s recent album, Kalthoum. Thanks to the singular nature of her performances, the entire record is an exegesis of exactly one song, “Alf Leila Wa Leila” (One Thousand and One Nights), codified in performance around 1969. Kalthoum modulated the length of her performances based on the expectations of her audience, clipping them down to a mere ten minutes for foreigners while expanding them to well over an hour for domestic audiences, who would demand with their applause that she repeat key phrases over and over while they basked in a state of mystical union (known as tarab) with the music.

A curated playlist of Umm Kalthoum’s music
featuring one of the tracks from Kalthoum
reviewed here.

Maalouf’s interpretation of this timeless classic passes the first and most important test: it’s really good jazz whether or not the listener has any awareness of the source material. Pianist Frank Woeste opens the album with a spare reduction of the prelude before the ensemble, powerfully propelled by drummer Clarence Penn, arrives in unison to deliver the opening theme. Maalouf and Woeste, who are credited with conceiving the album’s arrangement, engage in some measure of harmonic sleight of hand as they embed a chord structure around a melody that was largely monophonic in its original incarnation, as is the case with most Arab music. The result is something that sounds less exotic than one might expect until a short solo interlude from saxophonist Mark Turner sneaks in a few lines embroidered with a noticeably arabesque filigree.

Once the piece is underway, Maalouf and company keep the affair tight and to the point. Whether interpreting the orchestral lines in the two-part “Overture” or Kalthoum’s winding vocals later in the record, improvisation takes a backseat to the sensual exploration of the melodic lines as they spool and unspool from the core composition. Bassist Larry Grenadier joins with Penn and Woester to form a muscular rhythm section capable of credibly welding Latin, swing, and funk rhythms to melodic ideas once underpinned by the idiosyncrasies of Arab (and specifically Egyptian) drum lines.

While there is little expectation that jazz will ever span the breach that has opened between it and the rest of American popular music, Kalthoum offers a tantalizing reminder of how powerful that symbiosis once was. Though Umm Kalthoum died in 1975, her status as an icon of a secular, pan-Arabic, and more peaceful Middle East remains untarnished, and her feats of musical bravura are still respected and remembered. As the transformative power of jazz drifts ever further from the place and culture that birthed it, hope springs eternal that it may take root elsewhere with the same vigor exhibited on Ibrahim Maalouf’s Kalthoum.