Birthplace and home of poet Dylan Thomas for more than half his life, the coastal city of Swansea in southern Wales echoes with his legacy—a residual haunting by its most-loved son. From the village of Mumbles on the Gower Peninsula in the west to the centrally located Cwmdonkin Park to the Maritime Quarter in the east, hardly an inch of the city exists that does not pulsate in tribute to the life and work of one of the twentieth century’s most influential writers.

A walk in the footsteps of Dylan Thomas begins at his childhood home and birthplace, which still stands as it might have during his adolescence at 5 Cwmdonkin Drive. Open to the public, no area of the narrow little home is roped off, allowing guests to experience a heightened intimacy in each room. A stone’s throw from the house sits Cwmdonkin Park, a favorite haunt and inspiration for several of Thomas’s poems and radio broadcasts, where a view of Mumbles Head is clearly visible to the west. A member of the Swansea Little Theatre, Thomas spent a great deal of time haunting the pubs on the Mumbles Mile when rehearsals were on breaks. Additionally, the Mumbles bubbles and froths with inspiration for Thomas’s Under Milk Wood, perhaps his best-known play, about a sleepy little Welsh village and the omniscient Captain Cat, whose likeness stands in the Maritime Quarter. Just beyond Captain Cat lies a statue of Dylan himself, peering out over the marina from his chair near the aptly named Dylan Thomas Theatre, home of the Swansea Little Theatre Company. 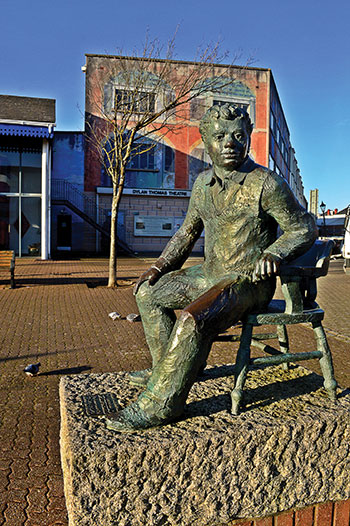 The hub of all things Dylan Thomas, however, is the fairly new Dylan Thomas Centre, housed in Swansea’s former Guildhall, and opened in 1995 by President Jimmy Carter. Equal parts bookstore, exhibition space, art installation, memorabilia collection, and memorial, the centre, while paying homage to its namesake, is also an educational resource for adults and children alike. The permanent exhibition, “Love the Words,” chronicles Thomas’s life and death as well as his relationships with and influence on such artists as Pablo Picasso, John Lennon, and Bob Dylan, whose stage name is a direct link to Thomas. The centre hosts workshops, exhibits, and organizes the annual Dylan Thomas Festival each autumn. Though he later moved to the village of Laugharne and died in New York City shortly after his thirty-ninth birthday, Thomas held that Swansea was “an ugly, lovely town . . . crawling, sprawling . . . by the side of a long and splendid curving shore. This sea-town was my world.”

Logan Webb is an art student at the University of Science & Arts of Oklahoma currently studying abroad in Wales.