One of my favorite recent maxims about becoming better stewards of the earth is this one from waste-minimizing chef Anne-Marie Bonneau: “We don’t need a handful of people doing zero waste perfectly. We need millions of people doing it imperfectly.” These words serve as a motivator. Rather than feeling petrified by the urgency of our planet’s condition, it is worth it to carry on. Every little bit we do to preserve and respect our home is worth doing.

As I researched artists and photography for the cover of World Literature Today’s climate change issue, I had many moments of feeling futility and discouragement. Extreme flooding in Peru. Glaciers in the Alps where the Swiss cover them in massive white blankets—an annual attempt to slow the melt. Climate change protests. Sights of Bangladesh’s receding coastline. Thumbing onward through photos of Bangladesh, I was struck by the piercing gaze of a Rohingya refugee in a Bangladeshi camp. This young boy with a stern yet pleading stare may soon be a climate refugee as well. The whole process was sobering.

And yet I felt a hefty appreciation for the observers. For the scientists and artists venturing out and telling the stories of these regions of the planet in danger, spending hours upon hours dialoguing with their surroundings in an attempt to communicate our precious world to us through photography, paint, pastels, sculpted aluminum, and more. I dog-eared a lot of these artists along the way. The nine listed below are just a small sample. I hope you’ll also find their works both impressive and moving, and I hope their art will resonate as an invitation to also pursue “real-life experiences with nature,” as Chris Arthur heartily recommends in his essay “Escaping Indoors.”

Zaria Forman is our cover artist for this issue. Her drawings from Antarctica were what first captured my eye—the detail in her soft pastel work is so precise that at first I thought I was looking at a photograph. How many hours of observation would it take to perfectly replicate such vast scenery in chilling, vibrant, large-scale drawings? Forman created her work on the cover of the summer issue after a four-week art residency aboard the National Geographic Explorer, where, as Forman says, “I hope my drawings make Antarctica’s fragility visceral to the viewer, emulating the overpowering experience of being beside a glacier.”

Forman has also flown with NASA on several Operation IceBridge missions, exhibited in Banksy’s Dismaland, and her work is being exhibited now through September 30, 2019, in the metamorphosis: changing climate exhibit at the Hearst Gallery in New York City. For more, watch this National Geographic video where Forman describes the glaciers in Greenland and NASA scientist John Sonntag expounds upon the technical details of these data-collecting missions.

Environmental artist and activist Jenny Kendler’s sculpture Birds Watching contains a flock of one hundred colorful birds’ eyes, each depicting an avian species considered threatened or endangered by climate change. Her piece accompanies Alberto Chimal’s cli-fi short story in the current issue, and its haunting beauty was exhibited at the Storm King Art Center as part of the Indicators: Artists on Climate Change exhibit in 2018. Kendler states that her works attempt to complicate the space between nature and culture as a way of re-enchanting our relationship with the natural world. She has been commissioned to create environmentally oriented public art in locations such as Chicago’s Millennium Park, Philadelphia’s Fairmount Park, the Louisville Riverwalk, as well as an isolated desert in Arizona and a tropical forest in Costa Rica.

Elizabeth St. Hilaire is a collage illustrator, and her piece The Aquarium accompanies poetry by Jane Hirshfield in the current issue. Reflecting on this piece, St. Hilaire said it both represents her idyllic memories of fishing with her father as a child and the modern worries about polluted waters and fish not surviving in their changing salt- and freshwater habitats. She says, “Not only are many fish no longer safe to serve for dinner . . . but researchers have also found that warming water in streams, rivers, and lakes are changing the habitats and behavior of fish, resulting in a wide range of impacts in different parts of the US.”

Probal Rashid is a photojournalist and documentary photographer. He’s received numerous awards for his work, and some of his recent photography collections document the effects of climate change in Bangladesh. Rashid’s photo story on the river delta crisis in Bangladesh documents how the rising sea is affecting the country’s coasts, and his portrait series on climate survivors shows the faces of Bangladeshi people who have been affected by escalating natural disasters. As Rashid notes, the United Nations Development Program has observed that projected sea level rise will directly affect the lives of thirty-five million people in the coastal areas of Bangladesh by 2050.

Jasper Doest is a Dutch photographer who aims to give a voice to the natural world. He is a senior fellow of the International League of Conservation Photographers and a Dutch World Wildlife Fund ambassador. Some of his most captivating photographs illustrate the impact of landfills on the environment as well as the Arctic regions of our planet that keep our world’s climate in balance. Doest most recently won a 2019 Sony World Photography Award in the Natural World & Wildlife category—you can read an interview with Doest at somersethouse.org.uk. 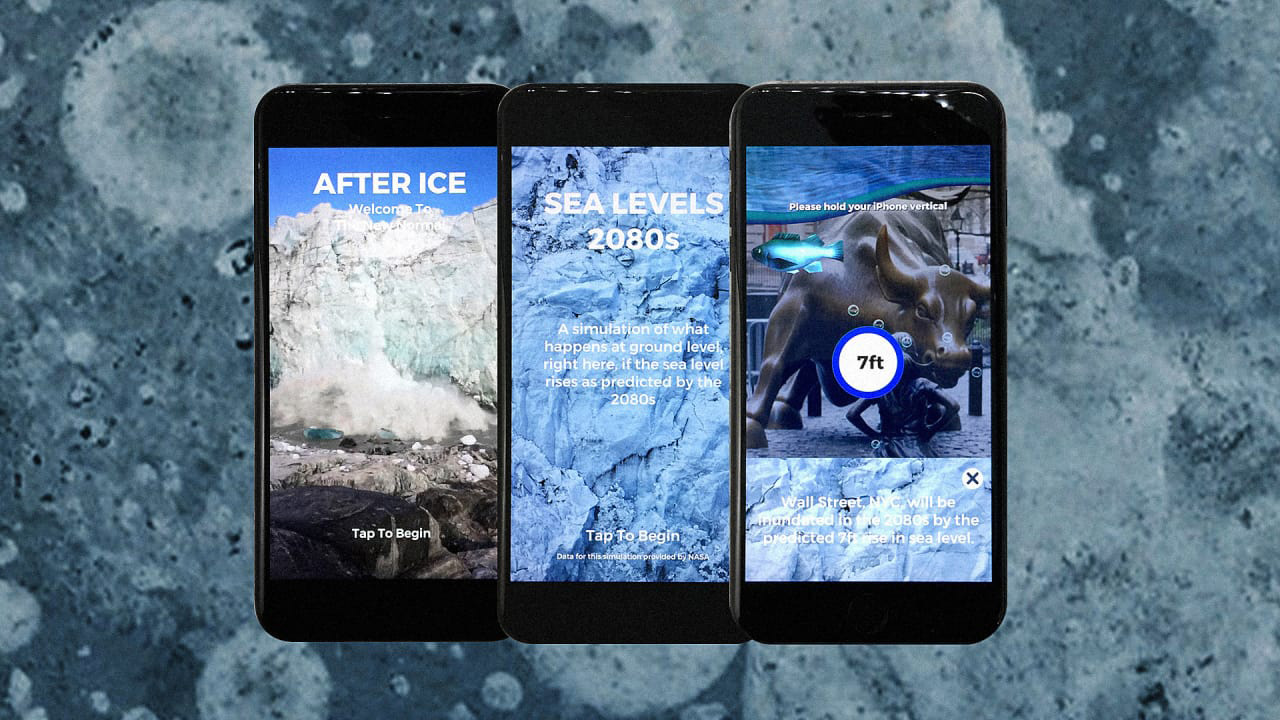 Frequently partnering with artists, researchers, and scientists, Justin Brice Guariglia’s art addresses climate change and reflects on the Anthropocene. One of his recent projects is the After Ice app, built in collaboration with app development studio Strange Flavour. The phone app uses augmented reality to show the user how high seas will rise in relation to where they are standing. His works showcased in Earth Works: Mapping the Anthropocene include pieces he made after flying with NASA’s Operation IceBridge scientists in 2015.

Virginia Hanusik’s work dissects the relationship between landscape, culture, and the environment. Her photo series titled A Receding Coast examines South Louisiana, which is experiencing rapid coastal erosion, losing land the size of a football field every thirty minutes. Her photos examine the history of building practices and architectural adaptation in southeast Louisiana, showing an American landscape that may soon be completely underwater.

Courtney Mattison is an artist and ocean advocate—her intricate ceramic sculptures articulate the fragile magnificence of coral reefs and the human-caused threats these reefs face. Her sculptural installations have been commissioned by the U.S. Department of State’s Office of Art in Embassies, the Nova Southeastern University Oceanographic Center, and private patrons’ permanent collections. Mattison says, “As a sculptor and ocean advocate, I believe art impacts our emotions and can move us to value the blue planet we live on in ways that scientific data often cannot. We protect what we care about and we care about what we know and understand. Art can bring the beauty and peril of reefs above the surface and into view and can inspire us to protect the ocean.” 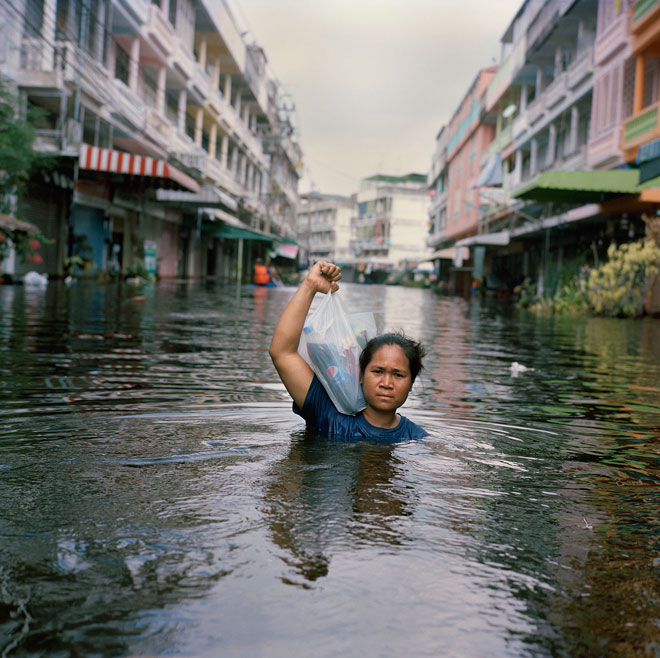 Born in Johannesburg, South Africa, Gideon Mendel is an award-winning photographer who has spent the last decade on an ongoing project entitled Drowning World. The project is his artistic response to climate change, and the works within it document submerged landscapes. Some of his works use an unusual approach to portraiture. These diverse portraits from people all over the world illustrate how our shared experiences of climate change transcend geographical, social, and cultural divides—everyone is vulnerable.

These creatives are only a small sampling of visual artists who are working to communicate about climate change in impactful ways. The list goes on. If you’d like to add your recommendations for climate change artists to follow, I invite you to tweet them to @worldlittoday with the hashtag #climatechangeart.