Vitoria Correia and Nathaniel Tylor in Black and Blues / Jordan Nicks, director of photography / Courtesy of the Flight Agency

Author’s note: “Chasing Light” serves as a companion piece for the dance film Black and Blues, an adaptation of a prose poem by the same name written by Neustadt Prize–winning author Boubacar Boris Diop.

My hope for the dance film as well as this piece is to capture brief moments of ordinary life for two people before everything changes and they find themselves in harrowing circumstances in order to survive. This is the story of many migrants all over the world who are forced to leave their home.

Diop’s “Black and Blues” paints a vivid picture of place and wrestles with his subject’s complex relationship to the sea as both a life-giving and life-taking entity. What is seemingly a mundane part of a fishing village becomes a great obstacle to cross for safety, due to economic hardship. Our small cast and crew uses this conflict as a catalyst for our own Black and Blues.

We are on a beach.

The horizon line is a sherbet orange that bleeds into pinks, purples, eventually fading to blue.
It is the magic hour.

A young woman sits in a seagrass-braided chair. A young man stands above her with his hand on her shoulder.

She reaches for his hand. They stare stoically at the camera. He leans to the right and cradles her head in his left hand.
He looks at her lovingly.
He bends down and joins her.

The young woman arches her back, falling backward into his lap, her fingertips and headwrap graze the ground, she recoils with a gasp, completing the movement with a tight embrace.

The light has turned everything golden, and what is present for us feels like a fleeting memory for them.

I close my eyes.

We are on a beach in the middle of Oklahoma. At the edge of a man-made reservoir, chasing the light far from the shores of Dakar or Cap-Haitien.

The camera tricks the eye into believing we are thousands of miles across the ocean.

Time is suspended for two people in love.
They will part ways soon.
Together is no longer an option.
The work has dried up.
The fish are disappearing.
The perilous journey across the sea is the last resort.
She will stay and take on his role.
She will manage.

The sounds of the spinning boat propeller move us forward.

The warm light disappears and makes way for the Black and Blues.

Time only exists in the in-betweens.

He submerges beneath the surface of the water, quietly gasping for air.

I close my eyes.

They dance. It’s soft and tender, limbs gliding through the air. Feet wrestling with the sand.

A smile creeps across his face.

She offers a prayer for safe passage.

He offers a prayer for her safekeeping.

Editorial note: Diop’s “Black and Blues” appears in Mediterranean: Migrant Crossings, edited by Bhakti Shringarpure et al. (Warscapes/UpSet Press, 2018), 8–9. The Black and Blues film adaptation—co-directed by Marie Casimir and Jessica Karis Ray, choreographed by Marie Casimir, composed and with audio design by Ioannis Andriotis, and starring Vitoria Correia and Nathaniel Tylor—premiered on October 26, 2022, during World Literature Today’s annual Neustadt Lit Fest. This project was made possible, in part, by a grant from the Norman Arts Council and the National Endowment for the Arts. 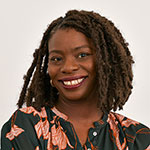 As the curator of public programs and performance at Oklahoma Contemporary, Marie Casimir leads the development of exhibition and contemporary art-related programming that emphasizes diversity, innovation, collaboration, and community. She brings thirteen years of experience and a passion for engaging artists and community members across imaginary borders, both geographic and social, through art. She is an arts administrator, producer, multidisciplinary performing artist, and educator, and she has been an adjunct lecturer in the Clara Luper Department of African & African American Studies at the University of Oklahoma. Marie received a Heartland Emmy nomination for I Dream of Greenwood, her most recent collaboration with World Literature Today. Her dance films have been featured in several festivals, including Austin Dance Festival, Dancecinema (Vancouver), DOSABMA, [email protected], and Greensboro Dance Film Festival. Casimir’s staged works have been featured at various venues in the US, including Links Hall, Constellation, Contemporary Arts Center New Orleans, the Music Box Village, Oklahoma Contemporary, and the University of Oklahoma. She is the recipient of a Ragdale Artist Fellowship and a past SixTwelve Artist in Residency.