Letter to a Lovelorn Oklahoman

In August 2021 University of Oklahoma alumnus Ron K. Jones donated a letter that he had received in 1959 from Boris Pasternak (1890–1960) to OU Libraries’ Western History Collections. In October 1958 Pasternak had been awarded the Nobel Prize in Literature but, under pressure from Soviet premier Nikita Khrushchev and the Union of Soviet Writers, declined to accept it. WLT is proud to publish Pasternak’s 1959 letter here for the first time along with a note by Nicolas Pasternak Slater, Mr. Pasternak’s nephew.

From Peredelkino, Russia, to Norman, Oklahoma

In the spring of 1959, as the Cold War raged between the former Soviet Union (present-day Russia) and the United States, two strangers, who shared a common bond, exchanged letters. One stranger, Ron Jones, was a brokenhearted young man who would soon graduate with a business degree from the University of Oklahoma. The other, Boris Pasternak, was (by this time) an oppressed poet, writer, and translator of great literary renown. The bond they shared was the epic novel, Doctor Zhivago, which Pasternak completed in the mid-1950s, had smuggled out of the Soviet Union by Giangiacomo Feltrinelli in 1956, and published in 1957. Upon its release, the novel was translated into numerous languages, including English.

Ron Jones was fascinated by the novel because a young woman he was dating constantly raved about the book. To impress her, he read it numerous times. Though they were scheduled to attend a spring dance at his fraternity, she was not impressed and broke off the date. As a result, Ron grabbed his typewriter, locked himself in the women’s restroom at the Phi Delt house (this after taping an “out of order” sign on the door), and wrote an impassioned letter to the author of Doctor Zhivago. Pasternak’s response to Ron’s letter specifically demonstrates the author’s contempt for those literary critics attempting to impose various meanings and symbols onto the novel. 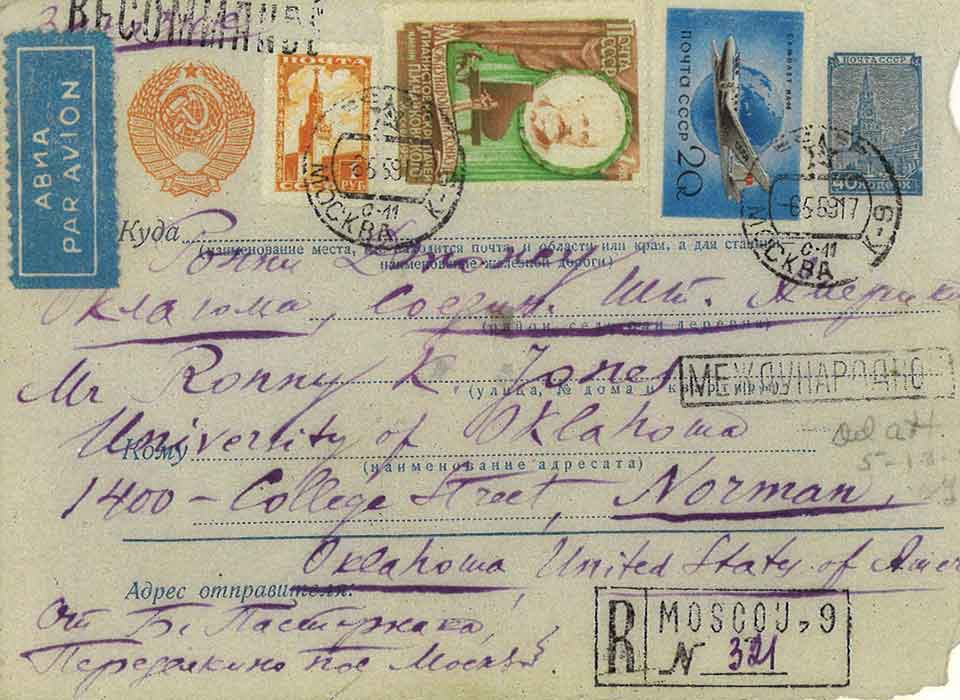 MY DEAR RONNY K. JONES, may good fortune always and everywhere accompany you in your life, as you have had it with me; here is my answer you desired and dreamed of.

Your fellow students are right in many respects. Not all written letters from me and to me reach their goal, not all arrived letters am I able to read to the end, especially the handwritten and the long ones, rare and very few of them have I time and possibility to reply. So much the more will I profit by the transient opportunity of [. . .] writing to you to say in passing some casual truths.

I read praising eulogistic English articles on “Dr. Zh,” searching after separate hidden senses behind each word of the novel, suspecting deep symbols in every small, insignificant and shallow detail; making whole allegorical constructions out of such, obtained in that way comments, ascribed to the text. It is an error, a deplorable, measureless exaggeration.

The main property or feature of the book is the flow of astonishment, of the novelty and singularity of the usual, that permeates the book. This breath is a common faculty of the volume, not a particular statement or truth to be found and cited on a certain place where it had been put.

Art in general, every art is symbolical in a whole, large sense of directed attraction or force, and not in the meaning of rebukes or charades, consisting of many partial riddles to be guessed separately and then joined together for the final solution.

Not only art, language, every language is still more symbolical, but also in the sense of indifferent meaningfulness, in the significance of spiritual energy or activity. Language is connected with reality and life, history of language is partly history of facts and countries, of developments and ages. Surnames of persons are everywhere derived from names of things. But will it hence appear that each isolated name or image or situation of my novel should mean more than it simply and modestly means; or that each item, each particularity of my narration, like little photographs on the walls, are thoughtfully and intendedly fixed upon the text by little nails of minute and stupid allegories and nicknames? Such explications are pure and incredible absurdity.

I thank you for your greetings and return them gratefully.

Publication of the English-language edition of Doctor Zhivago was soon followed by a controversy about the possible symbolic significance of some elements of the novel. Edmund Wilson published an essay in Encounter magazine titled “Legend and Symbol in Doctor Zhivago” (1959), which promoted such a symbolic interpretation. (For example, the novel has a recurrent image of a billboard advertising agricultural machinery, and the advertiser’s name, Vetchinkin, looks like the Russian word for “ham”—was this an allusion to Hamlet?) This approach was vigorously contested by Pasternak’s sister Lydia Slater in her essay “Pasternak and Wilson,” published in the next Encounter. Boris wrote to compliment her on it, being himself clearly irritated by such allegorical distortions of his work. In the letter to Ron Jones, he restates his feelings about the true meaning of what he wrote. Everything in life, he implies, is rich in meaning on its own, not symbolic of something else.

Editorial note: Ivar Ivask’s review of the English translation of Doctor Zhivago appeared in the Winter 1959 issue of Books Abroad, and four previously unpublished letters from Pasternak to Ivask, dating from 1959–60, were included in the Spring 1970 issue of Books Abroad that contained a symposium in memory of Pasternak on the tenth anniversary of his death.

Todd Fuller is a poet and curator of the Western History Collections and William Welch Professor at the University of Oklahoma.