On January 19, 2022, André Leon Talley’s voice fills my small bathroom in Alicante as I attempt box braids on myself for the first time. He’s reading from his memoir, The Chiffon Trenches, which I’ve opened as an audiobook. My head is half shaved in a generous undercut, but I estimate my braids will still take at least three or four hours to complete, and the book’s nine hours is comforting company.

I was nowhere near ready to read news of his passing. Over the years of the pandemic, I imagined meeting him and telling him that I had named my son André Lee in his honor. I could see Talley as a tourist in sunglasses and a cape walking down the palm-tree-lined esplanade in Alicante with its undulating dark slate-gray and pale-red tiles. One picture in a tribute by Hamish Bowles strikes me as possibly the first photo I’d ever seen of Talley: “André Leon Talley in a cape by Nicolas Ghesquière. Photographed by Hannah Thomson, Vogue, November 2006.” He’s beaming, hands on hips, standing in front of a huge gold-and-white piece of artwork hung on a pale-pink wall, a color scheme I realize I’ve re-created in my living room with light-pink and white walls with a spray-painted gold accent archway.

On the first night of braiding, I complete fifteen braids and text my sister in Austin. “I love it. That is going to take forever,” she replies. I’m attempting to make half-inch squares, running the same bright-blue comb my father used firmly against my scalp and pulling the strands apart into sections. Per the internet’s advice, I’m straightening each section with a hot iron and moisturizing generously, and the first braids come out flawlessly slick. My husband has fallen asleep, and I need his help to part my hair in the back, so I pause Talley’s voice and go to bed.

When I was pregnant, I wanted a unique name for our child. My sister named my niece Tyla, a combination of her name, Terra, and mine, Layla. I loved Mahler’s Symphony no. 5 and imagined calling a little Mahler from across the playground. Everyone disagreed. I also loved the vowel-rich Aurelio or Aurelia, but my sister declared them unpronounceable. Working at our heavy wooden kitchen table, I went down a rabbit hole of Talley’s interviews after revising a poetry manuscript containing a poem dedicated to him, my only poem dedicated to someone I’ve never met.

Talley bestowed historical context and cultural heft to elements of fashion I was embarrassed to admit I liked.

I don’t remember what made me want a subscription to Vogue in high school, but I do remember turning to his “Life with André” column and always reading that first. Talley bestowed historical context and cultural heft to elements of fashion I was embarrassed to admit I liked and felt at a loss for how to articulate why I liked them. My parents met in law school, and fashion magazines were seen as unserious. I was a bit embarrassed by being so drawn to Vogue, and I remember my father cautioning me against the anorexically thin models and telling me it was an unhealthy image to aspire to. I vaguely remember trying to explain that they were just moving hangers, and I didn’t want to look like them. I was always on the tall side, and part of me sensed how validating it would be to be the face of a brand, but I also struggled to see myself as a normal woman. I liked hunting for unique finds in the vintage shops on South Congress where I went to middle school. I liked wearing dresses with a 1940s silhouette; they made me stand up straight. I was never bold enough to wear a cape, but I still regret not buying a houndstooth cape the color of a dark Weimaraner and cream in a shop on South Congress because at seventy-five dollars it felt too expensive and too eccentric. 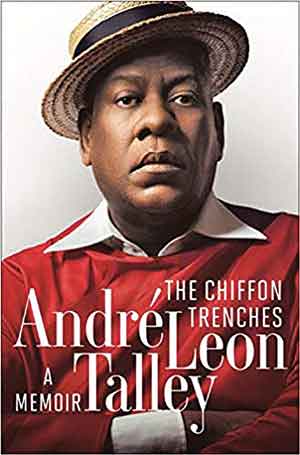 When my husband came home from a tiring day of teaching, I suggested the name André, and he liked it. I showed him who I was talking about, and he, being a musician, said, or like André 3000 or Dr. Dre. I insisted that I meant a very specific André, but he also has an uncle Andy, and I have a cousin Andrew, and somehow we’d fallen into a family name. My maternal grandmother was Carrahlee, and so André Leon became André Lee. Between an English Andrew, Spanish Andrés, and French André, we ended up choosing one of the most common names in the world.

Yet André Leon Talley was one of the least common people on the planet. While Talley often spoke of famous French courts, the Italian term sprezzatura is fused to my conception of him. In a British literature course in San Antonio around 2010, we discussed the influence of Baldassare Castiglione’s The Book of the Courtier (1528) on English culture and ideas of manliness. For these roundtable lectures, I liked to sit at the professor’s righthand side. I was excited by the concept of sprezzatura and hoped to embody it myself, knowing that, aside from combat, I already had many of the physical qualities alongside excellent horsemanship paired with that certain nonchalance. Aside from my own aspirations, Talley leapt to mind as someone whose encyclopedic knowledge and elegance came with an air of studied carelessness. When I first saw him on the pages of Vogue in my midteens, I was pulled by this possibility of suits and caftans and capes in lush fabrics. Eccentricity in motion. Talley looked like no one I had ever seen before, with the spirit of artists I’d idealized who hovered between masculine and feminine energies like Frida Kahlo.

I looked up to Talley and thought, This is the kind of thinker I could be. I wanted to draw on deep knowledge and not just notice but accurately articulate connections across the arts. His absolute refusal to deny a fine-art status to clothing emboldened me, and his profile of Maria Felix’s famous crocodile necklace stayed lodged in my mind years after I’d read his column. My poem “Moth & Rust” argued against the edict of Matthew 6:19–20. In the King James Version of the Bible, the lines are translated:

I wanted my treasures precarious and on earth and found in Talley’s effusive telling of Felix’s eccentricities a champion:

I’ve never been able to verify if the story is true, but the crocodile necklace inlaid with emeralds and yellow diamonds has a wonderfully lifelike look, especially where their bellies fold into their legs. They look alive.

After my son was born, my mother informed me that in a tornado of cleaning and rearranging (she’d moved back in with my father after a few years of separation and divorce), they had thrown out all the Vogues I’d saved from high school. It felt frivolous to mourn those magazines, especially with a new baby in my arms, but I thought of my infant’s namesake and all those little essays molding in a dumpster or shredded and recycled. They were dog-eared copies, and pages had been ripped out to be taped, first on the walls of my dorm room, and then on various apartments, including in my first tiny room in Murcia when I moved to Spain in 2014. I’d left many poetry collections, novels, and clothes with my family in Austin, so I also had no grounds to throw a fit about fashion magazines no one else put any stock in. Thankfully, I have some torn-out pages with me still like a well-loved Irving Penn photo of Icelandic poppies, which Vogue commissioned from him for their 2006 Christmas issue.

The unexpected loss of the 2000’s Vogues punched an irrevocable hole in my writing life, as I’d kept planning on revisiting “Life with André” for further poetic inspiration. “Moth & Rust” had allowed me to explain some of my eccentricities to myself:

I am building up an army
of things I want, of beautiful women
and the things they want. I want
to want like them

. . . I want
an army that keeps each lonely lonely
away, I want to want like they want
in the city: high glass and metal want.

How do you stay lit when what inspires you is taken away unexpectedly?

It wasn’t just his manner of dress or ability to explain the significance of beautiful objects but the way he traveled that inspired me to establish a life very far from where I was born and raised. Talley lived in Paris for years and received a Chevalier de l’Ordre des Arts et des Lettres, an honor he shares with James Baldwin. How do you stay lit when what inspires you is taken away unexpectedly?

I’d never braided my own hair beyond large French braids, which wrapped from my crown or temple into simple braids. My father braided my hair when I was younger, and he had infinite patience and dexterity with intricate cornrows in perfect straight lines or ones that leapt over each other and crisscrossed. Sundays were for washing and rebraiding. Something about the news of Talley’s passing made me want to spend some time with my own head, and as I listened to his voice extoling the virtues of deep study, I thought about what I wanted to carry into my own life. In remembrances of him, his kindness and his chivalry are mentioned again and again. Talley had an unshakable, southern faith that reminds me of my paternal grandmother, Inez. As I part, straighten, and detangle each section, twisting the strands together, I think about how I might live and how I should be unapologetic about who I am. I think about making myself an expert and our shared heritage necessitating a kind of work ethic and how I am now able to take so much for granted.

Talley had an unshakable, southern faith that reminds me of my paternal grandmother, Inez.

I felt sure I would meet him one day. I say his name daily, because I gave it to my son. 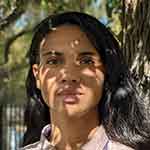 Layla Benitez-James is a 2022 NEA fellow in translation and the author of God Suspected My Heart Was a Geode but He Had to Make Sure, selected by Major Jackson for Cave Canem’s Toi Derricotte & Cornelius Eady Chapbook Prize and published by Jai-Alai Books. More writing can be found in Black Femme Collective, Virginia Quarterly Review, Latino Book Review, Poetry London, Acentos Review, Asymptote Journal, and Poetry Foundation’s Harriet Books.