I tame the shadows and become one of them

Author note: For some time now I have admired the collages of Ghislaine Lejard, who has often recruited my poems for the “modest books” she creates conjointly with her works. It therefore seemed quite natural when I proposed to her the series of poems in Son corps d’ombre, which were written during the period of mourning following the death of my husband. I’d had the occasion to see and was moved by a gathering of her collages because they so closely echoed the atmosphere of these poems—the majority of which were then included in the book we created (email to translator, December 13, 2021). 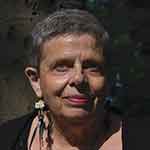 Born in Flanders and dividing her time between Nice and Parma, Marilyne Bertoncini is a teacher, poet, and translator. Her most recent publications include La Noyée d’Onagawa (Jacques André Éditeur, 2020), Son corps d’ombre (Éd. Zinzoline, 2021), and a translation: Gili Haimovich’s Soleil hésitant (Jacques André Éditeur, 2021). Since 2016 she has been the co-director of the online literary review Recours au Poème. 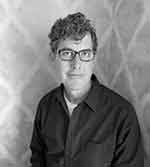 Daniel Simon is a poet, essayist, translator, and WLT’s assistant director and editor in chief. His most recent edited collection, Dispatches from the Republic of Letters: 50 Years of the Neustadt International Prize for Literature (2020), was nominated for a 2020 Foreword INDIES Award.