after Rembrandt’s Young Woman at an Open Half-Door (1645)

Beautiful are the shoulders sinking into the shadows
locking her chest, rich as an orchard. Only her radiant
face, a dream, suddenly appearing, corresponds
to the slim fingers that rest on the low threshold door.

In the trees of hours, river clock carries away another leaf.
From her eyes, half-lowered, mysterious, flows out
a tranquility that blinds. Her eternal calm faces a hurried
but limited life when in an evening, by chance, she casts a glance
that lasts at this ever-changing world.

Translator’s note: In her early twenties, Zheng Min was influenced by some of the most important early modernists in China such as Feng Zhi, Bian Zhilin, Shen Congwen, Wang Zuoliang, et al. while a student at Southwest United University (a joint unit of Beijing University, Qinghua University, and Nankai University) during World War II. “A Glance” (undated) was first published in 1946. Her first collection of poetry, Poems 1942–1947, includes a few other poems inspired by paintings, showing her early interest in art. Using paintings, sculpture, and music as springboards to poetry informed Zheng’s practice throughout her writing career, which reflected the influence of Wen Yiduo, but she seemed to focus more on the visual effect and musicality of the total structure of the poems running through the lines. Zheng Min (1920–2022) was one of the most important poets from China. She taught poetry at Beijing Normal University from 1960 till retirement in 2006. Her Collected Poems appeared in 2016. Also an accomplished translator and critic, she published Contemporary American Poetry (1987) and four books of critical essays on Western philosophy and comparative poetics. 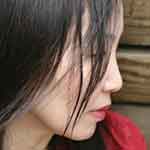