IF YOU SEE this city for the first time, it may seem as if it has just sprung to life overnight, such is its chaotic charm; it sits atop an elevated earth at three thousand meters above sea level, surrounded by mountaintops covered in lush eucalyptus forests. It once boasted of inhabiting an awfully dormant seismic region, and one can still witness its rapacious past, through the still-active geysers infesting the lower neighborhoods of Filwoha. The air is cool and crisp, though it will get substantially thick and smoke-filled, especially as you make your way into the heart of the city, where it will come fully alive, bubbling, bustling, a clear sign of a place that has outgrown itself over the last few decades.

Truthfully, Addis Ababa is a city with many, many hearts, depending on where you’re coming from and where your passions lie. There are neighborhoods like Mercato and Shiro Meda, which are always swarming with merchants, sellers, and folks of all kinds, filled with the latest trends in textiles and goods, always loud, always welcoming. Then there are old neighborhoods, like Piassa, with its fine line of theaters, bakeries, cafés, and jewelry shops, bringing ancient charm to a new city. Or newer and hip neighborhoods, such as Bole, which has become the commercial center of the city, and a reflection of its swift and nauseous modernization, with its glassy-eyed skyscrapers, balmy roads, and pristine-looking small boutiques and spas. Or perhaps one could venture into the iconic Meskel Square, its quiet force reminiscent of Tahrir Square in Cairo or Tiananmen Square in Beijing, at times filled with protesters in the evenings or marathoners in the early mornings, and at times scooped out of itself, hollowly staring out into the depths of the city, both an eyesore and a third eye to those who wish to fill its corners and make their voices heard.

Of course, the real charm of the city comes from the peripheral neighborhoods such as Mekanisa or Yerer Ber, the latter of which I grew up in; in their earliest days, these were filled with large and thick forests, and wild animals, surrounding the city with the same village-like enchantment one gets when visiting the nearby towns. But over the last couple of decades or so, these neighborhoods have outgrown themselves as the city has too; instead of its forests, one can now boast of its futuristic buildings, its all-encompassing malls, the outrageous number of cafés, which seem always endlessly populated. But within this, a city that has been furiously building and rebuilding itself, are also its ancient pillars; over one hundred embassies and consulates peppered throughout the neighborhoods, trade schools and small colleges, art galleries, museums, and so many adebabay, squares in large and small neighborhoods, all equally holding the bone of the city.

But if there is one thing Addis is known for, it is actually for its mixed cuisine; whether you are craving a spicy kategna, a buttery kitfo, or simply wanting an elaborate breakfast, there is something for everyone, and that’s when you really see it—the bustling of it all, the chaotic beauty of the city, not only engrained in its new and old neighborhoods, but in what it is able to bring together; the pulsation of it, the liveliness, the familiar sounds of chatter in different languages, the gurshas, the wafting of spices, coffee beans, and new pastries, springing new life into an ancient city that has yet to be bound as such. 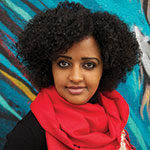