Doors in a Meadow by Bratislav R. Milanović 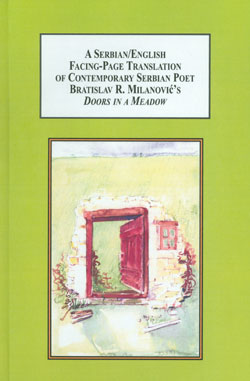 In this bilingual edition of Vrata u Polju, awarded Serbia's Prosveta award in 1999, Biljana Obradoviﬂ faithfully renders Milanoviﬂ's long lines, preserves where possible his alliterative patterns, and carefully selects the English words that function as powerful signs throughout the volume. The voice of this collection—written post-Bosnian War and before, during, and just after the NATO bombings of Milanović's birth city, Aleksinac, and current home, Belgrade, in spring 1999—is both haunted and haunting. Yet unlike the poems of Novica Tadić, with their dark grotesques, these celebrate life's small beauties. Despite "mushroom clouds" and "markets where . . . cashiers overcharge / the poor," the persona of "The Unnecessary Chronicle" asks, "Who needs a chronicle that records only fraud and pestilence / instead of a hand reaching to grasp the extravagant day?" In "As If Submerged in Water," the persona "suck[s] pieces of the summer: markets, sparrows / preening their feathers on a watermelon rind . . . such beauty, completely unnecessary to existence, / but without which / the world would be an unnecessary place." Milanoviﬂ's "lonely scribe" finds solace in the Orphic myth and the natural cycle, where death brings rebirth.

"Tripartition for Aleksinac" clearly enunciates these themes as the speaker ponders the NATO bombing of his first home: Though "bathed in death, / under April plum trees in bloom, / between tulips blown apart by the black hawks' breath," he must rescue not Eurydice but his city. Finally he "drag[s] up the wreck of history," "return[s] to a faith in the half-dead," and "resurrect[s] those walls demolished by madness" as "The scattered city has hoisted itself from its sacred ground, alive again, and it climbs / to the heavens, toward its children, raising itself."

Staircases, hills, and liminal spaces pervade these poems, as the Orphic persona traces his archetypal descent and ascent. Pondering what might come if, as in Faust's augenblick, a fair moment should last, he realizes that "death itself will be prolonged / and that is why it is better, when the hour comes, / to push off completely, towards the bottom." One must die to be reborn.
The eleven poems from "Doors in a Meadow" recapitulate these signs and themes. As doors open "on a silent staircase" that "rises towards the sky," the persona asks, "Are we expecting someone to arrive, / or is it that we're departing before it's time to go?" He wonders, "Why have we chosen to recline here, on this threshold, without / a church?" A tolling bell, heard in other poems, marks "the passing over the threshold." In the eighth poem, noting abandoned weapons from all eras of Serbian history, the speaker reflects, "Who needs them now, before the gate of doom?" The final poem, meanwhile, "To Verica" (Milanoviﬂ's wife), embodies resurrection. The first lines of its first three stanzas begin, "Before these doors we stand," while each ends differently: "dear," "transparent," and "purified." This progression enables the conclusion: "before these doors through which one can only depart / we stand pure as we once were / before these doors we stand ready to enter / only to leave."

Despite the tragic recent history of Yugoslavia and Serbia, this fine collection embodies hope: "love will mean love until, / in the freezing desert, / it quietly builds a nest from which / the world will be reborn" ("Small Lamps in the Darkness").