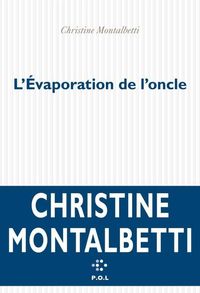 In a rural and agreeably timeless Japan, an uncle disappears—or rather evaporates—from his brother's home. Many years later, his nephew goes in search of him, leaving his own home in turn and setting out on a difficult quest whose outcome is by no means guaranteed. Christine Montalbetti tells that story in an unhurried manner, stopping along the way to point out features of the landscape that we might otherwise have missed. This is a novel that takes its time and pays attention to small things, such as silverfish, centipedes, grasshoppers, and mosquitoes, not to mention earwigs, bedbugs, and slugs. The human fauna are also common species, but each person has a story to tell, and that storytelling leads us into intriguing worlds whose existence we did not suspect.

From time to time, fantastic happenings assail us. Given certain conditions, late at night when everyone is asleep, ordinary household objects can come to life and express themselves. A teapot bemoans the fact that it is constantly placed on the fire; a paper lantern becomes a raging face; a dishrag mutates suddenly into a demon. More conventional kinds of adventure can be found here as well. There is even a duel between two samurai, bloody enough for the most sanguinary of readers; but we cannot know for certain if the nephew witnessed it, or only imagined it—nor perhaps does it matter very much.

Montalbetti is keenly attentive to surfaces, most notably smooth, reflective surfaces like the ones presented by a lacquered table, by silk cushions, by a tea caddy, or by the skin of a lover's shoulder. The narrative surface that she constructs in L'Evaporation de l'oncle is likewise smooth and reflective, polished, subtle, and full of nuance. Yet beneath that surface, Montalbetti suggests, secrets lurk, some of them isolated and apparently unconnected, some to the contrary deeply embedded in other secrets just as deeply concealed from view. She sketches those buried secrets with the lightest of touches, playing suavely as she does so upon notions of novelistic teleology and readerly anticipation. In that fashion, Montalbetti encourages us to think about storytelling and its uses, and more particularly about the set of attitudes, norms, and expectations that we assemble when we sit down to read a novel. Those readers who choose to sit down with this novel will discover a fascinating and deeply invigorating piece of work, produced by a writer who finds fresh things to say, and ingenious ways to say them, in each new book.