In the Shadow of Al-Andalus by Victor Hernández Cruz 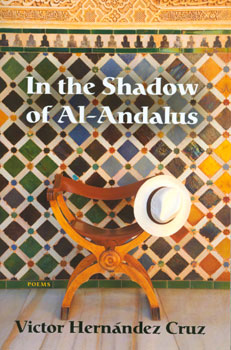 In the Shadow of Al-Andalus opens with a selection of epigraphs one might expect in a scholarly publication. Quotations by the medievalist María Rosa Menocal and the eleventh-century Córdoba poet Ibn Hazm, among others, illustrate the context of the works that follow, though here that context is the author’s invention. “I am asking questions of history and have answered them through imagination,” Victor Hernández Cruz explains in the introduction, an eloquent and lushly written contemplation of the historical, cultural, geographic, linguistic, musical, and literary “knots [and] layers of weaving” that inspire his poetry.

Just as rich is the network of literary and musical allusions in the poems. From the troubadours, Alfonso el Sabio’s Cantigas de Santa Maria, and the Jewish and Arab intellectuals of medieval Spain to popular poetic traditions such as the romancero, fado, and cante jondo, Hernández Cruz’s inspirations and poetic affinities are close to the surface. In “The Dance of Blood,” an Antillean woman with Amazonian, Berber, African, and Andalusian substrata epitomizes the forces of transculturation, as in Julia de Burgos’s “Ay, ay, ay de la grifa negra” and Nicolás Guillén’s “El abuelo.” “Listening to the Music of Arsenio Rodríguez Is Moving Closer to Knowledge” suggests Lorca’s New York poem “El rey de Harlem” as much as it pays tribute to the Cuban tres musician named in the title and celebrates drum and string music on disparate continents. “Vicente Espinel—La Décima” explores the migration of the décima, a ten-line stanza that has taken many shapes in poetry and song through the centuries, including in present-day Louisiana among the descendants of immigrants from the Canary Islands.

Such connections and migrations underlie all twenty-eight poems of In the Shadow of Al-Andalus. North Africa, Manhattan, Mexico City, Cartagena de Indias, Jordan, Sepharad, and numerous other places are explicitly named. Some poems unfold primarily in one place, others in various spaces. Multiple epochs are similarly evoked and conflated, most notably the present with the medieval Spanish past. This geographic and temporal confluence captures the idea of the Andalusian “shadow” that extends to Morocco, Puerto Rico, and elsewhere.

“Motion is my home town,” Hernández Cruz writes in “Manhattan Transfer” as he reminisces about the city he moved to from Puerto Rico as a child, a topic he reprises in “Clan,” a twenty-one-page poem that marks the middle of the book. Above all, both poems also underscore that the “collision / with a new language” in this migration to New York created a “cubist canvas / fragmentation” that complicates and enriches his literary language. Hernández Cruz embraces this collision and fragmentation: “It makes for a slant and a twist in both my thoughts and word patterns that I have learned to cultivate.” In the Shadow of Al-Andalus makes for a spirited new take on the convergence of language, poetry, and identity in the Spanish-speaking world.