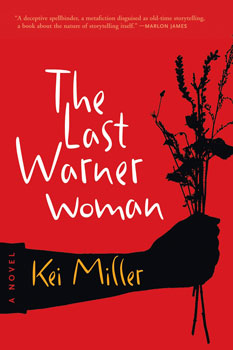 The Last Warner Woman features compelling settings, masterful story-tellers, a mystery, colorful characters, and language that resonates with beauty. The novel can also be read as an unobtrusive treatise on storytelling that invites comparisons between Western ways of knowing the world and traditional ways of understanding the world. It is presented not as a contest, but rather a statement of how we see individually and collectively.

The story is divided into four uneven parts: part 1, “in which the story begins”; part 2, “in which the story prepares to travel, and then begins again”; part 3, “in which others bear witness to the story”; and part 4, “in which the story invents parables, and speaks a benediction and then ends.” A young girl, Pearline Portious, goes to live in a leper colony in 1941 to make a colony of many colors. Her penchant for knitting doilies with colorful yarn as opposed to the traditional white might serve as a metaphor for the people who belong and those who do not. Pearline Portious gives birth to a little girl, Adamine Portious, who comes of age and moves from the colony to a Revivalists camp (she discovers she has the gift of “warning”), then to London for an ill-fated marriage, then to an asylum for the mad, and back again. The characters encountered along the way are enduring. Like the circular story, each character adds his bit to the telling—some bits seemingly not as relevant as others—yet connected nonetheless.

The novel is laced with wonderfully engaging language revealing the spice of each character: “Like many Jamaican market women, Maizy was a creature for whom derision was an art.” It is also rife with subtle humor reflecting the human condition. In England, Adamine’s husband describes her response to his flat offering: “She began unleashing such a string of curse words that had she been in Jamaica where they still charged people for indecent language, she would have been broke after five minutes.”

In her preface to the book Woman, Native, Other: Writing Postcoloniality and Feminism, Trinh T. Minh-Ha explains that never does one open a conversation by coming directly to the point, “For the heart of the matter is always somewhere else than where it is supposed to be . . . no need for a linear progression which gives the comforting illusion that one knows where one goes.” Miller’s novel is a study of Minh-Ha’s observations as he explores issues of displacement, multiple identities, and fragmented selves, to name a few, in this solidly written work. Kei Miller offers two related works in his epigraph: Edward Baugh’s “The Warner Woman” and Grace Nichols’s “Hurricane Hits England.” The essence of the two poems is deftly woven into the fabric of the novel. The origin of the Warner Woman is Jamaica, and her sojourn to England reveals how “old tongues” wreak havoc in new places. As the narrator relates, “Every book must begin somewhere, but it begins in different places for different people. . . . But for the writer, the book would have begun somewhere else altogether.”