Words, Not Swords: Iranian Women Writers and the Freedom of Movement by Farzaneh Milani 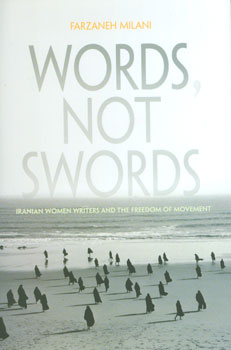 Through passionate personal accounts, close readings of Iranian literature, and astute observations of the culture, Farzaneh Milani explores the paradoxes inherent to her native country. In this engaging follow-up to her first novel, Veils and Words, Milani interprets women’s literature and its ability to demarcate the constraints placed on women writers in Iran and how words have the ability to reveal and conceal, connect and divide, express and repress. This nonfiction narrative includes the history of the veil and gender segregation and describes Iran’s rich history of storytelling with three sections devoted to Iranian female authors, including Simin Behbahani, Tahirih Qurratul’Ayn, and Forugh Farrokhzad. All these women shaped Iranian literature into what it is today and broke free from the typical constraints placed on women writers. With her extensive knowledge of the cultural mores of Iran, Milani unflinchingly explores the country’s fundamental patriarchal values in a way that any reader, whether learned in Muslim studies or not, can understand.

As implied in the title, she explains what freedom of movement actually means for both men and women, and how the veil can easily become a mobile prison. Women may vote and run for government office, but they are forced to adhere to a mandatory dress code, exemplifying the fact that Iran is entrenched with the ideology of segregation based on sex. Milani argues that the female body “has been increasingly used as a battlefield, a metaphor, an emblem” by the Iranian government “in the name of Islam or nationalism.” The government uses the symbol of the “ideal woman” to impose its theological ideology on the masses, which further perpetuates the archetype of a silent, submissive woman.

Milani uses modern examples like the Iranian hostage crisis of 1979 and the attacks on September 11, 2001, to address a monumental issue: the ways Americans perceive the Middle East. Because of stereotypes perpetuated through literature, often with a lack of historical context, many in the United States misread Iranian women. This literature can reduce Iranian women to passive-aggressive, silent protesters represented by the veil, instead of powerful women who, through both silence and violence, are continually reforming cultural frames and boundaries. This misunderstanding suppresses women writers who are fighting to succeed in the male-dominated discourses of Iran.

Words, Not Swords’s intersection of literary criticism, multiculturalism, and feminism offers an enlightening, insider viewpoint of the perception of women in Iran. Rather than ignore the political and cultural implications of Islam on Iranian society, Farzaneh Milani resolutely addresses these issues with courage and intensity, and describes the vibrant culture of her homeland.